Sounding the TTIP alarm across the European Union

Canada is the most sued country in the ‘developed’ world, and that should be cause for grave concern, argues Maude Barlow. 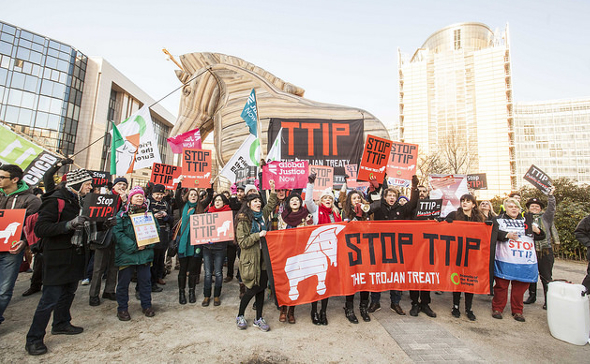 Several weeks ago, hundreds of thousands of people across Europe and Britain marched to protest against the Trans-Atlantic Trade and Investment Partnership (TTIP), a massive planned new trade deal between Europe and the US. They were rightly sounding the alarm, as TTIP will greatly reduce the ability of local governments to spend public money for local development, impose new limits on the right of governments of all levels to regulate on behalf of their citizens and environment, endanger public services and jeopardize Europe’s higher standards on labour, food safety and social security.

TTIP also includes Investor State Dispute Settlement (ISDS), a provision that will allow US corporations to sue European governments for laws and practices that threaten their bottom line. There are now over 3,200 bilateral ISDS agreements in the world, and foreign corporations have used them to sue governments over health, safety and environmental laws.

But people in Britain and Europe should be paying attention to another deal that has had way less attention. CETA – the Comprehensive Economic and Trade Agreement between the EU and Canada – is equally disturbing and much further along in the process. I’m on a speaking tour of Britain to share a powerful story of Canada’s experience that is relevant for two reasons.

The first is that we Canadians have lived with ISDS for 20 years. It was first included in NAFTA, the North American Free Trade Agreement between Canada, the US and Mexico, and has been used extensively by the corporations of North America to get their way. As a result of NAFTA, Canada is now the most sued developed country in the world.

There have been 35 corporate ISDS challenges against Canada and we have already paid out over $149 million to US corporations. Foreign investors are seeking another $1.93 billion from the Canadian government in new cases and Canada has already spent over $49 million defending itself from NAFTA challenges. Two-thirds of the claims involve challenges to environmental protection or management of our own resources, issues that should reflect the democratic will of the people of Canada.

No surprise, the US has never lost a NAFTA case. In this game, the big guys generally win.

The other reason people of Britain and Europe should care about Canada is that the CETA is a ‘done deal’, meaning that, even though it has not been ratified politically, the negotiations are finished and they contain ISDS provisions. CETA could act as a ‘back room’ for US corporations whether TTIP is adopted or not.

There is a great deal of opposition to ISDS in TTIP; so much so, that many think either ISDS will have to come out of the deal or be radically modified, or it will be defeated in Europe. Already, the European Commission has proposed ISDS ‘reforms’ to TTIP that would set up a new European Investment Court that would be more transparent and accountable, although still unacceptable to most of us.

But all a US agriculture, energy or drug giant would have to do to take full advantage of ISDS is use its existing subsidiary in Canada, or set one up, and sue European governments through CETA. US corporations would have as much access to challenge Europe’s higher standards under CETA as if TTIP with a full ISDS had been signed.

There’s very little in these ‘trade’ deals that is actually about trade. They’re much more about handing over frightening new rights to corporations that fundamentally challenge the way that governments legislate on behalf of ordinary people. It’s no wonder that a UN expert on human rights recently referred to ISDS as ‘an attack on the very essence of sovereignty and self-determination, which are founding principles of the UN.’

People in Britain should learn from our experiences in Canada and understand that this new generation of trade deals poses a terrible threat to the health of their people, the resilience of their communities, the fate of their public services, and the protection of their natural resources.

Maude Barlow is on a speaker tour in Britain called ‘Stop the Transatlantic Trade Deals’ alongside Yash Tandon and Nick Dearden. From 1-9 November they will be appearing in Dundee, Leeds, Manchester, London, Oxford, Cardiff and Dublin. See here for more info. This article is cross posted from Global Justice Now.