25 years ago in New Internationalist... 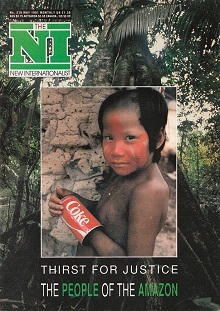 How to do justice in this tiny space to the massive contribution made by David Ransom to New Internationalist magazine over the past two and a half decades (see our tribute)? He conceived, wrote and edited at least 37 magazines of his own while countless more, ostensibly edited by others, benefited from his insight and constructive criticism. His first magazine in 1990 was on trade and, although he embraced a wide diversity of topics over the years, from mental health to the war on drugs, oceans to tax justice, he returned again and again to the iniquitous effects of unjust trade terms on poorer people and countries. He addressed the big picture in our first major critique of globalization in 1997, examined fair trade in 2000 and attacked the World Trade Organization in 2001. But he also tackled the topic from the bottom up through innovative magazines introducing us to the lives of peasant producers of coffee and bananas.

If I have to choose a single piece of writing to remember him by here, though, it will not be one of his keynote editorials, brilliant though many of them were. It will be this wonderful episode from his epic boat journey up the Amazon River in 1991: ‘Hell hath no hammock’ (nin.tl/hellhammock) is brimful of David’s self-deprecating humour. Farewell, old friend.

Animal wrongs
A cleaner cup of tea
Back