Praise, blame and all points in between? Your feedback published in the May 2016 magazine. 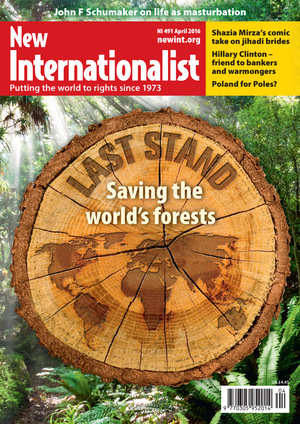 Shape of things to come

Re: Colin Roche’s Agenda piece on TTIP (NI 491). If this assault on democracy is ever established, things will be made a great deal worse. Public services of every kind, including what remains of the National Health Service, will be taken over by big businesses for private profit. The market will rule – individual choice (by those able to afford it) will be the system.

If big business is hindered in its takeover by the government, it will sue for millions of (fictional) loss of future profits. This action will not occur in the regular courts of law but in tribunals run by corporate lawyers from these big businesses. The governments of Australia and Germany have already suffered from such trade deals.

From the ground up

Re: Roberto Savio’s Essay (NI 490) ‘Who gives a damn about democracy?’ In his book The Human Zoo, Desmond Morris wrote about people living in small communities, only through democracy. In the Old Stone Age, people lived in tribes whose members all knew one another and worked with one another. According to Morris, when the number of members in a tribe grew to about 100, some would move a distance away, and make a new tribe. Although most people nowadays don’t live in tribe-size communities, many are able to live democratically as neighbours, members of clubs, family members.

In The Long Road to Freedom, Nelson Mandela recalled how he, Walter Sisulu and others strengthened the African National Congress by devising channels through which any ANC member who wanted could make a suggestion or other statement. In each neighbourhood, each group of six houses would have a spokesperson who would pass on messages to their District Leader, who would in turn pass them on upwards and sideways.

Bear to have less

Yes, yes, yes, to the heartfelt understanding shown over the refugee dilemma (NI 489) – but what about the root cause of all this suffering: the overpopulation crisis?

This mass movement is just the beginning. It took until c1800 to create the first billion people, now it takes just a decade or so. We should all be worried about this – especially the politicians.

More than a billion people are without enough good food and water or proper healthcare. Have we learnt to love ourselves so much that we cannot bear to have less? The ‘less is more’ cliché is all too appropriate.

We need to reduce population growth and put serious economic help into developing nations so that there will be less incentive for people to leave their homelands.

Bridget Anderson’s fine essay (NI 489) rightly identifies some of the reasons behind the West’s rejection of refugees. I add some more:

1. Amnesia. Up until about 30 years ago, many people were alive who remembered the World Wars, and their massive flows of refugees. Consequently, there was an unquestionable morality that refugees were to be welcomed, assisted and given asylum. That memory is now largely erased.

2. As a result of the neoliberal economic model, impoverishment in the Global South is now extreme, and of the West’s own creation. No wonder so many are economic migrants.

3. The neoliberal ideology is now well embedded in the West’s collective consciousness, so that the emphasis is on individual ‘betterment’, no matter the social cost. Refugees threaten that self-centred model and reintroduce the sharing of resources.

Replacing neoliberalism with the alternatives so well expressed by the Transition movement can lead to refugees being treated as people again.

In Mark Boyle’s discussion of violent versus nonviolent protest (Essay, NI 489), he says ‘wise discernment’ is important. But his title, ‘The VIOLENCE of nonviolent protest’ is unnecessarily provocative, and too much a stretch of the truth to be considered a ‘wise’ treatment of this centuries-old debate.

It’s one thing to debate nonviolent versus violent protest; but it’s a completely different thing to accuse nonviolent protesters of violence. By making this accusation, Boyle’s argument is sounding like enforcers of army drafts/conscription and those who oppose conscientious objectors.

Re: ‘Tax Rebels Unite’ (Agenda, NI 489). Ethical Consumer have long been advocating a fair tax, and have been heavily involved in the creation of the Fair Tax Mark (fairtaxmark.net). While it is grossly unjust that corporations get both to avoid tax and bargain with HMRC and equivalents, it is surely counterproductive to try and mirror their insidious tax arrangements. Far better to model, celebrate and encourage fair tax and integrity. Spare a thought for those of us living in ‘offshore financial centres’, where the narrative of the dominant finance sector does a pretty good job of silencing dissent or diversity of opinion. There are some small encouragements, and ordinary citizens here are also concerned about unjust tax arrangements.

See taxwatch.im for an example on the Isle of Man.

Regulation Top Trumps
The language of peacekeeping
Back