It's 50 years since West Papua first won independence, only for Indonesia to cruelly snatch it away. Nick Harvey reports on the tensions in the region. 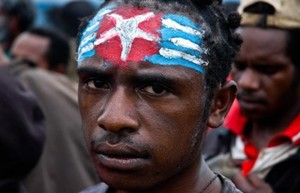 A protester in West Papua, face painted with the ‘Morning Star’ flag.
Photo by Alexander P.

On December 1, 1961 West Papuans raised their ‘Morning Star’ flag to proudly declare independence from the Dutch. But the celebrations were short-lived. The following year Indonesia invaded, in what was to begin a cruel occupation that continues to this day.

Fifty years on, raising the same flag in public attracts a prison sentence of up to 15 years in an Indonesian court. Yet despite the potential consequences, thousands of West Papuans took to the streets on Thursday to demand their right to be free.

‘The situation in West Papua is really tense at the moment,’ says Benny Wenda, a West Papuan independence leader living in exile in the UK. ‘There’s been a big military build up leading up to this anniversary and the security forces have a terrible record of dealing with protests.’

In October this year at least three West Papuans were killed and scores wounded when Indonesian soldiers and police attacked those gathered outside a Papuan People’s Congress meeting in the main city, Jayapura. Since then tensions have been rising in the region and there is a real fear that hostilities could spill over during Independence Day demonstrations.

‘The situation is a time bomb,’ says Dominic Brown, a filmmaker who made a documentary on the West Papua independence movement. ‘The Papuans are getting more and more desperate and the Indonesians are trying harder and harder to suppress any dissent, so things are bound to come to the surface soon.’

‘They are looked on as second-rate citizens. They don’t get any jobs; the Papuans are on the streets selling vegetables on the floor while all the shops and taxis are run by Indonesians.’

Tensions also exist between West Papuans and Indonesian migrants in the region. After occupying the territory, Indonesia began a series of migration programmes, giving poor Indonesians, mostly from Java, financial incentives to move to West Papua. Today, West Papuans, who made up 96 per cent of the population in 1961, have become a minority in their own country.

‘It’s disgusting seeing the treatment West Papuans get from the Indonesian migrants,’ says Brown. ‘They are looked on as second-rate citizens. They don’t get any jobs; the Papuans are on the streets selling vegetables on the floor while all the shops and taxis are run by Indonesians.’

Despite legal scholars from around the world recognizing that West Papua has a solid case for independence, the issue has only been paid lip service by Western powers that have their own interests in the region to consider.

‘It all comes down to multi-nationals and their relationships with governments,’ says Brown. ‘Rio Tinto has a massive mine in West Papua and on top of that America wants to keep Indonesia onside so it has friends in the region to balance out the influence of China.’

And Indonesia’s influence can be far reaching. Earlier in the year, Interpol issued a red notice for the arrest of Benny Wenda for alleged offences he committed before he left the country in 2003, charges which Wenda denies. But it means that if he leaves the UK he is liable to be arrested and returned to Indonesia. 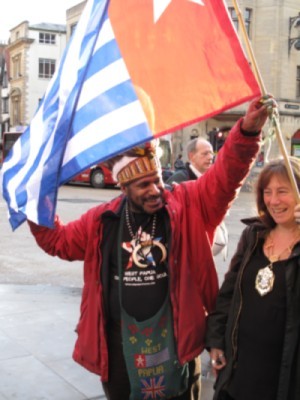 Benny Wenda raising the West Papuan flag with the Mayor of Oxford on Thursday morning.
Photo by Nick Harvey.

‘Benny Wenda has travelled half way around the world to escape persecution but he continues to be threatened from afar by Indonesia,’ says Jago Russell, chief executive of Fair Trials International. ‘Interpol must remove the politically-motivated red notice against Benny and improve its accountability mechanisms so that it can live up to its stated commitment to political neutrality and human rights.’

But Wenda is undeterred. After raising the Morning Star above the town hall in Oxford on Thursday morning, he travelled to the Indonesian embassy in London to hand in his own notice calling for the arrest of Indonesian president Susilo Bambang Yudhoyono.

‘There has been a secret genocide that began under Suharto and was continued by all the Indonesian presidents who came after,’ says Wenda. ‘They are illegally occupying West Papua which makes them criminals. So I’m putting out my own red notice to let the Indonesian president know that if he ever comes to Britain I will arrest him!’

Wenda’s thoughts are, however, very much with the people still inside West Papua at this incredibly tense time. Foreign journalists are barred from West Papua so it is difficult to verify stories coming from the region. But apart from the unconfirmed reports of shootings by security forces, it seems a serious violent crackdown has yet to happen. Despite the media shutout, West Papuans urge the international community not to ignore what is happening there.

‘It is very important the world keeps a focus on West Papua today,’ says Wenda. ‘I don’t want it to be another massacre like East Timor 10 years ago when the world turned a blind eye and intervened too late.’

Arms trade infographic
Can Zambia stand up to China?