Praise, blame and all points in between? Your feedback published in the October 2017 magazine. 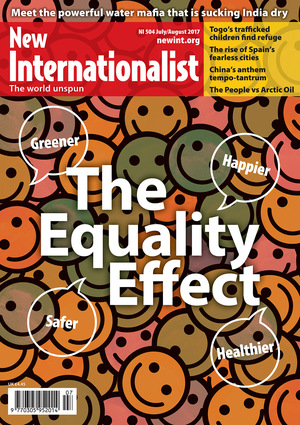 Danny Dorling’s excellent The Equality Effect (NI 504) omits a crucially important aspect of the story: equality is essential for technological innovation; its absence actively reduces our technological options; and ensures that those that survive are used in ways that intensify human immiseration and ecological impact. These inequality-driven impacts escalate, and can only escalate, as technologies advance.

For example, the technologies we now call ‘new’ (electronics, digital computers, radar, microwaves, jet propulsion; not to mention the science of cybernetics, etc) are mostly products of the ‘great compression’ of wealth and income differences from the 1930s till the 1970s and, in particular, the egalitarian ‘all in this together’ spirit that prevailed in crucial areas of society during the Second World War and its aftermath. Many of these technologies had been entirely feasible decades earlier, but it was the collapse of elitism and expansion of life-opportunities for ordinary people before the mid-1970s that allowed them to become features of the real world.

The subsequent turn away from equality not only saw a decline in radical innovation, but also killed off some of the most robust and parsimonious new technologies (electronic analogue computing, and massively parallel computers, for example). Today’s dominant technologies owe their survival far less to any social benefits than to their roles in inter-corporate and military rivalry – which they serve at escalating environmental cost: eg Greenpeace’s discovery that, by 2007, the internet’s consumption of fossil fuels and CO2 emissions were eclipsed only by the US, China, Russia and Japan. And this was supposed to be a ‘weightless economy’!

I give a fuller account of this phenomenon in my book The Bleeding Edge: why technology turns toxic in an unequal world (New Internationalist, 2016). Writing it, I came to the conclusion that if we want a habitable planet, we must have equality, and stop being so mealy-mouthed about challenging inequality (for which, as Danny so amply demonstrates, there is no conceivable excuse anyway).

Some people may call this Utopian. So be it. But any notion that we can achieve a sustainable world while tolerating inequality is utter fantasy.

Respect for me is the direct cause of equality. Your feature looked at inequality from international and political perspectives. Whilst I and other readers can appreciate this information, not everyone in society is so world-minded.

My trip to the local pub yesterday confirmed how disrespectful people can be. Minutes after arriving, I saw a group of women chastising a gay man. Another man called a security guard every name under the sun. I’m not saying that everyone should get along, but there is a problem when this basic lack of respect exists.

I’m writing to complain about the Polyp cartoon in NI 504. I understand (hard to miss) that several of your contributors assign the blame for most of the world’s ills on religions (it’s repeated in the Only Planet cartoon in that edition) but this Big Bad World cartoon is just an insensitive pop at God which I find offensive.

If you are a non-believer (as I surmise Polyp is) then all these woes must be down to people, religious or otherwise, so let’s set the target there.

The robots are coming!
Open Window - Begging for War
Back