A new public transport system is designed to halt the terrorizing of drivers and their passengers, but residents fear the state is powerless against criminal gangs.

Owning a car is not an option for most people in Guatemala – half of the country’s population subsists on less than $2 a day. Instead, they rely on public buses to transport them around. But when gangs control the capital, Guatemala City, this is often more dangerous than it sounds.

For over a decade, gang leaders have preyed on Guatemala’s only public transport system, extorting bus drivers, their assistants and even passengers in return for protection against other gangs. This ‘safety tax’ is, in effect, an obscene amount of cash that these criminals charge; if their victims don’t pay up, the consequences often arrive stained with blood. 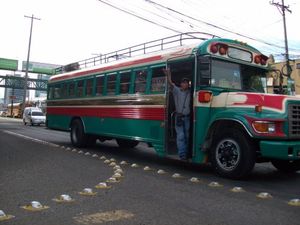 Drivers are regularly killed at the wheel if they fail to oblige gang leaders. Last week a man was shot dead on board a bus just outside the capital; witnesses say the 28-year-old bus assistant was killed because he couldn’t meet his extorter’s demands.

The problem is getting worse

Last year 130 bus drivers and 53 bus assistants were murdered in acts relating to extortion, according to figures released by the Guatemalan newspaper El Periódico. This year looks set to be even bloodier – 96 people have already been killed in the last five months alone. Gang leaders use violent public acts to intimidate others; the people are frightened, but not defeated. On Saturday, bus drivers in San Juan Sacatepéquez, just outside of Guatemala City, staged a 12-hour protest, pleading with the police for protection against extortionists.

In a bid to increase safety levels throughout the capital, the government recently introduced a new transport system called Transurbano. Passengers board buses with prepaid travel tickets, so the drivers don’t carry cash. The buses even come equipped with panic buttons, CCTV cameras and armed guards. The project has become so successful that the number of bus routes throughout the city has recently been increased. 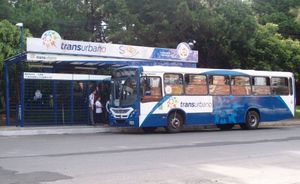 However, since increasing the number of Transurbano buses reduces the number of other ones available to extort, not everyone is happy. Over the past few weeks gangs have hit back. They kill innocent people and leave messages next to their dead bodies, threatening the government with more blood if the new pre-paid public transport system is expanded.

A fortnight ago a woman was found decapitated alongside a note which read: ‘If Transurbano does not co-operate, this is what is going to happen to the owners and partners; I have a lot of information and I know where they live.’

Is it too late?

These brutal murders are an almost daily routine for Guatemalans. Prosecution rates in the country remain low. Decades of neglect from both the current government and the past ones have resulted in gangs running the capital and breeding destabilization and fear into its residents.

Although the government is now trying to improve safety on public transport, many people worry it’s too late. They believe Guatemala already is in a state of emergency. To them, each violent death on public transport demonstrates the authorities’ failure to provide security to their people.

Photos by the author.

Just Do It: a film on climate activism
Back