Worshippers of the Almighty Invisible Hand 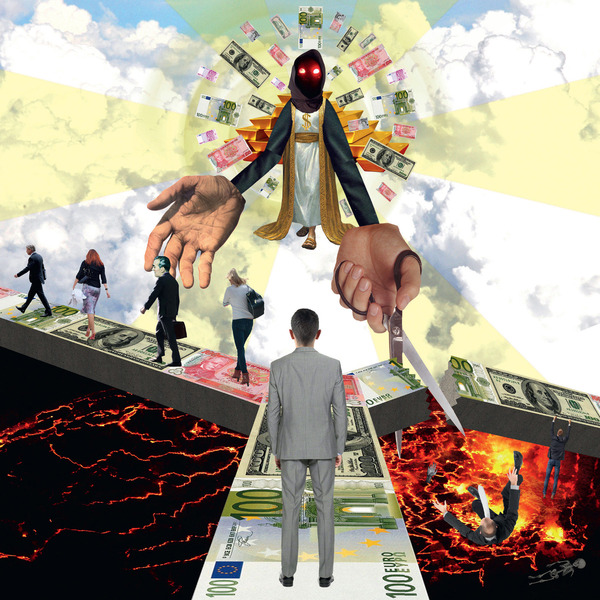 In the religion cleverly mislabelled as neoliberal economics, it is an article of faith that clearly assigned property rights, along with fully flexible prices, will allow the Invisible Hand – aka the glorious God of all neoliberal economists and their faithful believers – to direct resources to their most efficient and valuable use. Economies bestowed with these two virtues of private property and unfettered markets are bound to travel the path of glory and redemption – the God-given glory of a strong, sustainable growth path, with the redemption of all economic resources being fully employed at all times, barring the possible exception of random shocks to supply, like wars and pestilence.

The fact that in our actual historical experience, economies have often failed to travel on a path that even vaguely resembles full employment growth, often for long periods of time (see Japan since 1989, or the eurozone since 2008) is not so hard to explain under the theology of neoliberal economics. The road to heaven cannot possibly be travelled by the less than virtuous. Failure to achieve a full employment growth path is always, and everywhere, a clear indication of sinful behaviour. It is a self-inflicted wound, revealing a disgusting lack of discipline and devotion.

Stagnation, recessions and depressions are all the wages of sin – the sin of failing to assign property rights clearly, or the sin of failing to allow prices to be fully flexible, or the sin of allowing governments to spend money in ways (and in magnitudes) that private individuals would not voluntarily choose on their own. Not surprisingly, the IMF recipe for the repair of underperforming or imperiled economies almost always calls for gallons of deregulation, generous helpings of structural reform, and a slicing and dicing of government budgets so that God, the Almighty Invisible Hand, can do his good work on this fallen Earth.

While it is, of course, mere common sense that, for example, a drop in consumer demand for orange juice will lead to a decline in the price of oranges relative to, say, Tesla cars, it takes a true believer in neoliberal theology to expect that a decline in the relative price of oranges will lead to an equal and offsetting increase in the demand for Tesla cars. In addition, it takes even greater faith to believe that migrant workers in Florida orange groves will nearly instantaneously and almost costlessly move to California, to be retrained by billionaire entrepreneur Elon Musk in electrical vehicle production, such that there will be little or no reduction in employment or household income flows when the price of oranges actually falls.

The yawning gap between these canonical Bible stories of faith-based economics and our lived experience in real-world economies is so large, however, that it strains credulity, even among the most faithful. And so the high priests of neoliberal economics have admitted that God may not always be paying close attention to the workings of this world, at least in the marketplace. The Almighty Invisible Hand is sometimes engaged elsewhere – perhaps off creating some adjacent galaxy, or maybe just temporarily waylaid by an overdue manicure appointment, or otherwise overwhelmed with the many tasks that come with being the Deity. In that case, the God worshipped by the neoliberals needs nothing more than a few human helping hands.

These helping hands can only be found at central banks, where neoliberal economists from the right monasteries with the right names (MIT, Stanford, Harvard, Princeton, etc) find ample and well-rewarded employment as they toil away to perform that most holy act of relative price adjustment. The Archimedean lever these faithful servants wield to move the fallen and sinful economies of the world is unbelievably simple. When carefully prescribed and defended property rights and flexible prices in free markets fail, from time to time, to deliver full employment growth, real interest rates will surely do the trick.

Failure to achieve a full-employment growth path is always, and everywhere, a clear indication of sinful behaviour

Armed with the ability to influence real interest rates – or the price of borrowing money relative to the price of consumer goods and services – central banks have all they need to shepherd economies back on to full-employment growth paths. This magical relative price, the real interest rate, will elicit just enough investment activity by the business sector to match just the amount of saving that households would want to set aside at full-employment income levels. Voilà!

Inspect nearly any newspaper column or blog post by the ‘New Keynesian’ economist Paul Krugman, or any speech by European Central Bank President (and former Goldman Sachs employee) Mario Draghi, and you will be struck by the deep veneration these high priests of the Neoliberal Order hold for the power of real interest rates to produce what should otherwise be God-given outcomes. The only problem is that in reality, rather than in liturgy, manipulating the real interest rate has failed to elicit the expected investment response from the private sector.

Why has the visible hand of central bank clergy proven so inept? Since the free-market revolution spearheaded by Lady Thatcher and Honorary Knight Ronald Reagan, companies have been encouraged to be run solely for the benefit of their shareholders and, rather conveniently, for their shareholding CEOs and CFOs. Under the guise of maximizing shareholder value über alles, companies have been cutting the share of profits that they reinvest in tangible plant and equipment. Instead, their aim has been to extract the largest profits they can, and redistribute that income through share repurchases and special dividend payouts. By encouraging the maximization of free cash flow, and paying that cash out to shareholders and corporate management teams, the ‘natural’ engine of exponential growth in capitalist economies has, in other words, been gutted.

Rather than behaving like the captains of industry who previously guided technological innovation and pushed labour productivity ever higher with the proper reinvestment of profits, what we have is the modern equivalent of buccaneers on the high seas of commerce, with all the extracting, extorting and capturing of wealth that entails. Judging by the historically low levels of business investment spending relative to GDP in mature markets like Japan, Britain, the eurozone and the US, there may in fact be no level of real interest rates set by central banks that is low enough to stimulate sufficient private investment for anything resembling a full-employment growth path to be achieved.

In addition, a well-established canon of high-church neoliberal economics is that, due to the infinite grace offered by the Invisible Hand, all producers of goods and services will be paid nothing less than what their contribution to the value of these products is worth. If this article of neoliberal faith were true, we should observe that the real (that is, inflation-adjusted) wage paid to labour moves virtually in tandem with labour productivity (that is, the output produced per hour of labour effort). But such faith is frequently misplaced.

For example, in the US, real wages were decoupled from productivity in the mid- to late-1970s, a decade of profit squeeze and stagflation and increased momentum against organized labour. Globalization has further eroded this linkage, as transnational firms developed the capability to source labour from the most desperate corners of the world. If the Invisible Hand were ever virtuous in rewarding ‘each according to their contribution’, this may have been only a temporary indulgence or oversight, especially once firms discovered the joys and benefits of relocating production to countries where labour standards were considerably looser, or altogether absent.

Neoliberal economics is little more than a faith-based discipline meant to justify the extractive activities of the heads of this religious cult. Over the past three decades, the carnage wrought by this faith-based economics has become plain for all to see – all except the most faithful, who continue to blindly chant their TINA mantra – There is No Alternative. It is well past time to abandon this pseudo-religious charade and to replace the tinny TINA chant with AWIP – Another World is Possible; and indeed, we are here to build it.

Robert W Parenteau is a Chartered Financial Analyst, sole proprietor of MacroStrategy Edge and a research associate of the Levy Economics Institute of Bard College in New York.

The anti-gay gospel
The Arctic carve-up