Can eating meat and dairy products be sustainable? 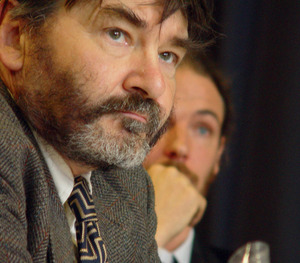 YES - Simon Fairlie is a founding editor of The Land magazine and author of Meat: A Benign Extravagance (Permanent Publications and Chelsea Green 2010). He keeps dairy cows and pigs at a community in Dorset, England.

Eating too much meat is unsustainable: industrial livestock farming is an inefficient way to produce food and has a heavy impact upon the environment.

But a proportion of the meat and dairy products we eat is a by-product of agricultural systems designed to produce grains and other vegetable staples – what I call ‘default meat’.

This includes: livestock fed on crop residues, food-processing waste and consumer food waste; ruminants foraging land unsuitable for cultivation, whose role, in an organic system, is to harvest nutrients and deposit them on arable land; ruminants grazing on leguminous grassland which is the fertility-enhancing part of an organic rotation; livestock fed on the surplus of grains which it is necessary to produce in most years to guarantee sufficient food for all in the worst year.

My estimate is that nearly half the meat and dairy currently produced in the world is default meat. The Canadian professor Vaclav Smil reckons it is considerably more than half.

In the community where I live, we feed about 25 people a day. Our two cows, grazing mostly on land unsuitable for cultivation, provide a large amount of our protein, fat and calories, plus manure for vegetables and potatoes. Though we are a vegetarian community, we keep pigs to eat the whey and food waste, and so keep rats away.

The pigs produce about 250 kilos of meat per year, or 10 kilos per person, which we sell locally. That fat and protein comes not from soy and palm oil imported from the tropics, but mostly from the grass that grows around us. That’s what I call sustainable. 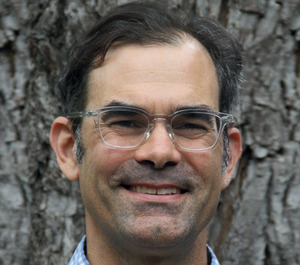 NO - James McWilliams is the author of several books about food and agriculture, including Just Food and The Modern Savage. His work has appeared in the New York Times, Harper’s, The New Yorker online, and The Paris Review. He writes ‘The Things We Eat’ column for Pacific Standard and teaches history at Texas State University.
Owen McWilliams

The non-industrial micro-food system that Simon describes is an impressively sustainable way to produce dairy and meat – for 25 people. How to scale that system to feed billions of humans in a rapidly globalizing market economy strikes me as the more relevant challenge.

Sustainably meeting that challenge – with humans consuming as few natural resources as possible to produce a healthy supply of food – will require ending all forms of animal domestication to clear space and recover the resources to sustain edible plants.

A mass transition to the more humane system that Simon describes would come with intractable problems.

Grass-fed cattle generate more (to the tune of 50 per cent) greenhouse gas than their industrially confined, soy/corn-fed counterparts; droughts – look at California – require the importation of silage that’s more water intensive than either corn or soy (alfalfa is California’s most water-intensive crop!); and the land required per pastured animal is often unsustainable – hundreds of acres per cow in parts of the US.

As long as we’re dreaming big, it makes more sense to replace livestock with a carefully managed agricultural model that produces plants for people to eat.

I’m not proposing scaling up from two cows, but scaling down from the system that already exists – reducing meat consumption by perhaps 50 per cent globally – so there is clearly ecological space to do that.

I agree it will be a challenge to persuade people to eat less meat, but not as much of a challenge as persuading them to eat none at all, as you advocate.

We’ve only been domesticating creatures for food for several thousand years. Who’s to say that this was not a monumental mistake – perhaps the biggest we’ve ever made as a species? - James

Methane is a more powerful greenhouse gas than carbon, but it disappears from the atmosphere quicker: carbon remains stable for much longer. This means that a relatively small reduction in methane emissions (the Intergovernmental Panel on Climate Change says ‘less than 30 per cent’, other sources estimate around 10 per cent) would stabilize the amount of methane in the atmosphere at current levels.

By contrast, it will take an over 80-per-cent reduction in carbon dioxide emissions to stabilize carbon in the atmosphere.

In theory then, halving livestock’s 40-per-cent share of methane emissions would stabilize methane in the atmosphere. However, eliminating cattle from grasslands would not be a reliable way of reducing methane because they may be replaced by bison, wildebeest, antelopes, termites, rotting grass or bush fires – all of which also produce methane.

It would be more reliable to eliminate the 30 per cent of anthropogenic methane emissions caused by fossil-fuel extraction, since this methane would then stay safely underground. Since we have to stop using fossil fuels anyway because they cause about 70 per cent of all greenhouse gas emissions, the methane caused by livestock is a secondary problem now, and even less of a problem if we reduce livestock levels by half.

You hinge your methane reduction forecast on the premise that humans should eat 50 per cent less meat, noting that this reduction, while difficult to achieve, is more realistic than forgoing meat altogether.

I disagree. Human history is replete with examples of societies abandoning once-habituated practices that eventually contradicted the ideals of civilized society. Slavery, laws of coverture, child labour, bear-baiting and eating Twinkies come to mind. Certain behaviours lend themselves to an all-or-nothing response better than others. Eating meat is one of those behaviours.

In the United States, we’ve seen a small reduction in meat consumption. But meat production has increased because of access to foreign – largely Asian – markets. One can identify non-industrial options – pastured beef – and argue that this pricier alternative has lowered meat consumption. But that’s only true for a privileged sliver of consumers. Globally, what determines consumption among mainstream consumers is price, and industrial producers always win there.

Point being: if we do not morally problematize the whole idea of domestic animal agriculture, cheap meat will always prevent the 50-per-cent reduction you advocate for.

Finally, to clarify: I’m not opposed to eating animals.

I’m opposed to eating domesticated animals. Humans have only been at agriculture for a tiny fraction of our history. We’ve only been domesticating creatures for food for several thousand years. Why do we think we’d ever get it right the first time around? Who’s to say that this was not a monumental mistake – perhaps the biggest we’ve ever made as a species?

These are questions that can push us fundamentally to rethink agriculture, rather than tinkering with percentages.

I agree that the surest way of limiting meat consumption is the traditional way, through moral strictures or ritual taboos.

However, there is no known culture or tribe that totally abstains from animal products – the reason being that it would be wasteful and foolish not to eat the default meat that is a byproduct of any agricultural system.

What we do find are cultures where some classes of people are allowed to eat meat and others aren’t, either all or part of the time. The classic example is India, where cows (whose primary purpose is to produce oxen for ploughing) are ‘sacred’, upper castes are vegetarian, and the beef, which is an inevitable byproduct, is reserved for outcasts, who deserve it because they do all the work.

The spread of a vegan ethic is one promising way of reducing meat consumption; but it doesn’t want to be universal because that would be wasteful and deleterious to organic husbandry.

I can foresee a time when people who live in cities, detached from the land, unaccustomed to demanding physical work, and used to consuming processed food, find it easy to buy into a vegan ethic.

I don’t see this happening in the countryside, where rearing livestock is integral to the production of crops and the management of land. We don’t just like properly reared meat; we honour it, because we know how much of the natural environment it encapsulates, and the human endeavour that goes into working the land.

We must draw distinctions. A critical one to draw is between the world as it now exists and the world as we want it to be.

In the world as it now exists, I’d say youand I generally agree that animals should only be consumed on the margins. What I mean is that we both seem to share an opposition to industrial animal agriculture and, possibly, even the smaller, pasture-based alternatives as they now operate.

We also appear to agree that there might be room for eating animal products under relatively rare circumstances. You point to the avoidance of waste for people living in the country. If animals were incorporated into a system to harvest their manure and benefit from their hoof-print action for the entirety of their lives, and then eaten at death, I wouldn’t disagree with this waste-driven rationale for animal consumption.

That, in addition to perhaps eating insects and roadkill, would foster a move away from animal agriculture as we know it, while avoiding the admittedly alienating message that comes with strict veganism.

And then there’s the world as we want it to be. My sense is that you prefer to look backwards (without romanticism) and revive what has worked in the past for rural communities.

I prefer to look ahead, at a rapidly urbanizing global population, and envision a technology-driven food system that accommodates this demographic. I suppose, like a lot of food debates, this differing perspective is more a reflection of personal temperament than being right or wrong, which no-one will ever be on a matter this complicated.

Reasons to be cheerful
Let’s stop ‘playing Indian’
Back