Chris Brazier looks back at what NI was covering three decades ago. 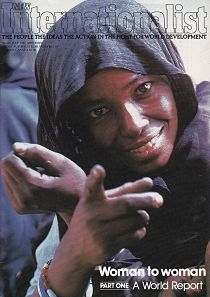 It is no coincidence that the July and August magazines in 1980 were about women and feminism respectively, or that the same was true for the July and August issues in 1985, or that we returned to the territory in July 1995. These dates coincided with major United Nations women’s conferences – there was Copenhagen in 1980, Nairobi in 1985 and Beijing in 1995.

It is hard to convey how important the early UN conferences felt at the time. For the first decade of the NI’s existence there was a general sense of optimism about what could be achieved through the UN system, and this would be regularly reflected in our pages. The UN system itself now has less confidence in the power of its conferences to bring about meaningful change and they are widely seen as little more than talking shops.

The most interesting of these five magazines to look back on now is that from July 1985, not so much for the formal report on the state of the world’s women that forms its backbone as for the brief excerpts from essays by 10 prominent female writers whom we had boldly commissioned (for our first ever book, Women: a world report). Thus we sent, for example, Germaine Greer to Cuba; Anita Desai to Norway; Marilyn French to India; Nawal el Saadawi to the UK, and Angela Davis to Egypt. Dip into this at nin.tl/NIjuly1985