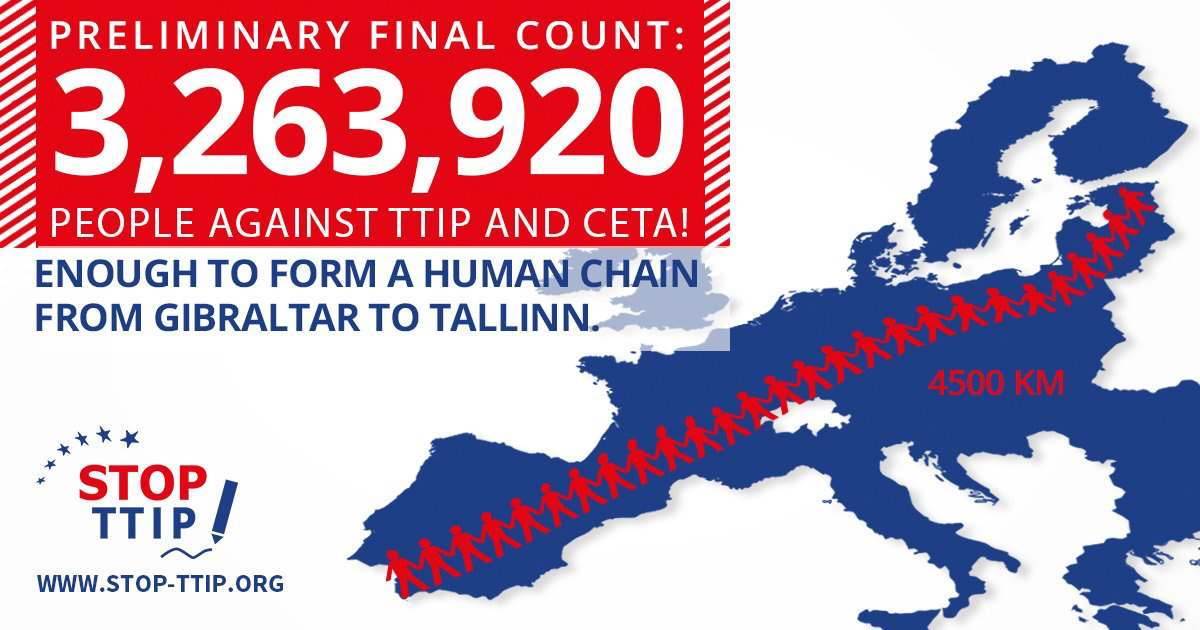 More than three million Europeans have sign a petition to stop the TTIP.
Photo: Stop TTIP

Last week, amidst much fanfare, the UN proudly announced that human rights are at the heart of its new 15-year sustainable development policy.

Three years in the making, the Sustainable Development Goals (known as the ‘SDGs’ or ‘Global Goals’) – which succeed the Millennium Development Goals – have been the site of many battles, often waged by Southern states and civil-society groups, to ensure human rights are at the heart of the Goals.

But the Goals’ laudable aim of seeking to ‘realize the human rights of all’ faces a severe threat from a new raft of secretly negotiated trade and investment deals. The deals, including the Transatlantic Trade and Investment Partnership (TTIP), risk undermining any gains from the Goals by undercutting international human rights law. Indeed, a 3-million signature petition against TTIP was handed in to the European Commission in London and Brussels today. War on Want Executive Director John Hilary explained that he thinks the petition ‘shows that the people of Europe are against these corporate-driven trade deals.’

One of the biggest fears for Southern countries outside these deals is that their exports to countries which sign up to the deals will fall. This effect is known as ‘trade diversion’, and studies on TTIP indicate huge losses for many countries, especially in West Africa and South Asia. As a German foundation notes: ‘If tariffs between the US and European Union [EU] fall, the relative barriers to market entry faced by developing countries become on average higher. It is exactly the poorer countries that suffer, some of them to a remarkable extent.’

TTIP seeks to create new ‘global standards’ for trade. But these ‘global’ standards will not be negotiated in the multilateral forum of the World Trade Organization, where Southern countries have a voice, albeit severely restricted. Rather, they are decided behind closed doors between the EU and the US. Southern countries will have to trade with the US and the EU on their terms, or not at all.

TTIP’s energy chapter will also have drastic implications for Southern countries. A key aim for powerful fossil fuel lobbies is to open up the export of high greenhouse gas-emitting tar sands oil and shale gas into Europe; the consequence will be a Europe locked into a high-carbon future, and for Southern countries disproportionately impacted by climate change, the decimation of lives and livelihoods.

But beyond this, there is a major threat through the highly controversial and increasingly used investor-state dispute settlement (ISDS) mechanism. ISDS enables corporations to sue states for lost future profits, and while increasingly opposed in Southern countries such as Indonesia, Brazil and South Africa, TTIP and its sister deals will consolidate the role of ISDS. This will fundamentally undermine the legal human rights obligations of states to their populations in favour of prioritizing the ‘rights’ of investors.

The sanctity of investor rights was made clear to Argentina after it was ordered to pay $405 million to water corporations. Its misdemeanour: protecting families by ensuring water remained affordable during a financial crisis, in line with the human right to water. After such a ruling, poor states locked into similar deals will think twice before taking action so people can afford water.

This has extra relevance to the Goals. One of the hardest-fought battles in developing the Goals was ensuring that the human right to water and sanitation was not side-lined, in spite of the efforts of the UK and US to do exactly that. For Northern countries, opposing social and economic rights and the application of human rights to corporations is standard practice; only last year, the richest countries of the world lined up to oppose an attempt to ensure corporations are subject to human rights.

But the right to water has become a key tool in combating the disastrous impact of water privatization in the Global South, and as water scarcity increases, so too will reliance on that right. As the EU Parliament acknowledged in a resolution this month, privatization in 1990s sub-Saharan Africa: ‘… hampered the achievement of Millennium Development Goals on both water and sanitation, as the focus of investors on cost recovery has … intensified inequalities in the provision of such services, at the expense of low-income households.’

The combination of privatization and ISDS will have toxic results for many human rights. As an unprecedented 10 UN Special Rapporteurs warned in a statement condemning the impact of trade and investment agreements on human rights: ‘The regulatory function of many States and their ability to legislate in the public interest have been put at risk.’

As UN independent expert Alfred de Zayas says, ISDS arbitrators: ‘must not compromise … the State’s fundamental obligation to ensure the human rights and well-being of all persons living under its jurisdiction. Agreements or arbitral decisions that violate international human rights law are null and void.’

Before the Global Goals are heralded as the means to ensuring human rights for all, civil-society groups must pay greater attention to this new regime of corporate-driven trade deals. To date, governments of the North have done everything in their power to elevate corporate interests at the expense of human rights. If we stand aside while these new trade deals are negotiated, civil-society organizations risk choosing the same path.

Mark Dearn is a trade campaigner at War on Want.