Art, oil and arrests in Paris

Today, hundreds protested against oil sponsorship at the Louvre and ten were arrested. Jess Worth was in the thick of the action. 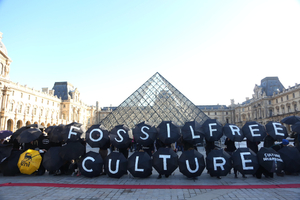 Art met protest in the Louvre today, as six performers ritualistically spilled ‘oil’ on the gleaming marble floor. As security guards, police and gun-toting soldiers looked on menacingly, the black-clad figures removed their shoes and socks, and walked ‘oily’ footprints in circles, to symbolise the polluting influence that two oil companies wield through their sponsorship of Paris’s most iconic museum.

Singing ‘Total and Eni, out of the Louvre, allez allez allez!’ they held black umbrellas aloft, mirroring a much larger action that was happening outside, simultaneously. Hundreds had gathered by the famous pyramid to spell out ‘FOSSIL FREE CULTURE’ with black umbrellas and urge the Louvre to end its relationships with these two destructive oil companies. They laid down a ‘red line’ in fabric, in solidarity with Indigenous and other communities’ struggles at the frontlines of climate change and oil extraction. The red line also linked the action to the planned ‘redlines’ protests around the world on December 12, which will emphasise that governments have yet again failed to do enough to stop climate change, and that social movements are the ones who hold the solutions.

The intervention inside went off peacefully and calmly. It ended as the performers processed, still singing, out of the Louvre. But at that point, things took a more sinister turn.

As many have reported, Paris is currently a police state in the wake of the horrific terrorist attacks. The French government has used its state of emergency to crack down on all protest, particularly around the climate talks, just when it is most needed.

So even though the six performers had done no damage, and are basically guilty only of creating art inside an art gallery, they were all arrested, plus four others who were documenting the event. Myself and my New Internationalist colleague Danny were also grabbed by the police as we exited and shoved into their cordon with the performers: we only escaped by flashing our press passes.

We have already witnessed this brutal crackdown on dissent a few times during our coverage of the Paris climate talks: most notably in Place de la Republique and at the Solutions 21 fair. The French government seems to particularly want to suppress anything that shows France in a less-than glowing light when it comes to the climate – like the deep institutional relationships its oil company, Total, has across French politics and culture.

But today also saw the birth of a new movement. Several groups have been working for the last few years to end fossil fuel sponsorship of arts and culture, but in Paris they all came together for the first time. Groups from France, Britain, Norway, Brazil, Canada and the US co-organized the Louvre action to launch an international collaboration to liberate museums and cultural institutions around the world from ties to fossil fuel companies.

This new and rapidly growing movement for a #FossilFreeCulture extends the wildly successful global divestment movement into the cultural sphere, calling on cultural institutions to cancel fossil fuel sponsorship contracts, divest financial holdings in the industry, and kick oil executives and climate deniers off their boards.

As Beka Economopoulos from New York-based art-activism collective Not An Alternative, one of the organizers of the intervention, put it: ‘It used to be acceptable for tobacco companies to sponsor cultural institutions. That’s no longer the case. We believe it’s a matter of time before the same is true of fossil fuel companies. When oil companies sponsor the Louvre, the Louvre likewise sponsors those companies. The museum gives these companies cultural capital and their “social license to operate.” On the occasion of the UN Climate Summit in Paris, we’re urging the Louvre to stop sponsoring climate chaos.’

Mel Evans, artist and author of ‘ArtWash: Big Oil and the Arts’, was one of those arrested during the inside intervention. She managed to contact me from her cell to say: ‘We made a beautiful performance to challenge Total’s sponsorship of the Louvre and now the police are protecting the interests of the oil companies. With the climate talks in Paris, it’s time for galleries to go fossil free”.

We are not sure how long they will be held in custody, but one thing is clear. The Fossil Free Culture movement has just made a dramatic entrance onto the international stage. 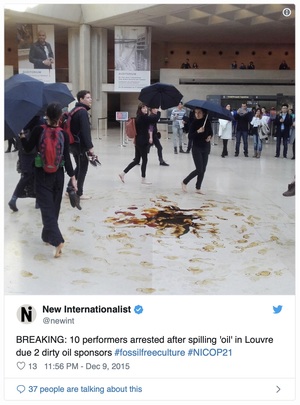