Which way after Paris Agreement?

La Via Campesina’s agro-ecology and food sovereignty offers one possible path toward climate justice, writes Marienna Pope-Weidemann in part one of this two part series. 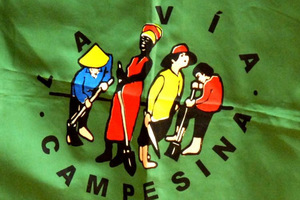 In 2007, a man named Keno was killed with two bullets to the chest at point blank range near the Iguagu National Park in Brazil. He was one of many farmers peacefully occupying a GMO research plant to protest the imposition of an industrial agricultural system that had no place for them. The men who murdered him were part of a private militia working for the Syngenta biotech corporation. They perpetrated what the courts would later describe as an attempted ‘massacre’ to, in Syngenta’s chilling words: ‘propagate the idea that every action results in a reaction.’

As any physicist (or farmer) can tell you, this is a basic law of the universe. But it also applies the actions of big agribusiness, whose land grabs, pollution and exploitation have reaped their own reactions from peasant farmers across the world. They are organizing, across communities, sectors and borders, and now they made themselves heard here in Paris.

‘They are destroying our homes, our livelihoods and poisoning the food in people’s mouths.’ Maria, another Brazilian farmer and spokesperson for La Via Campesina, had tears in her eyes as she finished telling me about the relentless destruction of indigenous and farming communities back home. But she held her microphone tight like a weapon. ‘This pollution is worse than death. If we have to give our lives to fight these transnationals, then that is what we should do.’

The essence of ‘the peasant’s way’ is agro-ecology and food sovereignty: simply put, protecting our farms and our farmers. It was La Via Campesina that first coined the term ‘food sovereignty’. For frontline communities in the South, this idea deeply rooted not only in an ecological culture, but also a deep consciousness of colonial history; an unwillingness forged by history, to rely on this government or that trade treaty to keep feeding you.

As one African famer – and mother – explained: ‘We were told our way of farming, natural farming, was wrong. We have to use the machines. Now, we are starving.’ She raised her fist. ‘Food security is not enough. It only talks about the food on the table. It doesn’t care who produces that food and how. Food sovereignty and agro-ecology is the only way.’

La Via Campesina means ‘the peasant’s way.’ Founded in 1993, this coalition of 150 organizations represents more than 200 million small-scale, indigenous and migrant farmers. Active in more than 70 countries, it campaigns to defend farmer’s rights and our food system.

For Via Campesina spokesperson Adam Payne, this means a constant struggle against industrial agriculture. Far from being a nation removed from the impact of a changing climate, he described how British farmers have been affected by hotter summers, wetter winters, droughts and floods.

‘The industrial food system’s failed us in every way,’ he said. ‘It’s brought more hunger, more obesity, land grabs forcing small farmers off the land, forcing us to compete in markets dominated by free trade agreements, and all while producing 50 per cent of global emissions.

In a report produced with GRAIN, winner of the 2011 Right Livelihood Award (the ‘alternative Nobel Prize’), La Via Campesina break food sovereignty down into five steps. First, taking care of the soil. They estimate that in just 50 years, restoring the practices of small-scale organic farmers could regenerate soil nutrients to pre-industrial levels. This would offset as much as 30 per cent of global Co2 emissions. Second, farming without the agro-toxic chemicals. Instead, traditional farming methods such as crop integration and diversification would improve soil fertility and protect biodiversity without threatening our health and our ecosystems.

The global food trade accounts for most of agriculture’s excess emissions. So, step three is the localization of production and consumption. While strengthening local economies, this would take a big bite out of global emissions. Industrial agriculture’s drive to maximize profit by exploiting cheap labour has super-charged the food market. Crops may be grown in Argentina to feed chickens in Chile which are exported all the way to China for processing and then shipped all the way back to the US for sale. These practices account for up to 6 per cent of all greenhouse emissions and serve no rational purpose. Organic, local produce would also mean more fresh food and fewer preservatives, so it’s healthier for us as well as the planet, which would cool and renew itself.

Next is a radical and vital demand: give the land back to the people who farm it. Because small-scale farms work more efficiently and more ecologically, and because it is their inalienable human right, La Via Campesina calls for a worldwide redistribution of land to rural family and indigenous farmers. Along with policies to support local markets, this could half global greenhouse emissions ‘within a few decades.’

The final step is one that must start now, in the wake of COP21, because every day we do not take it the restraints our farmers grow tighter and the precious resources left to us are squandered and destroyed. It is the rejection of false solutions, the free-market fixes championed by big agribusiness and the politicians whose interests they represent.

Indigenous and rural farming communities are on the frontline in this fight. Despite having lost 70 per cent their farmland to big agribusiness over the past 50 years or so, small-scale farmers still manage to grow 70 per cent of the world’s food. But for nearly five decades they have been under attack from big agribusiness. Water systems are polluted and land grabbed from beneath their feet as indigenous families are forced from their homes.

On Tuesday, La Via Campesina activists in Paris held a flash-action in defiance of the protest ban. They painted the entrance of Danone’s headquarters red to protest the lives lost by the corporation’s water privatization and land grabs in Asia, and the lives threatened by Danone’s promotion of so-called ‘climate smart agriculture’.

The following day, activists celebrated their Peasant Agriculture and Food Sovereignty day with a series of public events, welcoming speakers from across Europe, North America and the global South. The final forum, co-hosted with Confederation Paysanne, was flooded with hundreds of guests and had to spill out into the main space. The atmosphere was electric.

Farmers from across the world shared stories of exploitation and dispossession matched only by the solidarity they showed one another. A fisherman from South Africa re-counted their long fight against the criminalization of small-scale fisheries. For him, no law passed by a corrupt government in the interest of foreign corporations is legitimate. Yet even after an arduous and successful legal battle won over many years, his colleagues are still being arrested for trying to feed their families from their own ancestral waters.

‘We have decided we will be arrested again and again until they change the laws.’ His pledge was met with heartfelt applause. ‘When the government brings the army the women form a human chain around us and they protect us with their solidarity and their bodies.’

Listening to their stories, three things became very clear. First, a deep love for their way of life, their commitment to the fight for it and the great pride they took in this most essential of professions: feeding people. ‘It is noble,’ one said with dignity, ‘the first noble profession.’

Second, this is so much more than an environmental campaign or a section of the labour force organizing for its interests: it’s an independence movement, in the truest sense of the word. I was reminded of Mandela’s Freedom Charter. One of its most significant and indeed radical demands was that ‘land be given to all the landless people’. Really, it was the moral and economic heart of the anti-apartheid movement; one that was ultimately sacrificed by the African National Congress in exchange for a far less tangible and ultimately limited form of freedom for black South Africans. In exchange for national independence they sacrificed economic autonomy: a contradiction in terms, as South Africa – with the rest of the global South – would come to learn. But in this movement, the reclamation of the land takes on such enormous significance, and the environmental case for it is made with such clarity, it is hard to imagine it being sacrificed a second time.

Finally, we all heard loud and clear the necessity – and an embryonic culture of – a very deep internationalism. You could see it on people’s faces as they listened to a farmer from Mali speak: ‘[The agribusiness corporations] destroyed billions of hectares that are being occupied. They chase people from the villages. We are victims of mass evictions. And the governments are accomplices to the global corporations, they are protected even by police we pay for with our taxes… People are beaten up, peasants are in jail in their thousands, how can we resist this? There is a strong movement of resistance but at all times we will be too small. So we need to converge and fight together.’

As one fisherwoman put it: ‘We need more than solidarity. We must put our anchors deep.’ This kind of sentiment is more than a political strategy; more than the assertion that the more of us unite, the more we can win. It’s an old and intuitive recognition of the absolutely scientific interconnectedness of all life. And that’s a very strong foundation for the building of a better world, as well as an excellent reason to fight for it.