Praise, blame and all points in between? Your feedback published in the January/February 2016 magazine. 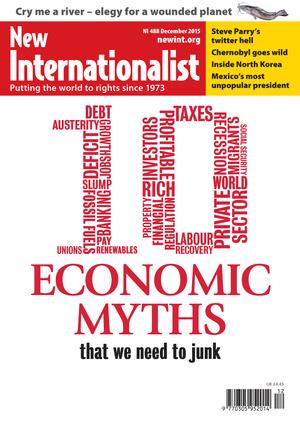 If North Korea is such a Stalinist police state (Country Profile, NI 488), how did Aidan Foster-Carter garner the information that formed the basis of his condemnation? He can’t have it both ways... either the DPRK is less secretive than he would have us believe or his comments are nothing more than ideological venom shorn of the ability to see this paradox.

See past the big buck 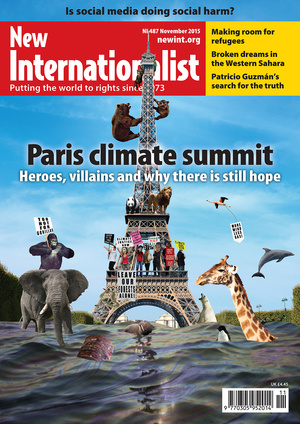 Re: ‘Forget Paris?’ (NI 487) We need to halt the baseline profiteering that is destroying the Earth, by instilling a duty of care into all agendas: government, corporate, small businesses, all. Making decision-makers, those who sign off projects, personally culpable and facing legal action for neglecting ecocide.

What is wrong with our so-called global leaders that they cannot see past the big buck, the need for capitalist growth? We have the sun for all the growing we’ll ever need. Everything else is stuck, in the realms of short-sighted and degrading greed. It’s now time to wake up and share the coffee! Time to put in place protections which ensure – no, demand – we leave a habitable Earth for future generations; or pay the consequences, quite literally. Nothing less is fair or equitable.

Congratulations on NI 487 and to all those who helped achieve the success of COP21. It was good to see politicians put away selfish interests and work to a common good. Only one legislature has come out against their leader’s commitments... the US Congress.

So, can I suggest that all the world civil-society NGOs, and particularly US-based ones, concentrate on the US and conversion of their climate-change deniers at US State level; and on the Presidential and Congressional elections of November 2016, to ensure that all candidates standing endorse the COP21 settlement.

May I also suggest that future COP meetings (after the 2016 COP22 in Marrakech already set in train) are at the UN in New York at the same time as the UN General Assembly each year rather than the current caravanserai. It would also put increasing pressure down the road on Wall Street financiers and the private sector as a whole to deliver on their commitments.

[On the ‘success’ of COP21, it may be worth reading our web exclusive piece ‘Paris deal: Epic fail on a planetary scale’ – Ed.]

No, Christine Elan-Cane (Letters, NI 487), ‘per’ is not an acceptable alternative non-gender-specific pronoun. To suggest so is 1984 thought-police stuff, dangerously manipulating (whoops, personipulating?) language in order to constrain thinking. It is also an existing word: please leave it alone. 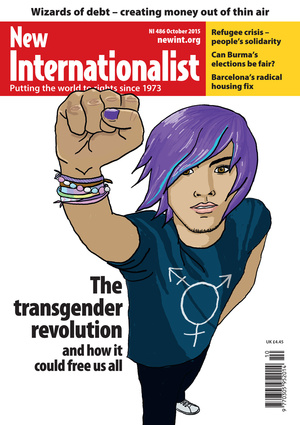 [Thanks for spotting this – Ed]

Our crowdfunded coverage of alternative voices and analysis at COP21 galvanized a large audience. A small selection of the comments from various items posted: 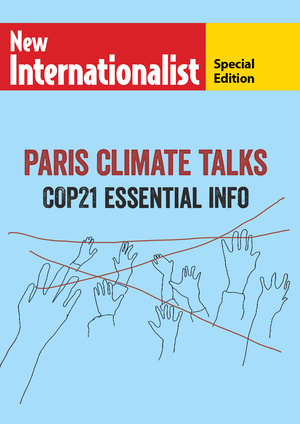 This agreement is a great escape for the big polluters, and a poisoned chalice for the poor.

Wow, this is so inspiring. People are ready for peace and to put an end to pollution.

Hard-hitting and humbling at the same time.

The vulnerable are bullied by bigger interests at every level in our societies and it’s important to spread the very articulate message this young woman conveyed [Dipti Bhatnagar of Friends of the Earth International, Mozambique], to people in your world and all must speak up NOW.

Wow! Exactly how I feel. Thank you for putting it into words that everyone can understand.

The only way humanity is going to live (and most of the rest of the species here) is if we find balance with the natural world… Planet before people and people before profit.

An accurate, digestible, thought-provoking assessment of where the world is just now. Time to speak up, time to organize, time to educate, time to challenge, time to act is now! Time is running out...

This is not only France. Freedom of speech no longer exists all around the world and I see these scenes repeated at any rally or protest in any country... corporations now have more power than governments and laws are changed to suit.

Amanda Brocket commenting on an item on police maltreatment of protesters.

The media should be covering more like this – incredibly powerful to hear their voices speaking from the heart despite the turmoil and trauma. Truly an example for us all.

A good moment to make a scene
Letter from Bangui: The guardian
Back