Praise, blame and all points in between? Your feedback published in the March 2016 magazine. 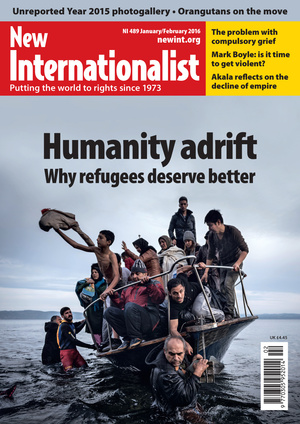 My heartfelt feedback on Humanity adrift (NI 489): I remember 1974. It was the year of my immigration from England to Australia. Sea sickness consumed me and all I could think of was getting to land, land that was still. It never crossed my mind that I would not make it. The ship was strong and if you did not feel sick it was a holiday on the ocean.

Today it is concerning. Refugees risk everything to get to land and deserve better. Many die at sea. My heart feels for humanity adrift on our planet’s ocean, where the rights of human beings are being painfully denied.

Re: Mark Boyle’s ‘The violence of nonviolent protest’, NI 489. Boyle does not quote one single instance to illustrate where violent action would have produced a better, more effective outcome. And I doubt that he can.

What kind of violent action does he have in mind? What is he going to do? Eat the heads of corporations? Or is he jealous of the apparent success ISIS are having at the moment? Does he imagine a campaign based on violent activism in today’s world and focused on ‘effective action’ can look very different from that of ISIS?

He is surely not thinking of violent revolution? I would have thought that those of the past few centuries are ample proof that they are not effective: an Emperor Napoleon within a few years of the French Revolution, a Stalin within a few days of the Russian Revolution, a Mao …. Need I go on?

The protest movements of the last half-century appear to be disparate and to have made little progress, not because they have not been sufficiently violent, but because we protest against symptoms, not causes. We are afraid to look for causes, because we fear that they are too difficult to shift and it would take too long. How would we substantially shift corporate business and politics away from greed, dishonesty and competition and towards co-operation, truthfulness and kindness?

I would like to disagree with Dinyar Godrej that the economy will recover better by the government spending more money on jobs for the public sector (NI 488). Gordon Brown did this by giving 500,000 non-jobs to the public sector and we collapsed, leaving no money for the coalition. They removed these and created 500,000 useful private-sector jobs and made a good start into saving the economy, which the next government is continuing.

How can public-sector jobs help the economy when they pay no taxes? Private-sector jobs like my pension are the only ones that pay taxes to pay the public sector.

I do oppose globalization, because it helps the rich to pay no taxes and have tax havens. Companies should all be based in the country and controlled by their government and elected MPs, hopefully removable if corrupt. TTIP proves how much excessive power companies already have.

[Public-sector workers pay taxes like anyone else. However, some argue that as they are paid by the government, these are not real taxes. – Ed]

In an otherwise impressive interview (And finally, NI 488), the director Ramin Bahrani asks – presumably rhetorically – ‘Who else but Scorsese could have made The Godfather?’

Revolution beyond the ballot box
Close your heart, open your heart
Back