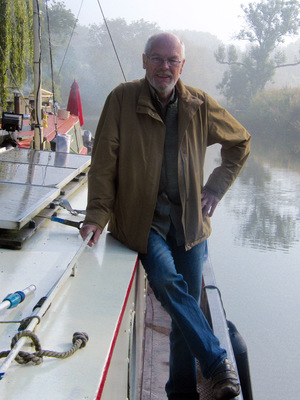 No-one was more surprised than David when he landed a job as a co-editor of New Internationalist in 1989.

He had been working for a homelessness charity in the East End of London and didn’t come from a journalism background. But we knew from a long, published piece about the killing (by police) of his close friend and fellow teacher, Blair Peach, that David could certainly turn a phrase and had a passion for justice.

Just the day before he died, David was musing on his ‘luck’ in having worked for such a ‘unique’ magazine, in a co-operative, in the company of such ‘creative’ people.

That modesty and readiness to praise others was typical of him. As regular readers of the magazine and website will know, David not only wrote like an angel, but was an inspired and imaginative thinker with a profound grasp of the political, economic and social realities of the world in which he lived. For over two decades he made a tremendous and creative contribution to the project that is New Internationalist.

Many of the issues he edited were ground-breaking, ahead of their time – he was one of the first to get a grasp on globalization (NI 296) and fair trade (NI 322); he was writing about tax justice (NI 416) long before it became sexy. With a background in economic history (he did his post-graduate studies on the mining industry in Chile) he was unafraid to tackle the big economic themes, but always in a way that breathed life, humanity and empathy into them. He wrote about commodities by physically travelling to the Windward Islands to look for ‘fair bananas’ and talking to the people who grew them (NI 317); he searched for trade justice in the global market in the company of Gregorio, a Peruvian coffee picker (NI 271). His self-written issues on this type of subject were distinctive and memorable.

Close readers of David’s writing will recall that he spent time as a banker in Uruguay in the early 1970s. This gave him an inside take on the nefarious absurdities of the global banking system which he went on to critique and demythologize in several articles and books. Uruguay also provided first-hand experience of what happens when a country falls victim to a military coup and ignited in him a lifelong interest in more democratic Latin American alternatives. (NI 251, NI 356). It was also where he met Anita, his former wife and mother of his daughter Ximena.

David lived his politics not only in his writing but in his talking – and he was a great talker. One colleague timed him in a meeting as he managed to keep going for 20 minutes, seemingly without needing to take breath. He was equally willing and articulate in his support of younger activists and their campaigns, and in his mentoring of younger, less-experienced editorial colleagues.

When he retired in 2009, it was to fulfil his dream to go and live in a converted Dutch barge on moorings just outside Bristol. Readers may remember the blogs he wrote for the New Internationalist website from his boat, and particularly the struggle he became involved in when the community was threatened with eviction. He played a key role in the legal battles that were to follow, while finding time to create an organic vegetable garden.

His connection with New Internationalist continued beyond his retirement, as a trustee, a contributor and occasional guest editor. Just last year he edited an issue on Banking (NI 482) and introduced many of us to the word ‘boondoggle’! He was also a major contributor on the 10 Economic Myths issue (NI 488).

One of the phrases that has echoed around the New Internationalist offices since we heard of his untimely death from cancer is that David ‘held us all together’. He was a generous enabler, a cradler of creativity; he was also a leader, but one who led in such a gentle, non-egoistic and un-domineering way that it barely showed, making him a true co-operator, and an easy colleague in a non-hierarchical collective.

Finally, mention must be made of David’s sense of humour, best captured in his delightful description, from his issue on bananas:

The bus slows to a halt. Suddenly a man in a stained vest, seated on a broomstick, hurtles out of the banana plants to one side of us, floats across the road in front of us and disappears into the plants on the other side. The ticket collector, who has killed the mosquito, descends from the bus and pushes back an overhead rail so that we can proceed. In due course we catch up with the man on the broomstick, punting rhythmically through the banana plants with two poles, flying along the cableway that was made to carry off their fruit, into spotlights of burning sunlight like Tinkerbell across a stage set for Peter Pan.

David, we will miss you.