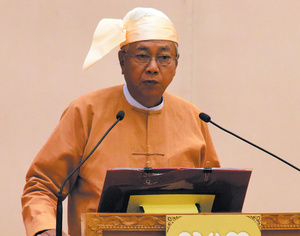 The 69-year-old former aide to National Democracy League (NDL) leader Aung San Suu Kyi may be the new president of Burma, but he is mainly a placeholder for Suu Kyi, who is barred from the presidency by a military-imposed constitutional clause because her sons hold British citizenship. With Suu Kyi announcing she will ‘be above the President’, and the military holding 25 per cent of the parliamentary seats, it is not clear whether the loyal Htin Kyaw will be able to put a personal stamp on the presidency, or even if he wants to. Suu Kyi is a force to be reckoned with, retaining huge popularity (the NDL won 80 per cent of the vote in last year’s elections) and an international reputation as one of the world’s longest-serving political prisoners.

Burma, with its lively media and civil society, is today a far cry from the brutal military dictatorship that held sway for decades. But the military is still a powerful check on any radical change, and impunity for men in uniform remains. The country’s 51 million people face many problems, including wars against ethnic minorities, endemic corruption, a vast opium economy and brutal levels of inequality. Little wonder that in his first speech as president the scholarly looking Kyaw begged for patience from his supporters. Those who can least afford patience, however, are the Rohingya Muslims, who are subjected to systemic violence. Even the saintly Aung San Suu Kyi is not overly sympathetic to their cause, given as she is to the occasional Islamophobic outburst.