Praise, blame and all points in between? Give us your feedback. 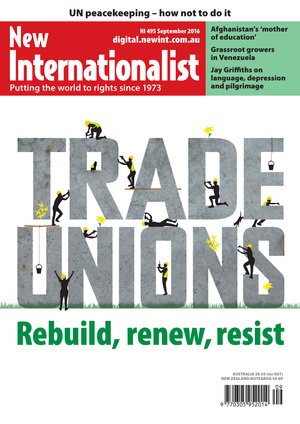 Louisa Waugh’s article (NI 495) critiquing UN peacekeeping operations correctly states that they need to be trained in ‘protecting women and children’ as per UN Security Council Resolution 1325. She also describes a ‘one-size-fits-all agenda of armed men’.

There is growing pressure at the UN for change through more women peacekeepers and this depends on the security institutions in troop-contributing countries such as India, Bangladesh, Pakistan and South Africa planning on a significant increase in women in their own military and police forces.

My NGO Security Women (securitywomen.org), launched this March at the UN Commission on the Status of Women and is providing a platform to research and advocate for changes that could lead to UN peacekeeping operations achieving their aims.

Re Digital titans (NI 494): Bruce Schneier worries about how governments and corporations can trace people’s comings and goings, and Robert Epstein about search engines’ influence on voters. Some voters probably do search the web for guidance, but they’re probably people whose ancestors’ votes were directed by clerics or tabloids or knitting magazines. Neither Google nor the Irish government would learn much about me from my mobile phone because I hardly make six calls a year and don’t keep it turned on all the time.

My worry about computer usage is different; it’s that it has replaced more efficient ways of collecting information. My Dept of Agriculture for some reason deals with me with me through a Herd Number, though my farming practice doesn’t involve keeping livestock, and posts directions on cattle management to me. At hospital checkups, my rheumatologist is more inclined to read computer printouts than to examine my actual joints.

The vote by a narrow margin to leave the European Union is a victory for rightwing xenophobes and a disaster for the struggle against austerity in Britain. It is a victory for racism and a mandate to strengthen Britain’s borders against migration. The millions who voted for Brexit did so because they believed that the worsening of living standards and public services are caused by immigration, not by austerity imposed by a Westminster government. Since Britain voted to leave it has been hit by a significant rise in incidents of racist harassment and violence.

The Brexit campaign was also dominated by assertions that the UK economy could benefit from access to the EU single market while opting out of the conditions on freedom of movement for workers. This is a reactionary myth and unacceptable to the EU.

It is generally understood that the EU single market is vital to living standards in the UK. The biggest adverse response is likely to be a fall in investment. Unless there were radically different economic policies where the state directs most investment, which is extremely unlikely, then any economy dependent on mainly private investment will suffer outside the single market.

Now that the Tory Party has done its blood-letting, its Brexit negotiations will be forced to face the real world.

[Steve Parry writes a humour column for us. We have published a number of Brexit-related pieces on our website.]

Proud to preach
The sum of our disappointments
Back