Name
Donald Trump
Job
President of the United States
Reputation
An ego with money
Humour
Mostly based on the mocking and belittling of lesser mortals.
Cunning
Now in power, Trump is playing it low key and conciliatory – but his appointment of the sinister Steve Bannon (who ran Trump’s election campaign) as his ‘chief strategist’ complete with white nationalist credentials, and a reputation for using the ‘big lie’ to get his way, speaks of trouble ahead for tolerance and democratic rights.
Sources
CNN; Wikipedia; Investipedia; vox.com; abcnews.com; theguardian.com; The Nation; npr.com; theirishtimes.com 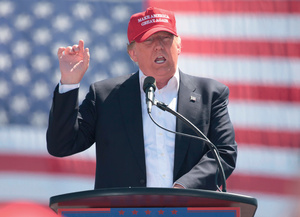 A year ago, Donald Trump was a bad joke. Now, he is president of the most powerful country on earth. Did we miss something?

It is difficult to know what, if anything, Trump stands for, let alone what he might do. An egotistical buffoon, he displays a lowest-commondenominator cunning and a stunning amorality. He seems willing to say anything to move him towards his goal of amassing power and prestige.

Trump’s victory came in an election with a relatively low turnout by uninspired voters. Constituents in places that had supported Barack Obama in 2012 (such as Wayne County, Michigan and Milwaukee) stayed home, costing the Democrats key states. Though he did worse than previous Republicans (even some who lost), Trump did well enough to win against Hillary Clinton. His vote tally (60.5 million) was less than that achieved by Mitt Romney (another billionaire, who got 60.9 million) in a losing cause in 2012. But whether you blame a Democratic candidate who stood for very little, FBI leaks or the bizarre US electoral college voting system, we are still left with the fact that 60.5 million people chose to vote for a racist, sexist, homophobic candidate, intolerant of dissent.

Despite coming across as an unpleasant excuse for a human being, Trump was able to wear the robes of ‘change’. Hard-core free-enterprise Republicans voted for him even though he rails against trade treaties and the impact of globalization. Fundamentalist Christians lined up behind him despite his being a sexual predator who has played it fast and loose throughout his personal business history. US patriots favoured him even though he thinks the US is militarily overextended.

Trump has always traded on the notion that he is rich and successful and that, as president, he will make the whole country this way. Much of his initial wealth and life opportunity came from his father, a real-estate developer of German descent in New York City. Despite this silver spoon, Trump’s business career (also primarily in real estate) has been a rocky one, involving bankruptcy and controversial tax write-offs. There is little agreement over his actual ‘worth’, with estimates varying from $3.9 to $10 billion. He takes great pride in having gamed the tax system and spent many years paying no tax at all. He boasts that his understanding of tax will allow him to close loopholes, although it is not clear why he would do so.

The thing that seemed to appeal most to voters (or at least the minority who voted for him) is ‘at least he tells the truth’. By this they apparently mean that he is definitive to the point of a crude bluntness in his pronouncements. Whether or not they are true is less important than that they echo paranoia-laced conspiracy views of the world based on stereotypes and scapegoating that run rampant through Middle America. And Trump has always made a good living out of being theatrical and abrasive, which plays well in a celebrity-obsessed culture.

While it is clear that he will be a disaster for the world (his denial of human-based climate change alone ensures that) what Trump will actually do is less clear. His tendency towards impetuous personal pique is not a good fit with sane international relations, let alone for someone who has his finger on the nuclear trigger. His promises of mass deportations, tearing up trade treaties, banning Muslims and building the famous Mexican wall seem expensive and counter-productive to corporate profitability. Whether or not he intends to carry out the things he said for effect during the election campaign is a question which hangs in the air.