A word with Naseema Assada 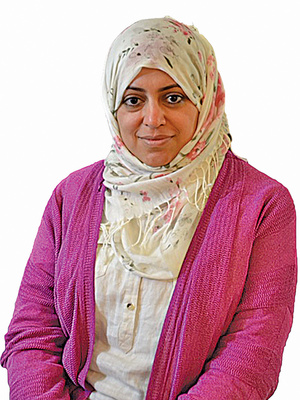 I became involved in human rights activism in 2009 and I still am; but now I mainly focus on women’s rights. I participate in campaigns alongside other women on issues that affect us. We organize via a WhatsApp group.

You are a fierce campaigner against the ban on women driving. The movement has gathered pace over recent years. What will it take for the law to be changed?

I’ve driven several times. I went to register for a driving licence but was refused because I’m a woman, so I tried to sue the Ministry of the Interior. It was strategic: to change the law and achieve our rights, I needed to make a civil case and encourage other women to do the same. I had a good case but the judge refused to take it on. He said that no-one from the Ministry would have acknowledged the complaint. The Ministry is more powerful than the law, and the King is more powerful than the Ministry. He changes laws without warning and only when it suits him.

You were disqualified from the Saudi municipal elections in December 2015. But has the inclusion of other women in politics since then made a difference?

No, even men don’t have any power in municipal roles. But it was the first stage in women becoming involved in politics. Before the elections, I held workshops for women to explain why it was important for them to use their vote, or even just to register to vote – to say ‘I’m here’. Many women were prevented from registering because they needed permission from their guardians. Four of us – all of whom work for women’s rights – were disqualified without reason in 2015.

How has male guardianship affected your life?

I have a supportive husband who doesn’t control me, but other women suffer because of this. My daughter is in college 400 kilometres away in Saudi’s capital city, Riyadh, and requires guardianship to let her out of campus. The university asks me to give permission before they will allow her to travel to my home. Yes, they [now] accept permission from me, after four years! Before that, my husband had to go to court just so I could collect my daughter and travel home with her.

Your current campaign is called ‘I am my own guardian’…

We are encouraging women to think about how male guardianship is affecting their lives. I have a wristband with the words ‘I am my own guardian’ written in Arabic and English. When women see it, they come up and ask me questions. No governmental organizations in Saudi Arabia promote women’s rights, so we have to do it ourselves. Twitter is our umbrella to discuss ideas with each other. Three months ago, we started the hashtag #Iammyownguardian. Many women are now asking for an end to the guardianship system. We have sent a petition [the first of its kind] to the government to end male guardianship, and we use the media. Men support us. My brother wears the bracelet because he says it’s not just about women, it’s about all of us.

What has the reaction in Saudi society been to your activism?

Some people think that we are troublemakers as activists. It’s not because we like trouble, it’s because we want to remove trouble. Certain issues may not affect us personally, but we think about all women.

What do you think will happen this year?

The worsening economic situation means that there may be more pressure on the government to reform and make concessions to please the people. On the other hand, the economy could be an excuse for the government to become stricter. Politicians are not thinking about women at this time: they are thinking about war. Either way, we cannot stop. Things may not happen for my generation, but my daughter’s generation will win their rights.

Lydia Noon is a freelance journalist based in Britain.

Only Planet - First contact
Mixed Media: the best of 2016