The author of The Reluctant Fundamentalist talks to Graeme Green about extremism, the refugee crisis and feeling at home in the past. 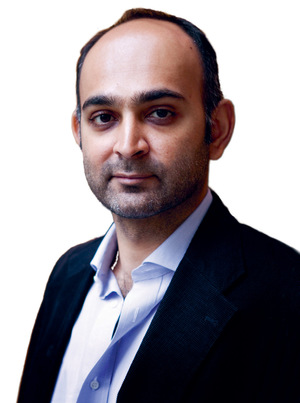 In your new novel, Exit West, you write: ‘Geography is destiny’...

In geopolitical terms, geography can be a matter of life and death. When relations between people start to break down, when suspicion and xenophobia grow, and when schisms start manifesting themselves, the exact location where you are from can take on deadly forms.

Very often, we experience political events in a particular way because of who we are. People aren’t necessarily bound by where they come from, but it has a very real impact.

I take a position that it’s not as simple as being ‘from Britain’ or being ‘from Pakistan’. I don’t think that because someone is British or Pakistani or Muslim or male or gay or whatever that that decides everything. But we have to acknowledge that there are some forces at work.

Exit West looks at the refugee crisis. Why did you want to tackle this issue?

It’s a central issue of our time. It has always been a central issue of all time. The movement of people, of migrants and refugees, has always been part of the human condition. What is perhaps different is the relatively recent notion about the boundaries of nation-states. In some ways, the borders of Pakistan or Britain or Germany or America are unnatural. The current crisis isn’t about people being refugees and migrants. The crisis is that we think of such movements of people as a crisis.

I think inevitably humanity is going to come to a place where the notion that people can move and choose where they live will be thought of as a right that is as fundamental as the right to speak as we want or worship as we want.

How do you think future generations will judge this moment in world history?

With a certain degree of horror at the way we have treated our fellow human beings. It will seem as abhorrent to us as having slaves looks to us now.

Opposition to migration is a fundamentally immoral position. We have built societies on the notion of democracy and individual rights and liberty. We are seeing our liberal democratic systems shudder under the weight of this hypocrisy: if we are unprepared to extend liberal democratic values beyond the boundaries of the nation-state, we are hypocrites. We can’t say that everyone is born equal and then treat as sub-human the people who come to our shores in desperate circumstances.

What good can the arts do?

Books can create an empathy for people who are different from ourselves. They broaden our sense of compassion.

One thing that art and literature can do is imagine futures for us. At the moment, we are seeing a failure of imagination. No-one is articulating plausible desirable futures for us as human beings. What we are hearing articulated is dystopias – that life will be terrible in the future – or vehemently nostalgic, divisive, chauvinistic visions from the likes of Donald Trump or the leaders of ISIS.

Ten years on, why do you think The Reluctant Fundamentalist had such an impact?

There was a lot of space in that book for readers to bring their own stereotypes and fears into play. I think it touched on something in our daily lives. We are often navigating the sense that we’re feeling afraid of someone without being sure if there’s a reason why. People responded to that.

Where do you feel most at home?

I don’t know if I feel particularly at home anywhere these days. It’s a strange situation. I was in San Francisco recently and spent time in the Bay Area where my father is a university professor. There was a sense of home there. I was meeting old friends and feeling nostalgic about spending time in California, but then I came to London, where I got married and my first daughter was born: the important things in my life. Lahore is where I live now. I move between London, America and Lahore. All three are my homes but none of them are entirely my home.

We often think about where we feel at home, but I have started thinking differently: when do you feel at home? As I get older, I feel less and less at home in the present moment. More and more, the past is where I feel most at home, which is, of course, gone. I’m always a little bit not-at-home in the present.

Exit West by Mohsin Hamid is out now, published by Hamish Hamilton. mohsinhamid.com

Graeme Green is a journalist and photographer for Wanderlust, The Guardian, The Sunday Times, The Sunday Telegraph and others. Twitter: @greengraeme

Only Planet - The Market
Mixed Media: Films
Back