A lack of legal protection combined with toxic prejudice leaves migrant workers in Lebanon between a rock and a hard place. But the struggle for rights is under way and, as Fiona Broom reports, it’s coming from the ground up. 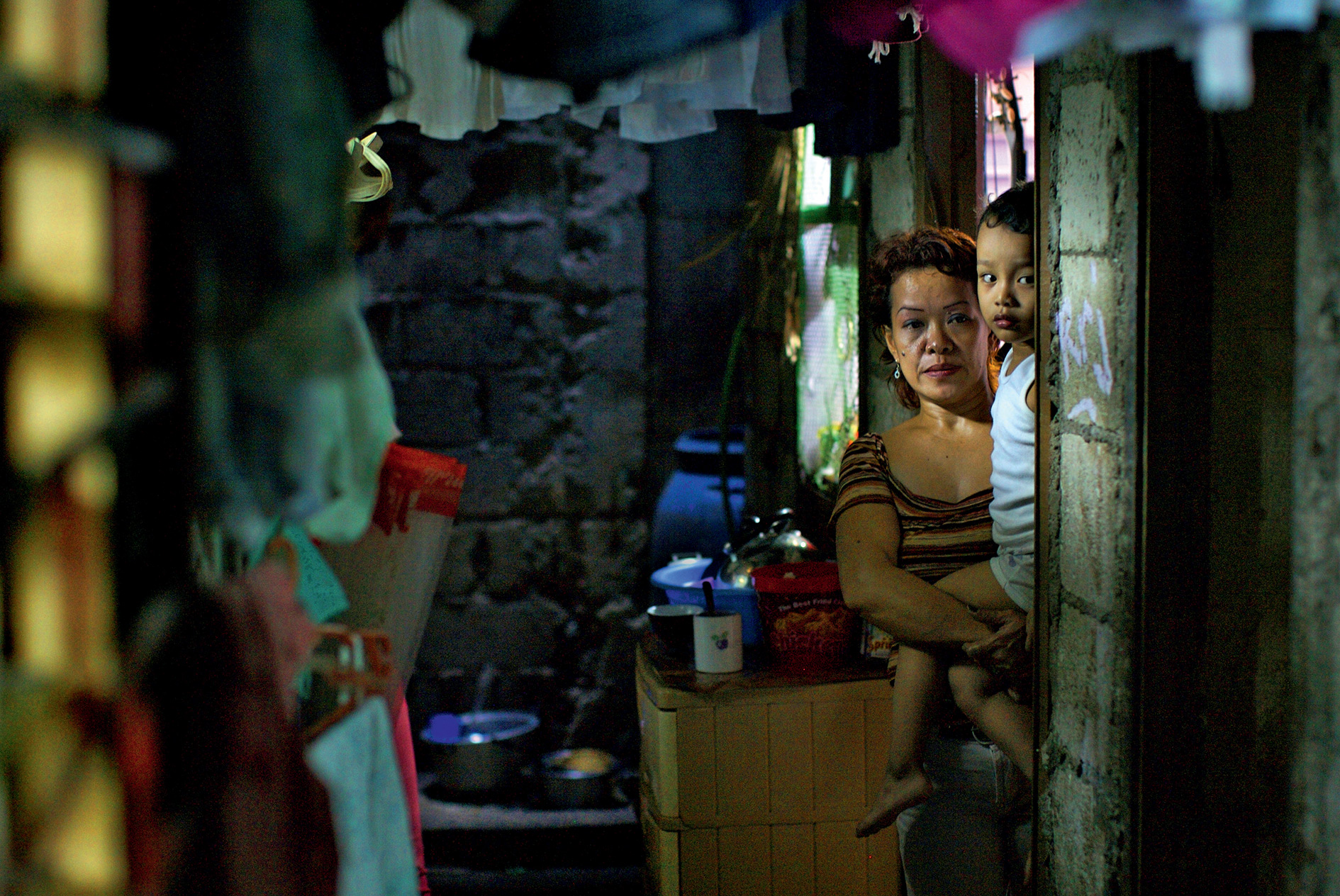 Maria Soccorro dela Cruz (pictured with her grandson), was sexually and verbally abused while a domestic worker in Lebanon and Syria to support her family in Manila.
Photo: Robin Hammond / Panos

On a steamy Sunday in Beirut, the sounds of Afropop waft into the sleepy streets that are all but deserted on the day set aside for family. The music comes from an atypical family gathering – the revellers are neither Lebanese nor related. This is a party for the migrant domestic workers and labourers that prop up Lebanon’s households and economy.

It takes place in the Migrant Community Centre established by the Anti-Racism Movement (ARM) to provide workers with a space they can call their own. Migrant workers are employed here under the kafala, or sponsorship, system, which affords them little personal autonomy. Kafala – implemented across the Middle East – binds employees to their employers. Workers cannot leave the country or change jobs without their sponsor’s permission. In most cases they are stripped of their passports. A 2016 study of 1,200 employers paints a shocking picture – almost all rejected workers’ rights to a private life, arguing migrants are only in the country to serve; one in five employers admitted locking workers in the home, with many saying they knew the practice was illegal, but did it anyway; 40 per cent of employers withheld wages; and 30 to 50 per cent did not provide a private bedroom, with some workers forced to sleep on the floors of kitchens or on balconies. One of the reasons for this mistreatment is stated bluntly by Maya Ammar, spokesperson for the rights group Kafa (Enough) Violence and Exploitation: ‘Racism is a problem in Lebanon.’

The International Labour Organization says there are more than 250,000 female migrant domestic workers in Lebanon. A smaller amount of men work as labourers or shop hands. They largely come from the Philippines, Northern Africa and South Asia – attempting to escape backgrounds of poverty and limited employment opportunities. Migrant workers are not included in Lebanon’s labour laws and thus do not have basic protections, such as a minimum wage level or rest days.

At its worst, the kafala system enables appalling abuse without legal recourse. The stories of women locked in sexually abusive households often only come to light after a desperate escape over an apartment balcony. Such bids for freedom can also end in death. Activists say it’s likely the many women’s deaths labelled as suicide may, in fact, be murders. In 2008, Human Rights Watch said one migrant worker died per week in Lebanon; in May this year, IRIN News reported that government data showed this rate had now doubled. According to Ramy Shukr, general co-ordinator of ARM’s community centres, as the number of workers in the country continues to increase, so to do instances of abuse.

Those lucky enough to have supportive employers who provide a day off don’t always have somewhere to go. ‘We started the centre because we’re not welcome everywhere,’ the centre’s assistant co-ordinator Rahel Abebe says. The Beirut centre now has almost 500 members and ARM has opened new branches in north and south Lebanon.

Abebe came to Lebanon from Ethiopia 10 years ago. She was able to leave domestic work and now runs an Ethiopian catering business, but she isn’t free of kafala – to live in the country Abebe still requires a sponsor. She says groups of migrant workers on outings are often racially abused. A comfortable space where migrants can meet, and celebrate with their music and culture, is a rare luxury. ‘We’re a really diverse group, but we’re like a family and everybody loves each other,’ Abebe says.

Just as importantly, the centre is a place to rally for migrant workers’ rights. Rather than adopting the traditional top-down approach, worker support-groups such as ARM and Kafa encourage those affected by kafala to join the battle. This led to the creation of a domestic migrant workers’ union chapter under the umbrella of the National Federation of Workers’ Unions in Lebanon. In late 2014 a request was made to the Labour Ministry to form the union, but this was rejected, and it is yet to be officially recognized. That has not stopped its members, though, who continue their fight for legal protection, despite arrests of activists and, in some cases, deportation.

In 2014 the Justice Ministry told sponsors they should ensure workers in their employ did not marry or have romantic relationships. Ammar says Kafa and other activists forced the government to revoke the directive, but migrants’ families are still under threat. ‘Practically, on the ground, they’re not giving residency to the children of migrant workers,’ Ammar says. This means mothers may have no choice but to leave with their children, often splitting up families as fathers stay behind to continue working. ‘Having a child in Lebanon should not be treated like a crime, and the people who come to take care of Lebanese citizens for years should be allowed to have families as well,’ says Lama Fakih, deputy Middle East director at Human Rights Watch.

Those who remain, in many cases because they cannot afford to go home or are denied the necessary paperwork from their sponsors to do so, have to live in the shadows. In 2014 the Insan Association published Shattered Dreams: Children of Migrants in Lebanon. The report found children of migrants, including Syrian refugees, were highly vulnerable to exploitation – half of the children of documented migrants and 23 per cent of children of undocumented migrants were engaged in child labour. Only about 50 per cent of migrant children attended school.

These are the legal and ideological battles that migrant workers and their Lebanese advocates are facing. But the tide may be turning, albeit slowly. Public awareness of workers’ rights is improving, according to Shukr. ‘In the past 10 years there has been an increase in public discussion about the rights of workers, whereas before it wouldn’t be talked about,’ he says. ‘Cases of abuse and suicide are getting more attention from the media. The government is still denying [there is a problem], of course, but they’re forced to have meetings and they get asked questions. With more awareness we can highlight the abuse and how it’s produced and maintained. And we encourage migrant workers to advocate for themselves and build awareness in their communities.’

Ammar says Kafa also focuses on building women’s capacity to claim their legal rights for themselves. Annual marches on International Workers’ Day and the founding of the migrant workers’ union were turning points for the movement, she feels. ‘I am optimistic because the women themselves are mobilizing and the community is changing,’ Ammar says. ‘There are signs of change, but I don’t think things will improve in the short term. Behavioural change will take more time. But we’re keeping the conversation going.’

In the meantime, Abebe vows she and others constrained by the sponsorship system are determined to continue their struggle. ‘We won’t stop fighting against kafala.’

Fiona Broom is a freelance journalist and environmental management student.

Shopping for their lives
Get up, stand up!