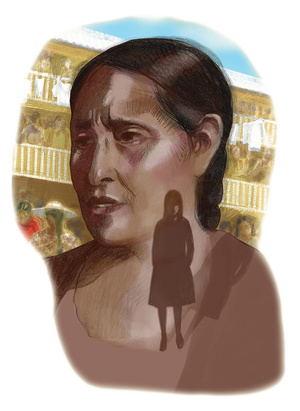 The patio of San Sebastian women’s prison looks for all the world like a food court. The place is tightly packed with families sitting at plastic tables as if to have a picnic. Women hawk bottles of soft drinks and empanadas from little stands: in Bolivia, prisoners need a way of making ends meet, because nothing – not even their cell – is free.

My friend Angie guides me through the throng to Florencia. Greeting each other warmly in Quechua, Angie delivers potatoes and vegetables bought fresh from the market, which she stows away on the floor beneath the row of grimy little electric hobs that lines one wall. Florencia is a slim, petite woman in a traditional pollera skirt. She has been sentenced to 30 years in prison for murder.

Florencia is a slim, petite woman in a traditional pollera skirt. She has been sentenced to 30 years in prison for murder

Florencia and her companion Ana are from a remote pastoral community near Capinota, where they used to make a living pasturing goats. In June 2013, a 13-year-old girl was raped and murdered, her body dumped in an irrigation channel. The following night, Florencia and Ana were dragged from their homes by a furious mob: they and their husbands were the prime suspects. Florencia was separated from her husband, but that didn’t matter to the mob.

For hours, the women were beaten. Men put sacks over their heads and held knives to their throats, threatening: ‘We’ll do to you what was done to the girl.’ The mob lit bonfires and threatened to burn them alive. To save herself from the flames, Florencia confessed. Hours later, the police arrived and took the women into custody.

Many people have little faith in the formal justice system; Bolivia was ranked 113 out of 176 in Transparency International’s 2016 corruption perception index. Moreover, for people in remote areas who only speak indigenous languages, formal justice can be hard to access. There are legal provisions for community justice in certain circumstances in Bolivia, but lynching is illegal. Nonetheless, cases of violent and gruesome mob killings carried out on the basis of little or no evidence crop up with alarming frequency. It is common to see life-size dolls hung from lamp posts as a warning to would-be criminals, sometimes accompanied by slogans like ‘Thief caught, thief lynched’.

The women and their husbands spent nearly three years in prison awaiting their fate until, in April 2016, the sentence was handed down. The court concluded that the husbands had been having a relationship with the victim. This had caused Florencia and her husband to split up was the reasoning, and the pair went on to kill the girl. Florencia and her husband were sentenced to 30 years in prison for murder, and Ana and her husband to 15 years for being accessories. The women were the last to understand what was to become of them because they only speak Quechua.

According to the court documents, Florencia’s mother said Florencia went out at around nine on the night of the crime and didn’t return until the next day, leaving her with no alibi. However, Florencia and Ana say there was no official translator present to dispute this detail. Although samples of hair were found on the victim’s fingers, they were never taken for DNA analysis. The evidence available proved how the girl died, but there was no proof that Florencia, Ana and their husbands were the ones who committed the murder.

The defence also points out that forensic evidence shows the victim had had sex with others, including her teenage uncle, before the murder – but at the investigators’ discretion, any link between the victim’s uncle and sexual abuse suffered by the victim had been left out of the investigation.

Florencia and Ana have always protested their innocence. Angie met them while working on a project about prison conditions. Horrified by their story, she has helped them launch an appeal. Following her repeated requests, the public prosecutors in Capinota admitted that they had lost the investigation notebooks and other documents pertaining to the case.

Our visit is brief. There are no long chats; it feels like there isn’t much to say. Angie offers them a few words of support in Quechua, introduces me and leaves the food she has brought. Then we head back into the outside world.

Meanwhile, with the original case documents lost, there is no date for an appeal hearing – and the victim’s killers could still be at large.