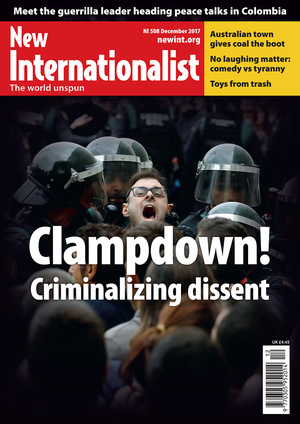 The destruction of the coal-fired power stations in Port Augusta (as reported in NI 508), may well bring good things to that town: cleaner air and jobs in the solar industry. But you fail to mention that we South Australians pay the highest price for our electric power in the world. The Federal Government is heavily subsidizing ‘renewable’ power production (with taxpayer money, of course) to fulfil its aim to source 23.5 per cent of our power from such sources by 2020. Since Australia contributes about 1.3 per cent of the world’s atmospheric CO2 emissions [actually 1.8 per cent for just 0.3 per cent of the world’s population – ed], reducing it to 1.2 per cent will have a negligible effect on the greenhouse effect.

If the provision of electric power to homes is a human right, the building of power stations in India fuelled with Adani coal from Australia could well be seen as strongly positive. Emotive phrases like ‘carbon bomb’, and the assertion that that bomb will increase the dreaded greenhouse gases by 20 per cent, causing a temperature increase of 5-6°C, is unwarranted hyperbole. Time will tell.

Bad Education (NI 505) highlighted how education is being appropriated by the interests of those who seek to reproduce neoliberal, unequal systems and relationships of power. This trend is getting worse, as large corporate organizations such as Pearson and Bridge become increasingly dominant in both the governance and delivery of education. This is an issue not just at primary and secondary levels: we can also see the impact on further and higher education.

As a group of teachers, researchers and activists in further and higher education, we have seen the damage that can be done by this model in our own workplaces. However, we have also seen the possibilities of challenging it by offering truly emancipatory and critical educational opportunities.

Universities and even progressive colleges are increasingly subject to the neoliberal disciplinary and financial structures that insist students pay ever-increasing fees, and yet lecturers are under pressure to spend less time actually teaching students. Teaching is often carried out by poverty-stricken, hourly paid lecturers, and lecturers are under pressure to publish in journals, often at the cost of their own wellbeing and academic integrity.

In this context, we at the RED Learning Co-operative (Research, Education and Development for Social Change), see the opportunity to re-create a space for truly transformative and emancipatory learning, based on the pedagogy of Freire and on our belief in the engaged and embedded knowledge of activists and change-makers. We value educational achievement for its contribution to a broader social good, which releases us from the need to hit targets based on ‘employability’ and other such blunt metrics. We are joining with others in a working group to take forward these ideas and create a Co-operative University.

As long as there are those who think differently, there will be real knowledge.

Your Country Profile is always immediately informative and a great way to get a snapshot of a country, but times are such that I think an additional inclusion in the ‘At a glance’ and ‘Star ratings’ should be ‘Climate Change’. The baseline could be 1970, when NI was created, and when the impacts of climate change hadn’t begun to bite.

The rebranding of a rotter
The weighted scales of justice
Back