An end to Jakarta's water woes? 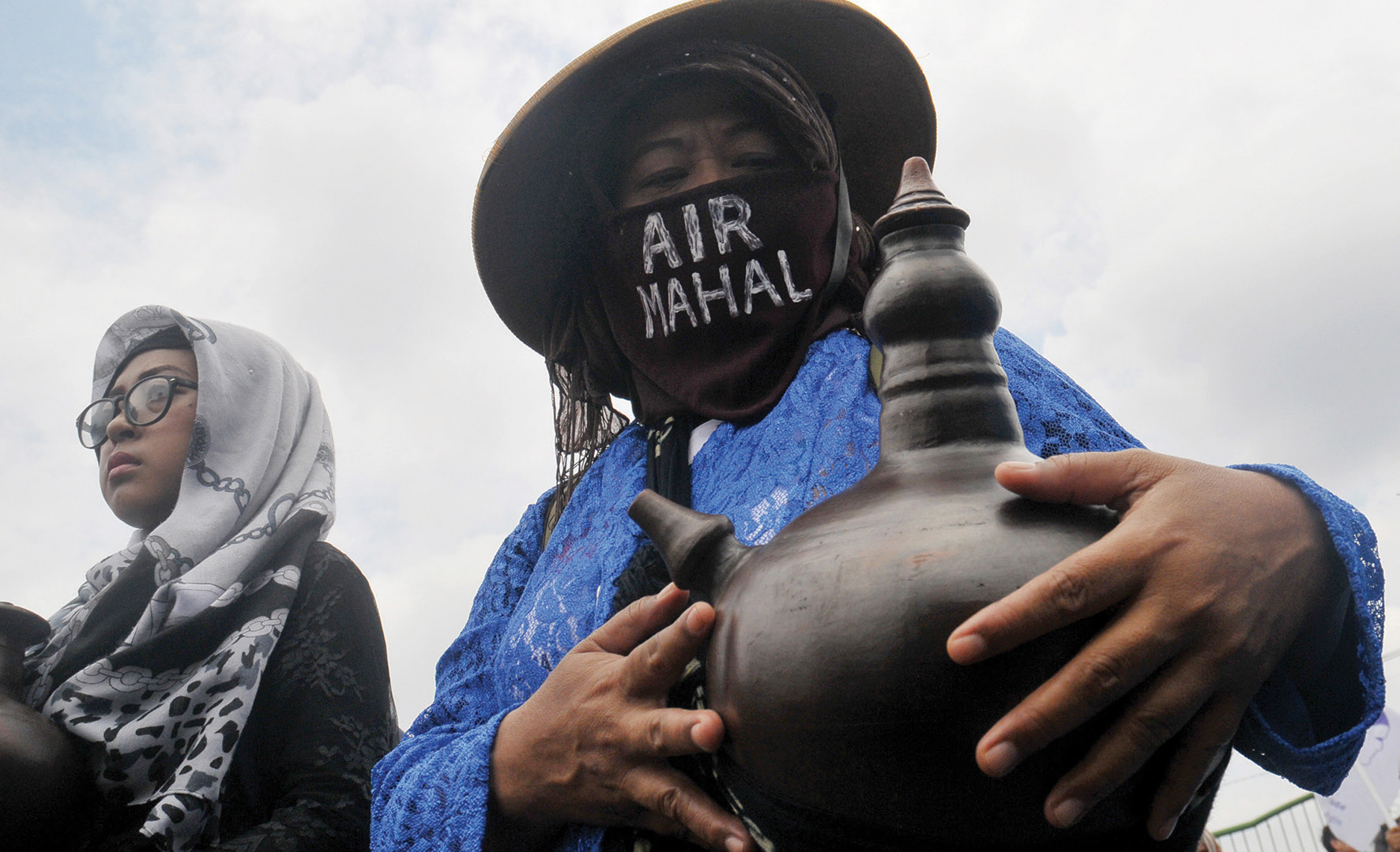 Displaying a traditional water jug, these women join a rally against corporate control of the water supply in Jakarta on International Water Day.
Photo: Dasril Roszandi/NurPhoto via Getty 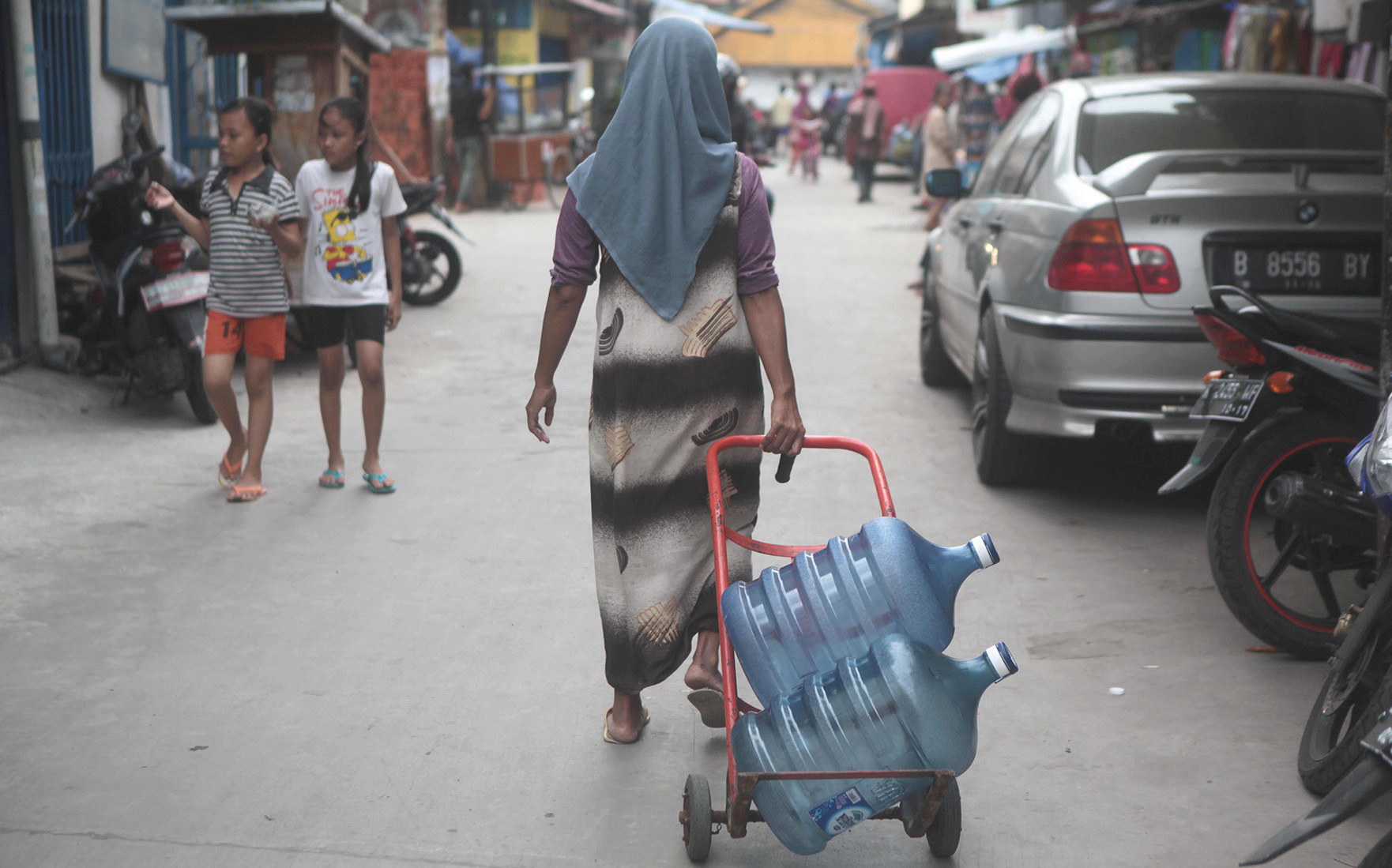 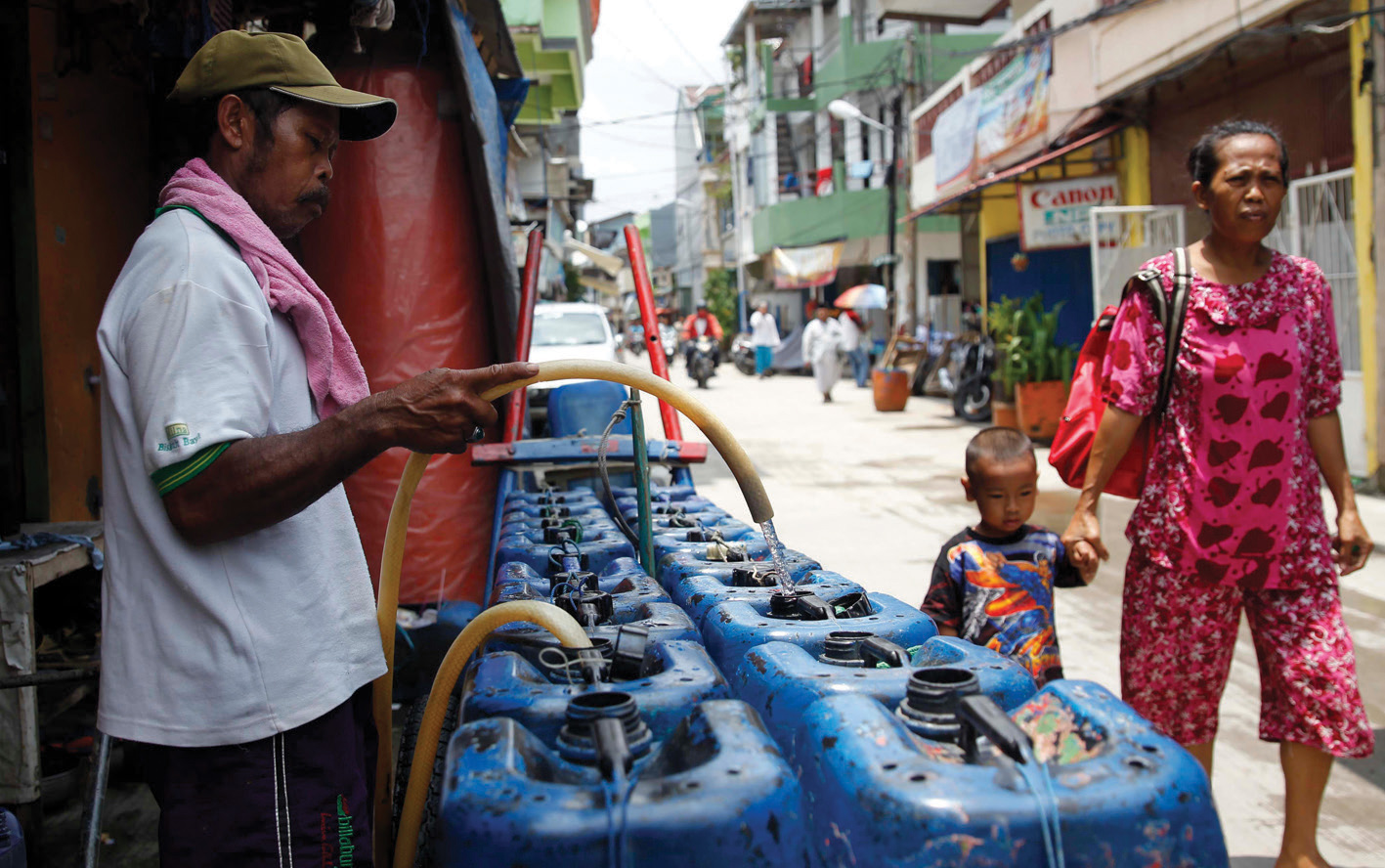 Filling up at a pump station, before he delivers water to sell to residents in Jakarta’s slums.
Photo: Garry Andrew Lotulung/Pacific Press via Alamy 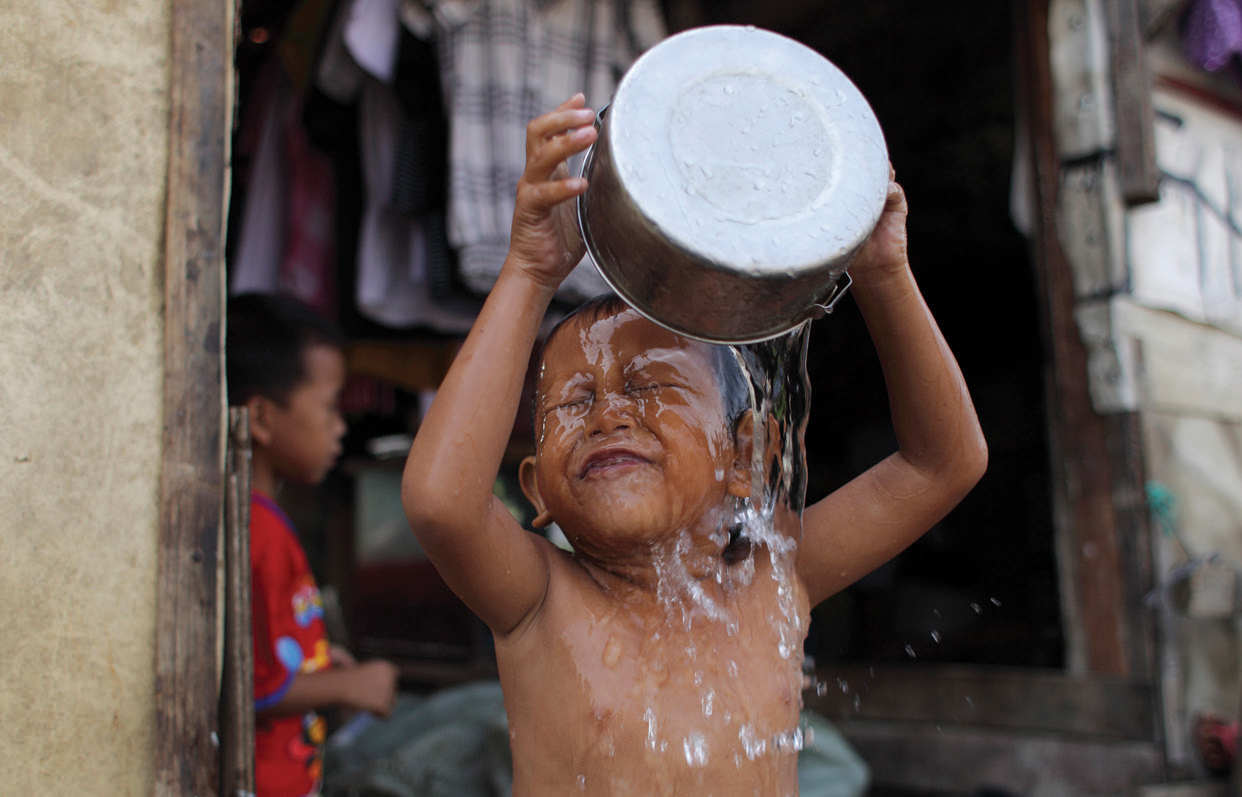 Four-year-old Rizky bathes with a can-full of water.
Photo: Beawiharta/Reuters

Imagine waiting until two in the morning for the water tap to run. This was a daily occurrence for Nurhidayah six years ago in the northern Rawa Badak district of Jakarta. ‘No water during the day,’ she remembers. ‘PDAM (the tap water company) only served water to the district between 2.00 and 5.00am.’

Rawa Badak, which literally means ‘the great swamps’, has a predominantly poor population. It has a serious problem with clean water supply and garbage maintenance, and is prone to flooding. Contrast this with adjacent Kelapa Gading, a neighbourhood that is home to Beverly Hills-style housing complexes for the elite, whose residents enjoy a much more reliable tap water supply.

The lack of service in areas like Rawa Badak meant that the city’s poorest residents often had to resort to private traders for drinking water, paying about 43 cents for filling a 4.5 litre capacity jerry can – an exorbitant price compared to the 35 cents per 1,000 litres rate for tap water. When the PDAM water supply wasn’t working, the private traders doubled their prices.

Nurhidayah, who works for the feminist organization Solidarity for Women (SP), knew also that the burden of responsibility for household water fell disproportionately on women. ‘We started to think that we needed to make a move to make sure this water should be available for everyone,’ she says. ‘I saw injustice: there’s a gap between the rich and the poor. Look at Kelapa Gading – not a single resident there is struggling with the clean water supply. We are living in the capital city – why should we have to suffer from such problems?’

Under SP’s auspices, Nur began to organize in the community in order to demand change. Which is when she was shocked to discover that ‘the water was no longer managed by the state, but a private company’.

Jakarta’s water privatization story began in June 1991, when the World Bank agreed to lend the city’s public water utility, PAM Jaya, $92 million for infrastructure improvements but also pushed for privatization. Suharto, Indonesia’s most corrupt and dictatorial president, ordered the privatization in 1995 with the eventual carve-up, in 1997, of Jakarta’s water utilities between two operations: one half a joint venture between the UK’s Thames Water and a company owned by his eldest son; and the other split between the French giant Suez and a company owned by the family of a Suharto crony. (In the intervening years the make-up of the two operators has changed, with company stakes sold on to other private operators.)

A sweetheart deal guaranteed profit to the private companies allowing them to liberally raise their charges for providing water, although the government, which was responsible for levying tariffs to residents, could not hike up prices at the same rate. Nevertheless water prices for Jakarta residents soared, far beyond prices in other major cities like Surabaya where provision remained in public hands. In this manner huge public losses accumulated, and the private companies also ran down the infrastructure so that asset values became a fraction of their pre-privatization worth.

The city’s poorest residents often had to resort to private traders for drinking water, charged at exorbitant prices

These intricacies became evident to Nur when SP joined forces with other civil society groups as the Coalition of Jakarta Residents Opposing Water Privatization (KMMSAJ) to file a citizen lawsuit in November 2012 for an end to privatization and a return to public water provision. The global trade union federation Public Services International also got involved, providing experts to testify in court.

In 2015, they won at the Central Jakarta District Court. However, a year later, the private firms, along with the president, finance minister and public works and public housing minister, filed an appeal and the decision was overturned.

‘I was so disappointed that President Jokowi filed the appeal,’ says Nur. ‘Because when he was still serving as Jakarta Governor, he supported us to file the case. But he annulled it once he was elected as president.’

Eventually the case wound its way to the Supreme Court which annulled contract agreements with the two private water operators and ordered the provincial and central governments to end water privatization. The court’s decision was reached in April 2017, but only made public in October – in that time shares of both companies were sold to other investors. This raises questions for the future – why would anyone buy a company that had lost the battle?

According to human rights activist and lawyer Bambang Widjojanto, the coalition now needs to urge the government to set up a task force to guard the transition and ensure water is safely shifted to public ownership. Much will also need to be done to protect the jobs of water supply workers when the shift happens.

At the time of writing, despite the court ruling, the private contracts which should have been declared null and void, remain in force. The fear is that they could stay in force until 2023, their time of expiration, piling up public debt. On the other hand, were the government to act, there is the risk of the private companies suing the government for millions of dollars. It looks like an uphill battle and activists are gearing up, with international support, for round two.

Despite the continuing uncertainties, Nur is firm about one thing: ‘We have an equal right to a supply of water, whether you’re rich or poor, no matter what.’

Febriana Firdaus has been working as an investigative journalist in Indonesia for 10 years and has been published in Tempo, Rappler Indonesia and TIME, among others.

The people strike back
The almighty investor