Heard the tale about the private sector always doing things better? Nick Dowson wonders why it still has believers. 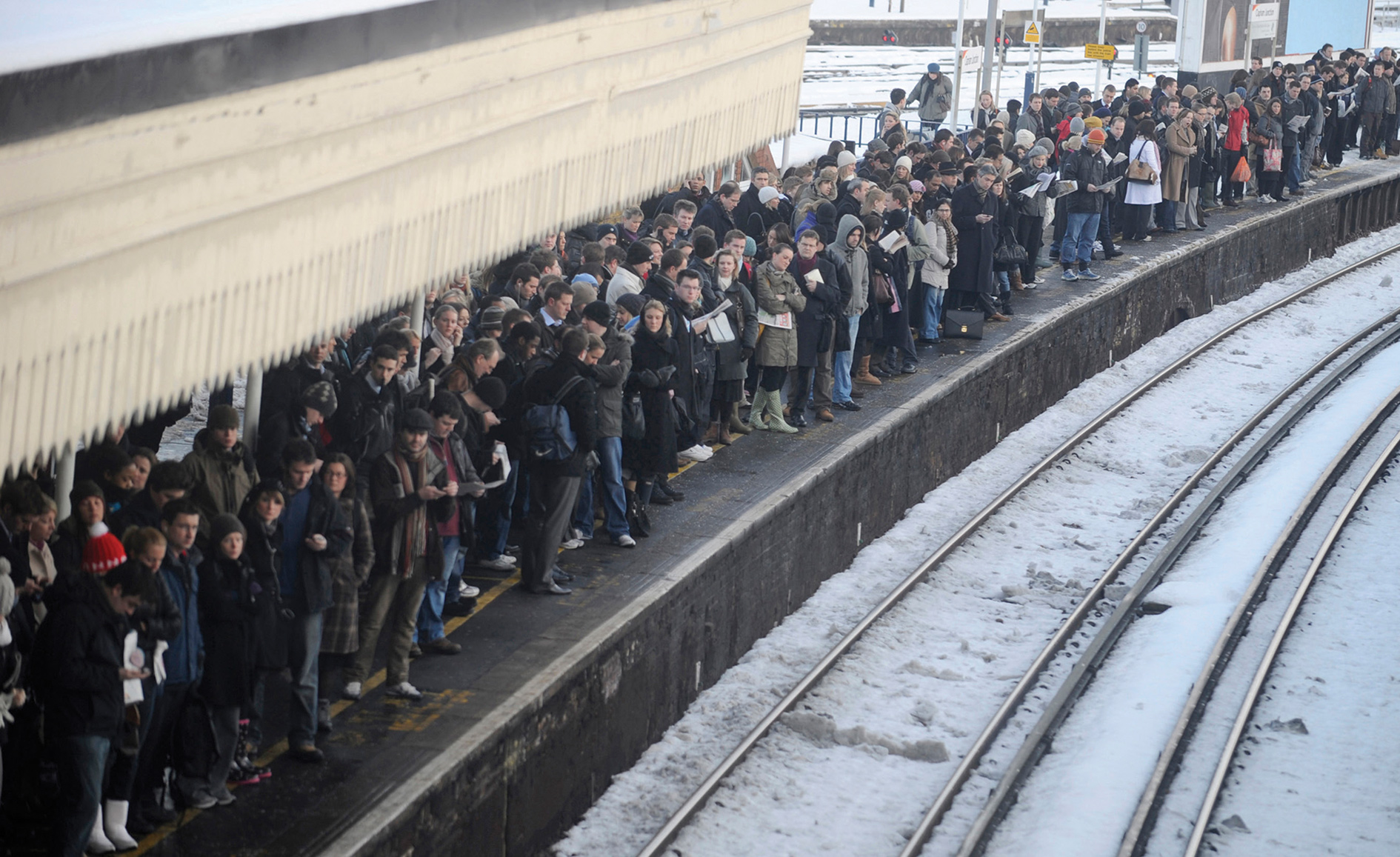 Waiting in vain: passengers at Clapham Junction, south London. According to a 2017 Legatum Institute poll 76 per cent of British passengers want the railways in public ownership.
Photo: Toby Melville/Reuters

The central myth of neoliberalism – ‘private sector good, public sector bad’ – persists in the face of all evidence to the contrary.

The private sector is held up as better, more efficient, the way to modernize… Yet worldwide, hundreds of services are being brought back into public ownership, which suggests that people aren’t buying the hype around greater private sector efficiency.

Even the cheerleaders of global capitalism have admitted doubts. Here’s the International Monetary Fund in a 2004 policy paper: ‘While there is an extensive literature on [the relative efficiency of the private sector], the theory is ambiguous and the empirical evidence is mixed.’ Or take the World Bank, who have come clean and said that ‘privatization per se does not guarantee improved performance’.

Large scale meta-studies have drawn similar conclusions: ‘the evidence shows no significant difference in efficiency between public and privately owned companies in public services’. As researcher David Hall points out, this is particularly striking because these studies have ‘been carried out by economists expecting to confirm a theoretical argument that privatization is intrinsically more efficient’.

Some research has even shown privatized services perform worse, including one of the largest studies, whose authors include Nobel Prize-winner Joseph Stiglitz.

Even according to orthodox economic theory, the idea that the private sector can do more for less applies only in a limited set of circumstances. Where there is perfect competition between private sector firms, the argument runs, this will force them to provide better services at lower cost – and those that do not successfully compete by becoming more efficient will go bust, thus contributing to greater efficiency overall.

There are two immediate issues here. Not only is competition often lacking – some services are ‘natural monopolies’ where it simply makes sense for one company to run the whole service – but the idea of inefficient firms closing down is often unacceptable. You can’t simply close a hospital or an ambulance service because market theory demands it. And when outsourcing firms – or even banks, for that matter – go bust, the state is forced to pick up the pieces. A prime example is the recent collapse in Britain of super-outsourcer Carillion, which may leave pension deficits and costs to the public sector of over $1.39 billion.

Then there’s a whole range of extra inefficiencies – described in economic theory as ‘transaction costs’ – that come with outsourcing: a bureaucracy of the market, creating lots of what anthropologist David Graeber calls ‘bullshit jobs’, which are needed to package out contracts, monitor and enforce them, tackle fraud and fight legal battles over which company gets their share of the public pie.

Healthcare is an extreme example: the US, which has a highly marketized system, spends roughly twice as much on healthcare compared to many publicly provided systems as a proportion of GDP – while many people are denied care for life-threatening conditions. Studies in less economically developed countries have also shown that for-profit healthcare providers are less efficient.

Another reason for increased costs is that private companies need to siphon off a profit. Since Bolivia nationalized its pension fund in 2006, the government has been able to redirect $500 million to Bolivian pensioners that would have otherwise gone to private investors.

Even the cheerleaders of global capitalism are admitting doubts

Examples of the private sector failing to deliver can be found around the world.

Towering debts have been run up under the Private Finance Initiative (also known as Public Private Partnership) model, where private companies use private loans to finance the construction of public infrastructure, then lease it to the government over a long period (often 20 years or more). Having already landed many UK hospital trusts in eye-watering amounts of debt, the model has now been exported around the world. In Lesotho, more than half the country’s health budget is being spent paying the private consortium that built a single hospital in the country’s capital.

In Bolivia, water privatization was swiftly followed by a rate increase of 33 per cent, triggering the country’s famous ‘water wars’.

One area where the private sector does manage to be efficient is in reducing labour costs and shedding jobs. But this is simply making employees do more work for less pay and has impacts on service quality.

Under public ownership services can benefit from efficiencies of scale. When Paris re-municipalized its water supply in 2010 it was able to make $2.45 million of annual savings through improved co-ordination and reduce prices by eight per cent – all the while increasing the democratic involvement of staff, users and local non-profits.

The municipality also worked with local farmers in catchment areas to decrease pesticide usage. When freed from the pressure of profits, services can also benefit from a shared ethos and trust between employees, rather than a culture of targets.

There are also broader questions when looking at the effectiveness of services. Are they provided where they are most needed, to those most in need? Do they provide fulfilling jobs and a decent standard of living while protecting the environment? ‘In terms of sustainability issues, reducing waste and energy inefficiency, that’s also efficient management,’ says Satoko Kishimoto, a researcher at Transnational Institute and one of the authors of the recent book Reclaiming Public Services.

Even in terms of ‘narrowly defined efficiency, that is money, [public ownership] is often more efficient than private,’ says Kishimoto. ‘But if you consider a broader sense of efficiency [too], social efficiency, the public sector has a much bigger advantage than the private sector.’

One of the most remarkable stories comes from Germany, where over 280 utilities in the energy sector have been brought into public ownership as part of the country’s ‘Energiewende’ (energy transition) – a concerted effort to rapidly shift to renewable forms of power.

Citizens in Hamburg have been motivated by both financial and environmental concerns. And they have been vindicated: two years after a referendum to remunicipalize the city’s energy grid, they had brought 23MW of wind and solar online – enough to supply around 15,000 households. For Hamburg’s voters, the case for public ownership was straightforward. ‘Because’, as the campaigners’ slogan went, ‘it is worth it.’

Nick Dowson is a writer and investigative journalist who has written on topics including health, technology and power, housing, transport and the environment. He is currently New Internationalist’s Web Editorial Intern and can be found on Twitter @nickmdowson.