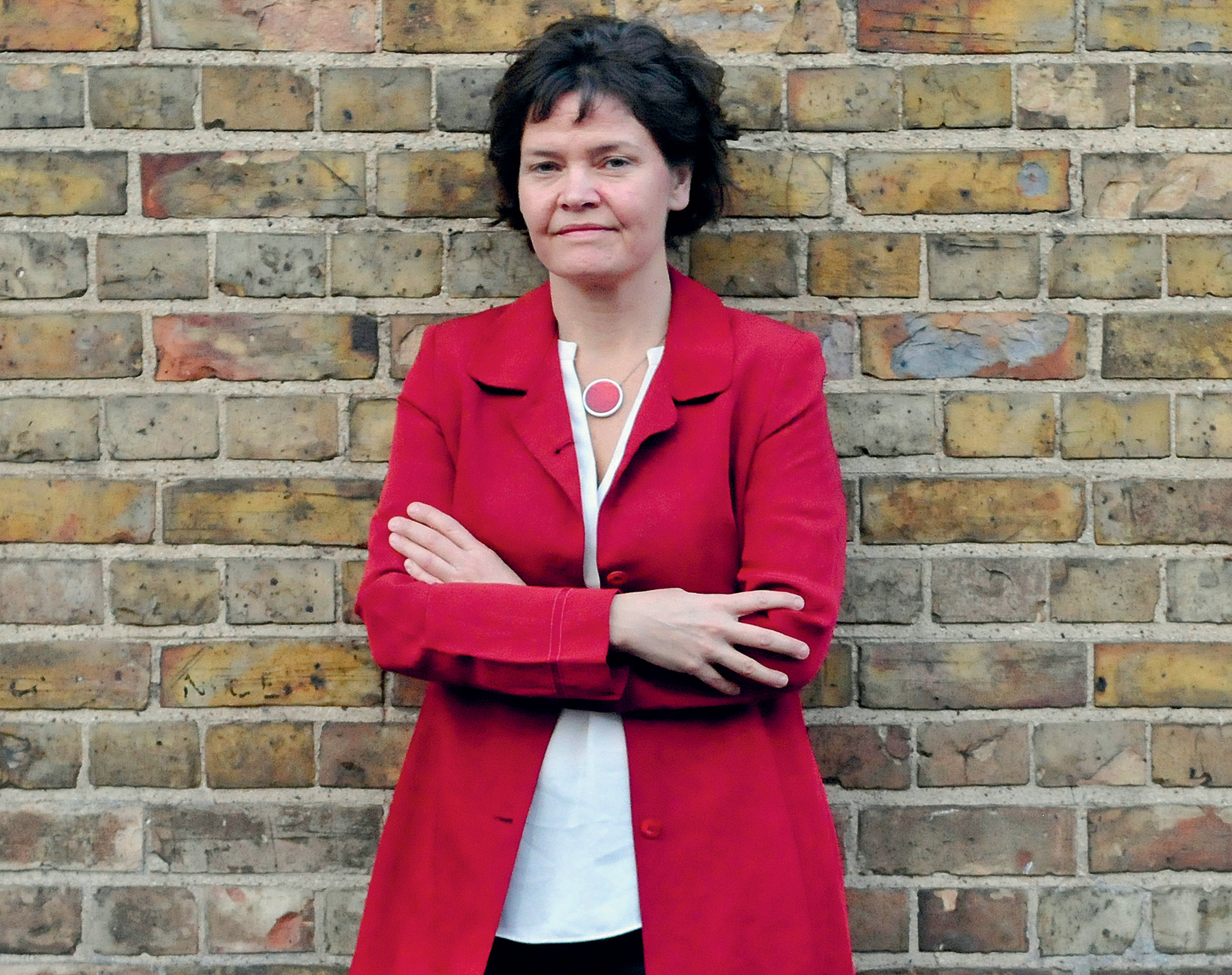 Hazel Healy: You’ve worked up a blueprint for the world we want to create, one that offers humanity a new ‘compass for prosperity’. Can you explain the concept of Doughnut Economics that lies at the heart of this?

Kate Raworth: The question I seek to answer is: how do we meet the needs of all people within the means of the planet?

My big – but simple – vision is this idea of a doughnut. In the middle, there’s a hole where people are falling short on the essentials of life – food, healthcare, education and housing. The outer ring is the ecological ceiling of resource use: climate change, freshwater stress, biodiversity loss. The doughnut is the ‘safe space’ in between these two.

The University of Leeds has modelled national doughnuts for 150 countries. It shows how a low-income country like Zambia is hardly overshooting any biophysical boundaries but massively falling short on meeting almost all people’s essential needs.

So, the doughnut framing is really about coming back into balance. The planet cannot take the aggregate effect of all of us overshooting. Progress can no longer be endless growth, a line going upwards.

You wrote Doughnut Economics in 2017 with students in mind. But the book became a surprise hit: a Sunday Times bestseller and Forbes' Book of the Year. Its success has led to invites to speak at the World Economic Forum and ‘high-yield finance’ conferences of major banks. Why do you think they are picking up on your ideas?

Well, it’s fascinating, isn’t it? The interest is coming from the heart of the places that you expect most to resist. I think it’s partly because the one per cent are interested in the backlash against them. But also, that there’s a growing recognition from the very heart of business that it is destroying the living planet, which underpins humanity – and business itself.

And while of course many people working in banks, insurance, pensions and government treasuries are hugely resistant to my ideas, there’s always someone who is trying to bring about change from the inside.

I’ve been amazed by the level of interest from governments – from across the political spectrum. At an event in the Netherlands, I gave a talk to the Ministry of Economic Affairs and Climate Change, and the room was overflowing. The organizer put it down to there being a real hunt for new ideas: ‘It’s like rain falling on barren land’, they said.

It’s not easy for someone to tell you why the doughnut is wrong. People find it compelling. They understand that there are tipping points because we are seeing, witnessing and living through them. They recognize that people have essential human needs – the inheritance of 70 years of human rights work at the UN. People agree with those fundamentals.

And the question is, can those policymakers and civil servants actually translate these ideas into policies? Where do they get stuck?

Engineers have told me change is blocked as soon as treasuries start talking about ‘optimal cost’. Can you expand on this and explain how we go about persuading economists to think differently?

Yes, treasuries are where things are getting stopped. In the UK there’s something called The Green Book, which is the set of rules by which Treasury logic runs. And it discounts away the future, and uses cost-benefit analysis.

It’s based on an economics of incrementalism, which says we must always spend our time looking for the optimal. So, by that logic, we want to pay the least amount of money for the greatest amount of effect, to not be wasting money.

But we’re operating in a world of irreversible, catastrophic possible changes, which science tells us are very close. So, the whole machinery, mindset and tools are just not fit. But treasuries and mainstream economic analysis have built themselves up around them.

I speak to civil servants and the economics research teams in banks – the holders of this logic. I try to bring in a different logic that introduces a new set of metrics that can’t just be reduced to finance.

I do think it’s important to step out of the neoclassical frame. Some streams of environmental economics try – with the best intent – to take ecosystems, society and human wellbeing and add them up as forms of wealth. But the danger is, while you may win a battle over one forest, you reinforce the framing of the living world as a balance-sheet asset.

How does the doughnut theory apply to low-income countries, which are still struggling to get anywhere near that safe space – the first ring of the doughnut – where their citizens’ needs are met?

I strongly believe that today’s low-income countries absolutely will and must and need to see more of what we call ‘economic growth’ to thrive. There will be more market activity, more things bought and sold and more state activity to provide healthcare, education, housing, roads, energy and transport. That’s precisely why high-income economies need to get out of the way and make ecological space for others. So, I say we’re all developing countries now – with very different trajectories. How can you claim to be a developed country if you meet people’s needs yet massively exceed the capacity of the planet in the way you do it?

It’s a deeply undesirable form [of development] to pursue. We need emerging economies to take a different trajectory. 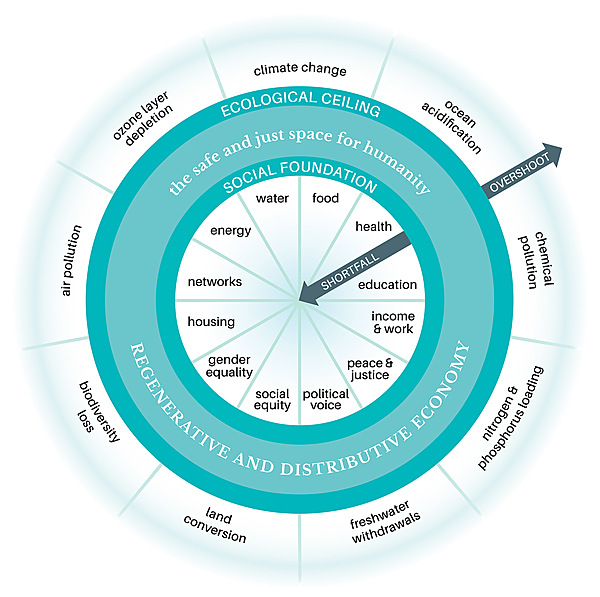 The Doughnut of social and planetary boundaries.

Can you paint a picture of what life would be like in a circular, redistributive ‘doughnut economy, powered by sunlight’? Would people have ‘jobs’ as we understand them now?

I think one of the tasks of the 21st-century economist is to help design institutions so that people are remunerated where they need to be remunerated. This is a great big redesign challenge.

Work happens in four spaces: the market, the state, household and the commons. They are all really valuable ways in which we organize to produce goods and services that we want and need.

Now, economics today starts, on day one, with supply and demand: with the market mechanism. But we also have the state. It hires people to produce the things that the market will often fail to produce – such as vaccines, roads or education.

Another form of work is the household, where each of us starts our day. Caring work is essential; so much of human wellbeing relies on it. But it’s been left invisible in economics because it’s unpaid, falls outside the market and is done by women.

The fourth space is the commons, which many people don’t understand because it’s so deeply neglected. This is where people come together as a community and co-create valuable things – whether that’s Wikipedia on the web or a community garden in a neighbourhood.

So, in a doughnut economy, the idea is that people can collaborate and work, whether they are paid a wage through the market, or work together to create free goods and services, or care for others, or are employed directly by the state. But we’ll need a shift in the balance between these four spaces. If we think about the economy we have, and where we want to get to, there’s a lot to be done.

Do you see any signs, or trends, that we are moving in a doughnut direction?

The great news – and we really need to help people see the positive possibilities here – is that new technologies are completely transforming how we organize and produce things.

In the 21st century, the core technologies: (i) how we produce energy, (ii) how we make things (iii) how we communicate, and (iv) how we create shared knowledge are asking to be distributive by design. So, you can go from a massive oil rig to a solar panel on the roof of every home; from production in a massive factory owned by corporations to desktop manufacturing with 3D printers; from a centralized switchboard to mobile phones in every pocket; from patents and copyright to Creative Commons licensing.

If you put all those technologies together, you get an economy ‘powered by sunlight’ where production is distributed: small, local-scale using both the communications platform of the internet and knowledge that’s open source and shared.

Take community-owned energy – it’s popping up all over. Then there’s the rise of employee-owned enterprises, the return of co-ops, the rise of new business models: new, regulatory legal forms such as Community Interest Companies in the UK. And then you have governments like Wales that has passed a ‘Well-Being of Future Generations Act’.

Can you name any concrete, fiscal policies that would push things towards the doughnut?

The obvious shift would be to stop taxing labour and tax resource use instead. It’s a no-brainer. It would make companies completely reorientate, kickstart far more effective use of resources and probably lead to the employment of more people to do labour-intensive work instead of wasting energy and materials. So yes, that would push things towards the doughnut.

I was talking to some of the people working on the Green New Deal in the US. We had long conversations and yes – it combines social justice with ecological integrity. It’s saying we can do both together, in fact we can’t do them separately. So, I’m absolutely for that.

And then we also need to tackle the current finance industry – which is designed to grow exponentially, endlessly, within a delicately balanced living planet: that needs questioning the most.

Is there a role for markets in this transition?

I absolutely see a role for markets. Right now, you have got market prices that are starting to reward renewable energy in more and more national markets.

You’ve got a whole raft of countries, sitting underneath the doughnut – many of them are very, very sunny countries. When they come to invest in their energy systems, they’re going to invest in renewables. So that is very positive.

But we will also need a moral drive. The pressure that started in the fossil-fuel divestment movement in universities and foundations is now moving through into the very mainstream heart of finance of banks and insurers.

It seems like every fortnight a new bank, a new lender says, ‘We’re going to stop funding coal.’ Now, some of them are saying that because they see it in terms of market-based returns – a fear of stranded assets. But I know – from people inside the industry – that it can be a principled position. They’re saying, ‘We just shouldn’t be doing this.’

They have older investors who are reaching the legacy stage of life and saying: ‘Actually, I want to divest from damaging industries.’ And then there are the millennial inheritors who say, ‘Dammit, Grandpa, what were you doing? I’m going to invest this completely differently!’

These three things – morality, the pricing, the value shift between the generations – will be key.