Four key findings from climate polls of 2019 by Danny Chivers. 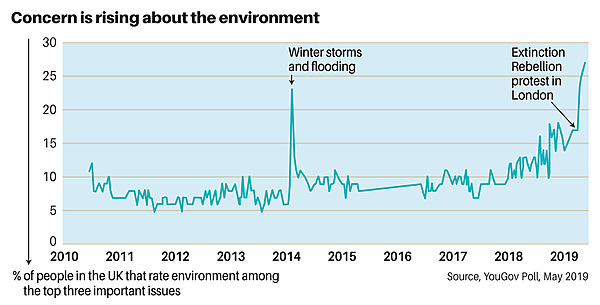 Ever more urgent scientific reports. Bigger and more frequent droughts, floods and storms. High-profile protest movements, such as Extinction Rebellion and the school strikes. Over the last year, all of these things have been turning the spotlight on to climate breakdown. But how has this affected public opinion? This is what the polls tell us:

1 Most people are worried now

In much of the Global North, the percentage of people expressing concern about the climate crisis has hit a new high. A majority believe the world faces a climate emergency in the UK, US, Canada, Germany, Poland, France, Brazil and Italy, according to a poll in September 2019.

In the UK, recent surveys put climate change ahead of Brexit as the public’s Number One issue, with around 80 per cent of people saying they’re worried. This is higher than the previous peak of climate anxiety during the winter floods and storms of 2014-15.

In the US, climate rates as the public’s third most-pressing issue, behind health and immigration. But, at nearly 70 per cent, concern is at its highest since Yale researchers started tracking this in 2008, and includes 29 per cent who are ‘very worried’.

In Australia, climate has leapt to 4th place on the public’s list of concerns – up from 14th in 2014 – with around 80 per cent fearful of more droughts, flooding and water shortages.

2 We know humans are to blame

For many years now, in most countries where surveys take place, there’s been a clear public majority who understand that climate change is caused, at least in part, by human activity. Those numbers have continued to firm up. For example, 88 per cent of people in the UK (and 75 per cent in the denial-heavy US) believe humanity bears at least some responsibility.

In the Global South, where many countries have been experiencing the impacts of climate change for decades, the role of greenhouse-gas emissions – the vast majority of which have been emitted by the industrialized world – has become ever clearer. Southern countries at international climate negotiations are making increasingly urgent calls for action. In India, 94 per cent of people believe that climate change is caused by humans – and 93 per cent believe it will impact on their lives.

In the UK, two-thirds of people believe that flying should be restricted, and a similar majority think the government should ban environmentally damaging products. Half of all Australians want a moratorium on new coalmines and 70 per cent want the government to phase out coal entirely. In the US, 72 per cent want more regulation on greenhouse gases and 70 per cent value environmental protection over economic growth.

4 Knowledge is not enough

A survey shows that 90 per cent of Canadians are concerned about climate change, with 63 per cent feeling ‘desperately concerned that if we don’t take drastic action right now, the world may not last much longer than another couple of generations’. A new poll from 2019? No, an Ipsos survey from 2006.

While climate concern is reaching new heights today, we must remember we have seen these kinds of peaks before. It may be that the speed and severity of climate impacts today keep concerns high but there is always the risk that other events – such as a new financial crash – could throw up more immediate concerns that trump climate.

Meanwhile, the 2019 Australian election shows how awareness doesn’t automatically bring change: despite high levels of climate concern, the notoriously pro-coal Conservatives were re-elected after they stoked fears that pro-climate policy would harm jobs and the economy.

The final take-home message from these polls? The problem isn’t that climate action is unpopular, it’s that the interests opposed to climate action still have too much power and influence. We need to change that.

This article references polls from the following sources: