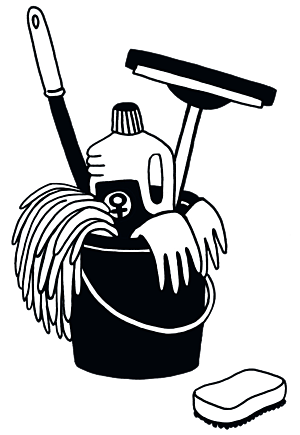 Q: I’m approaching middle age and hiring cleaners seems now to be increasingly common among my peers. Often they reach this decision after arguments with housemates or partners, which I can’t help but see as a symptom of individualism: instead of solving the problem collectively, it is outsourced. I have no problem with people needing to hire help because of poor health or old age, but when did the rest of us become too busy to clean up our own dirt? As a feminist I find this particularly jarring – some people can pay their way out of doing domestic labour, employing others (often migrant women) for less money than they earn. But am I being too selectively judgemental? I don’t have such an issue with people paying others to look after their children or clean their business premises, for example, and I’m not bringing about radical social change just by cleaning my own bathroom.

A: Feminist theorists call this work ‘social reproduction’ – the range of activities that we do outside the workplace that contribute to the ‘making and remaking of people on a daily basis’. Housework is a big part of it. Washing the dishes, hoovering carpets, bleaching the toilet bowl, even recognizing that there is housework to be done – these are all activities that society depends on, literally, so that capitalism functions. It’s also a type of labour that is ‘devalued, invisibilized and feminized’.

Some people on the Left find the idea of paying for social reproductive labour galling. The image of a migrant woman cleaning the house of people who consider themselves progressive – in an era of resurgent white supremacy and endemic low-pay for the working classes – can leave an unsavoury taste in the mouth.

Although I sometimes struggle to fit it in, I’ve avoided having a cleaner so far and find doing the work myself quite therapeutic. However, I can’t tell anyone else how to manage their time. Depending on the size of the house, the number of occupants, and the demands of their jobs, it actually might not be possible for people to clean it to a decent standard. Of course one can develop a rota system by which everyone cleans, but sorting out how to discipline those who don’t do a good job or miss their shift could make for a toxic living situation.

So, think of it like this: if you do need the labour power of a cleaner you’re not ‘outsourcing’ a problem so much as acquiring a responsibility – that of an employer. Pay your new employee a generous wage (why not what you’re paid yourself?); draw up a contract that entitles them to all the benefits and rights that any worker, even part-time, should have, such as being a member of trade union; supply them with high-quality equipment; and pay for their commute. Avoid third-party services that exploit their workforce by taking a big cut of their pay; apparently, many British cleaning agencies prefer cleaners who don’t speak English and can’t easily argue for fairer pay.2

Perhaps even reach out directly to undocumented migrants who might appreciate the stability of a regular source of income from people they can trust. Don’t do this in the spirit of paternalism, but because you’re obliged to provide a dignified wage-labour relationship – the very same you would expect in your own workplace.

Also – and we might call this the cleaner’s paradox – make sure you tidy the place up before they arrive each week: no-one should have to work in a tip.

Big Bad World
What if…