Zoe Holman reports that Greece is at breaking point as refugees cast out by Europe. 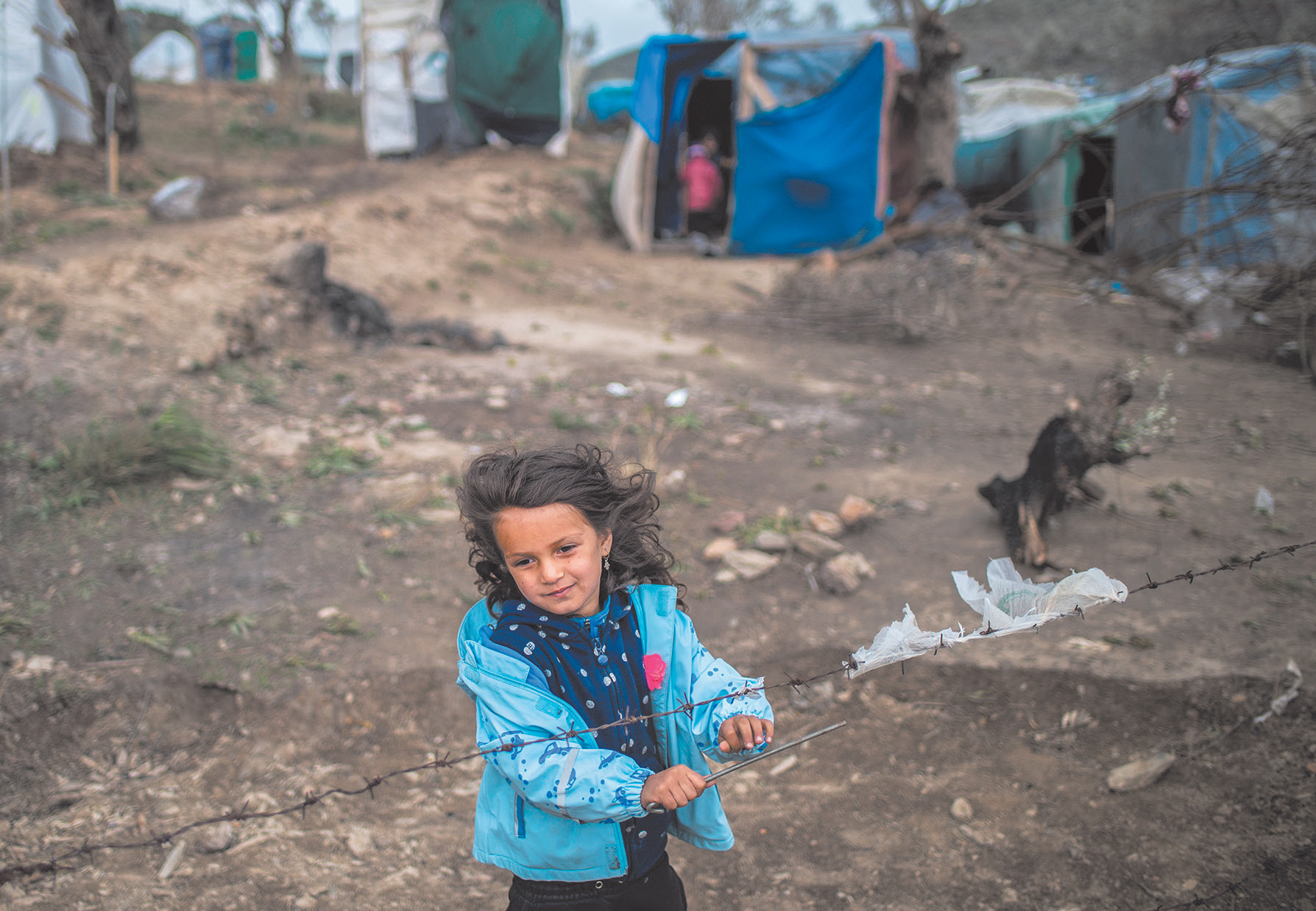 Refugees stranded: a little girl stands by the barbed-wire fence in a temporary tent camp near the overcrowded Moria camp on the Greek island of Lesvos.
Photo: Angelos Tzortzinis/PA

A young Afghan boy stares through the fence at the burnt-out shell of a building downhill from Moria refugee camp on Lesvos island – it was his school, he tells me. Run by a Swiss NGO, the centre was destroyed in early March in what reports have confirmed as an arson attack by far-right extremists.

The situation for refugees on the Greek islands has sharply deteriorated in recent months. A six-year-old girl recently died in a fire at Moria camp and reports have emerged of push-backs and beatings by Greek border guards, with three refugees allegedly shot dead at the border with Turkey. Far-right protesters on the Aegean islands have at times prevented refugee boats from landing. The advent of Covid-19 has since added a new threat, with medical authorities issuing grave warnings of the virus reaching the camps and the risk posed by lockdown restrictions.

Pressure has been mounting on Greece since 2016 when the European Union (EU) first cut a deal with Turkey to curb migration into the continent, leaving thousands trapped on Europe’s southern border. Greece reported 100,000 pending asylum cases at the close of last year. And an estimated 42,000 asylum-seekers are detained in unsanitary, overcrowded camps on the Greek islands, now at breaking point.

Aid groups, activists, locals and asylum-seekers themselves have long appealed for evacuations to the mainland. But in February, the conservative New Democracy government announced plans to build closed detention centres. Strikes and protests in opposition were soon followed by riots, with ferry-loads of police shipped to the islands in scenes likened to a war zone.
Matters were made worse in February with the order by Turkish President Recep Tayyip Erdoğan to border guards at his country’s land and sea frontiers with Greece to step down.

Turkey, which hosts some four million refugees, was overburdened, officials said – the refugees were now Europe’s problem. Thousands of asylum-seekers in turn gathered at the sealed border, where they remain stranded following the Greek government’s subsequent suspension of all new claims.

‘I didn’t feel there was much of a fascist sentiment in the area before, but now people feel licensed to express extremist views under the new government,’ says one local from the northern border region, noting that this month he unfriended at least 50 Facebook contacts. Responding to Erdoğan’s move, Europe has continued to call for the EU-Turkey deal to be upheld, while refusing to significantly increase its own intake of refugees. Praising Greece as its ‘shield’, the EU announced an additional $700 million in assistance to Greece, alongside a redoubled ‘rapid border intervention’ by Frontex and a $2,000 inducement to existing asylum-seekers on the Greek islands to leave the continent.

But the border crisis shows no sign of abating. For those on the islands – residents, humanitarians and asylum-seekers alike – it is all the more galling for its predictability. As one Greek aid worker notes: ‘Three years ago we had 8,000 in Moria with people dying of cold. Now we have 20,000 and people are dying from knives and fires. We all saw this coming.