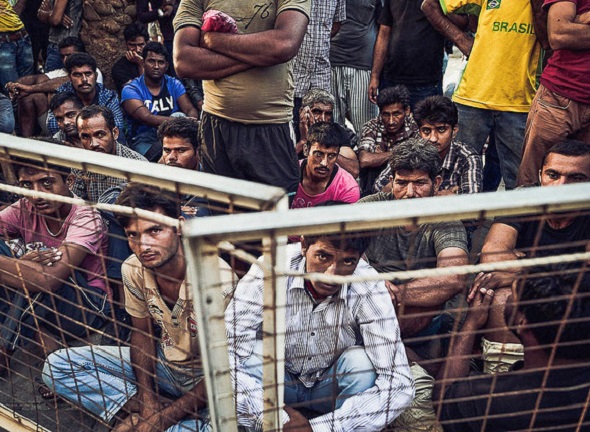 Refugees wait outside a police station which serves as their registration centre, Aug.15, 2015, in the town of Kos at the southeastern Greek island of Kos.
Photo: Freedom House

Eleonas, on the outskirts of Athens, is home to Greece’s first official, open reception centre for refugees. Living conditions for the 200 or so residents tower head and shoulders above so-called ‘reception centres’ for asylum seekers elsewhere in the country. But it’s special for another reason: it exists because the refugees themselves made it happen.

In October last year, Afghan refugees were sleeping by the hundreds in a local park. In response, the Greek government set up Eleonas – in an industrial park in Athens – but a long history of racism and abuse meant refugees were unwilling to go there. Everyone thought Eleonas would just be another detention centre.

Then the Greek Forum of Refugees stepped in. This international network of communities – from Afghanistan, Sudan, Somalia and beyond – worked to build trust with the newly arrived refugees, and volunteered for months to make Eleonas what it is today: the most humane official camp in Greece.

The new EU-Turkey deal has opened an opaque and industrious system of mass deportations. This is already crippling the capacity for independent volunteers to act as human rights watchdogs and establish open humanitarian spaces for refugees. In this context, the role of refugee-led organization will become more vital than ever.

Yonous Muhammadi is the Forum’s president. A mild-mannered man, he has represented refugees in the Greek capital for over a decade. He speaks with the easy frankness of someone whose authority stems from a wealth of collective experience.

Forced to flee Afghanistan while at medical college in 1997, he supported refugee communities in Pakistan and later moved to Iran, where he risked imprisonment to teach at a secret school for ‘illegal’ children. After being imprisoned for trying to return to Afghanistan, he resigned himself to leaving permanently, and reached Greece, via Turkey, in 2001.

Younus has encouraged Afghan communities in Athens to organize. They formally combined with other refugee groups in 2012 to become the Greek Forum of Refugees, which has become a powerful force for mobilizing and getting refugee voices heard. ‘All our goals are achieved by participation of refugees themselves,’ says Younous. ‘And Eleonas is an example of how important that participation is.’

How have refugees in Greece fared through the winter months?

This winter is especially cold and conditions are really difficult. People fleeing are still obliged to arrive in Greece via the Aegean Sea, and still the EU will not even discuss safe, legal passage. Greek authorities have also been discriminating against independent volunteers. On the Greek islands, volunteers’ work is essential for the safety and reception of the refugees. They should be thanked, not arrested.

The situation at the Greek border is also really worrying. Many vulnerable people are trapped at the border in freezing temperatures. A few groups are taking advantage of this situation to rob refugees. Just recently, an attack left someone dead. That proves how little protection there is.

People stopped at the border can return to Athens, but the situation is no better here. The official reception centres will only accept Syrians, Afghans, Iraqis, Palestinians, Eritreans and Yemenis. Otherwise, unless you are an unaccompanied minor, you are sleeping on the streets or in parks with no assistance, or being arrested and taken to detention centres, where people are really afraid for their survival.

Tell us about conditions in the official ‘reception centres’ for asylum seekers in Greece. In 2014, a lot of human rights groups condemned conditions as deplorable. Has anything changed?

In 2014, we had more than 9,000 people in detention, even Syrians. The numbers have dropped but conditions still do not meet the standards of human rights law. In September 2015, there was a hunger strike by refugees from Pakistan and Bangladesh. The conditions are impossible! When you see it, you can’t believe how people can survive there.

We have reports [documenting the poor conditions]. Greek friends speak out about it – but the problem is, when refugees are freed they just want to leave because there is no trust in the authorities.

And when they go the Greek police after attacks by fascists, the police do nothing. So if there is a law broken, most of the time they don’t want to speak about that, they just want to leave.

Reports continue to surface of abuses and illegal pushbacks by the Greek authorities at the borders. The Police deny that it’s happening at all. What are your thoughts?

Before 2014, there were huge numbers of pushbacks, not only at the Evros land border [with Turkey] but also in the Aegean Sea around the Greek Islands. We have collected witness statements from refugees themselves.

In some cases they tried to cross seven times, but every time they were pushed back – not just deported, but removed very violently. There have also been many cases of sexual abuse. And we are still getting cases like this, with authorities deporting refugees back to Turkey and saying: ‘don’t you dare come back to this border.’ People are beaten and robbed.

We have evidence of these things. But the problem is, they say, when we as refugees are speaking it is ‘not so credible’. They always say this. The Greek authorities will never accept that they have carried out a single pushback. But the research, by Human Rights Watch and others says otherwise. There are still pushbacks happening at Evros, I can tell you that.

The presence of big aid agencies in the Greek islands – UNHCR, Red Cross, UNICEF and so on – increased towards the end of 2015, but has been quite minimal given the scale of the crisis. You’ve highlighted the vital role of independent volunteers. Can you tell us about that?

Yes, the most important help comes from the simple solidarity movements. It is self-organized people trying to help. That is very important. There is no other initiative or motive behind this, they just want to help as fellow human beings. So there is no money, no salary, nothing – just humanity.

Independents are the first people on the scene to rescue and welcome refugees. UNHCR and other organizations, with all their power, are helping less than ordinary people in places like the [Greek island of] Lesvos at the moment.

How do you think the Paris terror attacks by ISIS last November 2015 have impacted refugees in Greece and Europe?

The anti-refugee and anti-migrant voices all over Europe are trying to use this to call all refugees terrorists. But the reality is they are running away from the terrorists in their own countries. And usually terrorists don’t use the refugee route. The families coming from Syria, from Afghanistan are the victims of terrorists.

We have held demonstrations against ISIS and the Taliban, and in solidarity with the victims of terrorists in France. We can understand families’ mourning because we know this feeling well. All of us have lost someone. My 16-year-old brother died in a terrorist attack, as did my cousin. It should be clear that we are running away from them and fighting against them in every way we can.

What is it like to be an asylum seeker in Greece today? What psychological pressures are people put under?

Until 2014, we were recording daily attacks on refugees. In 2010, our offices were attacked by Golden Dawn. But this issue goes beyond the fascists: the whole asylum system is a massive obstacle to integration and empowerment. Some people wait ten years for a decision, unable to imagine or plan any future because the rights they have are so limited.

The Greek state provides no support to students. We often meet people pursuing their studies without shelter or food. This is a real problem.

Victims of torture, and trafficking struggle to integrate and are particularly vulnerable because the authorities provide no access to psycho-social rehabilitation.

What is the long-term solution to the European Union’s current refugee crisis?

The problem with the EU is the powers are always trying to push their problems on to each other, especially to the outer border. There is no responsibility sharing. I have been here more than 13 years and I am fed up with this. Solidarity should be the responsibility of every country. No one wants to take the refugees in the same way that no one wants to leave their homes in the first place. The main solution is to stop the wars! Why is there this in Syria? Why did I have to leave Afghanistan, for example?

The other thing that’s important is functional, realistic co-operation with the countries that border Syria. Not like they’re doing with Turkey – it wants EU money and membership and doesn’t care about the refugees. At the moment, all the decisions the EU and other are making are in their own economic and geopolitical interests. Only if there is political will to benefit the refugees, will we be able to find a solution.

I don’t hold out much hope that it will stop. It [the West] interferes in Afghanistan – not in my interests as an Afghan – and here we are, 13 years later, thousands of soldiers in Afghanistan, billions of dollars spent and what is the result? We are still hearing of cities being captured by the Taliban and others and so we have thousands of people who are running away.