A purpose-built camp offers refugees a sense of relief, but for how long?, asks Sarah Shearman. 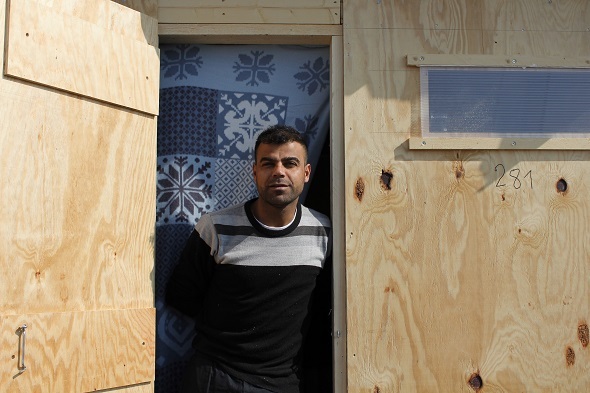 Simon, a Kurd from Iraq, in his new shelter.
Photo by Sarah Shearman

In Grand-Synthe, a suburb of Dunkirk in Northern France, a ragtag group of volunteers from Europe and refugees from the Middle East are busy building. Together they hoist up structures, customise rows of plywood shelters, install insulation and fashion porches from royal blue tarpaulin. White dust from freshly sawn sheets of fibreglass blows across the vast gravel park. Everyone is hustling for spare hammers and nails.

This is the only purpose-built migrant camp in Northern France, a region where thousands of refugees from the Middle East and Africa, fleeing persecution, violence, terror and war, dwell in a state of purgatory, hoping that one day they will reach the UK.

This new camp, which consists of hundreds of wooden shelters to accommodate up to 2,500 people, is also the first in the region to meet international humanitarian standards. Most of the residents are Kurds fleeing Iraq, Iran and Syria, who, until recently, were living in squalid conditions in a nearby camp in Grand-Synthe, dubbed the ‘forgotten Jungle’.

Many refugees opted to stay in the Grand-Synthe Jungle because it was quieter than the more established and better known Jungle camp in Calais. The living conditions in Grand-Synthe, however, were far worse. Prone to flooding, the swamp-like camp did not have enough water points and toilets for its 3,000 residents. It was rife with disease and vermin. People there, including an estimated 250 children, were sleeping rough throughout the winter in flimsy, mud-soaked tents and shelters, while the police restricted aid workers from bringing them provisions. Médecins Sans Frontières (MSF) described the conditions as ‘inhumane’.

The situation became so desperate that Grand-Synthe's Mayor, Damien Carême, turned to MSF to help fund and set up a new camp, amid resistance from the French government. The Grand-Synthe Jungle was closed down and people evicted in early March – before the new one was even finished – because the health risks there were so dire.

When I visit the camp, a week after it opened, the sense of relief is palpable. Footballs are being kicked about, a barber gives men haircuts, people play music and chat on their phones, a woman is learning to cycle – something that would have been impossible in the thick mud of the old camp. Children eat cake and fruit at a party celebrating the first birthday of one of the camp’s youngest residents, Oscar. The conditions are clearly better here, yet the refugees I speak to are reluctant to say that their situation has improved. After all, a refugee camp, whatever the facilities are like, is not where they want to be. 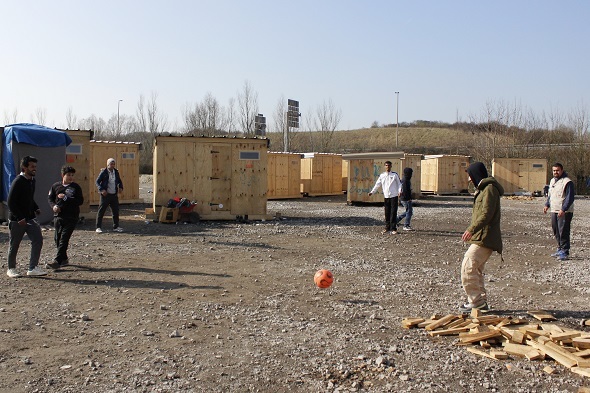 Residents kick a football around.
Photo by Sarah Shearman

The shelters are raised about a foot off the ground and wooden pallets are used as doorsteps where people can leave their shoes before entering. A married couple, Ali and Bafrin* invite me into their shelter. As we sit cross-legged on the plywood floor, which is covered by a thin layer of foam and fleece blankets, Ali shows me his plum-coloured passport. He is a Kurd from Rayna, in Iraq, and a British citizen. He was living in Huddersfield when he was granted citizenship and returned home to pick up his wife. Together, they made their way across Europe to France, but like many people in the camp, she has had problems getting her application for asylum accepted, and Ali is waiting with her. She got pregnant while living in the old camp in Grande-Synthe and is now six months along. The couple show me the scans – they are expecting a boy. Ali says the new camp is better than the Grande-Synthe Jungle, but he is worried about his wife’s health. Sleeping on a hard floor, with measly padding, is very uncomfortable for a heavily pregnant woman.

A few doors down, Simon, another Kurd desperate to return to the UK, makes tea and breakfast for some of the volunteers, using the gas stove inside his shelter. Having worked in a kebab shop in Croydon for many years, he returned to Iraq to see his dying father, and is now trying to get back to the UK. In the Grand-Synthe Jungle, where he lived for about three months, he would invite families into the sturdier shelter he built to keep them dry when the weather was particularly bad. ‘I felt bad in last camp, sad and unhappy,’ he tells me. ‘It was a very cold and dirty place, no shower and toilet. This is better than the last place,’ he says.

He feels safer here too. In the previous camp, there were shootings and stabbings, linked to mafia and smugglers operating there. ‘Now we are fine. No trouble, no mafia.’ Since my visit I learn that the Gendarmerie, the French national police, are now patrolling the entrance, and require ID from volunteers entering, with the aim of keeping smugglers out.

The camp is connected to mains electricity and has working showers and toilets. When I visit, a place of worship and onsite kitchen are being constructed. The site is run by a French organization called Utopia 56, and supported by several volunteer groups, including the Bristol-based group Aid Box Convoy. Since Utopia 56 took over managing the site, there are more restrictions on who can enter. In the last camp, people would distribute goods to refugees themselves, but Utopia 56 are trying to make the process centralised, sending goods via a central warehouse in Calais. While I am at the entrance of the camp, a man with a carload of baguettes and bread rolls – unpackaged in open boxes, several of which are strapped to the roof – is turned away.

Refugees living in the new camp are able to come and go as they please, without having to register their finger prints. Yet the location of the new camp – further out of town and wedged in between a busy highway and railway track – has heightened existing feelings of isolation.

Ivana, a Bosnian volunteer who is a refugee herself, says they have lost the sense of community that they had in the previous camp. I meet Ivana in one of the shelters, where she is drinking sweet tea and smoking roll-up cigarettes with a group of Kurdish men. One of the mugs being used to serve tea has an image of a young Queen Elizabeth II and Prince Philip on it, which we all laugh about.

The shelters each have a couple of small Perspex windows, just larger than letter boxes. Some of the residents are building porches from tarpaulin to make the camp feel more communal and tents have sprung up around them. ‘This is literally a box,’ says Ivana about the shelter. ‘I am amazed they are in such good spirits. They have to be, I suppose.’ 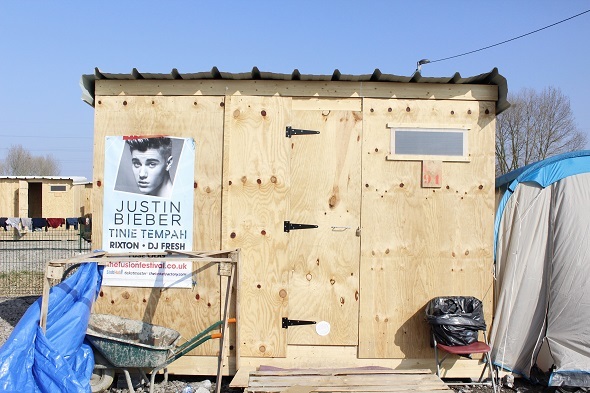 Justin Bieber poster hung up in the new camp.
Photo by Sarah Shearman

People have also started to brighten up the camp with graffiti, flags and posters, which have become a well-documented feature of the Calais Jungle. A Justin Bieber poster is pinned to the outside of one of the shelters. It is the same poster that was stuck to a tent in the previous camp, and is in remarkably pristine condition. Faris lives in the shelter with his mother. They are Bidoon people from Kuwait. The poster, he says, belongs to his brother who just a few days before made it to the UK in the back of a lorry.

Having fled Kuwait, where his father was persecuted as a political prisoner, Faris moved to Syria and then Lebanon before making the treacherous journey by boat to Greece, and travelling across Europe by foot. He hopes to be reunited with his father, sister and brother who are all living in the UK, but his mother is unwell and he does not know when, if at all, they will make it over. ‘I miss my family. I don't feel I am human when my family are away from me,’ he says. It has been six years since they were last all together.

When I meet Faris he is playing football in what he refers to as the Arab section of the camp, which consists of three shelters. ‘This is not better than the Jungle. It’s better because there is less mud, the shelter is good, it's less cold, but this is like jail,’ he says. 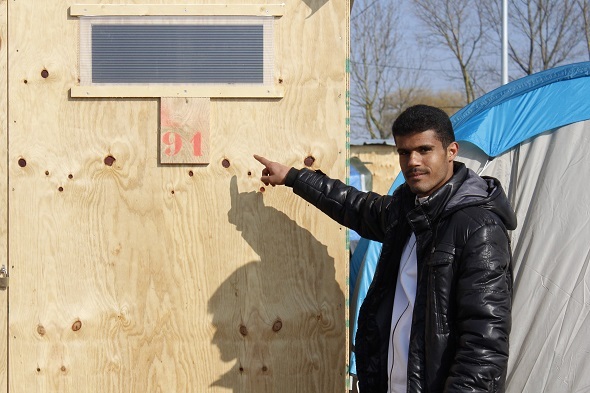 Faris has moved into a new shelter with his mother.
Photo by Sarah Shearman

Since my visit to the camp, the situation keeps improving, says Johanna Verpoort, a Belgian volunteer who has spent several months in Dunkirk. Solar panels have been installed on the huts and work is nearly complete on a communal kitchen. The camp is now full, and the volunteers are focused on getting people who are living in tents there into shelters, says Verpoort. Not everyone from the last camp made it to the new one, however, and there are concerns that there are groups of refugees sleeping rough in the surrounding area.

French authorities have inspected the camp, and agreed it meets the UN standards required to keep it open, but it is uncertain how long for. The purpose-built camp was always meant to be a temporary fix but not a long-term solution. For refugees living there, conditions have certainly improved, but they are still in purgatory – just a warmer, drier version. And this means they will continue to try and take the dangerous journey in the back of UK-bound lorries.

‘Things will only be better here when everyone, like me, who has a dream, gets their case accepted in the UK and they can go to there,’ says Faris.

Simon agrees: ‘We don’t want to stay here, we want to go to England.’

*Surnames have been withheld to protect the identity of the refugees at their request.