Noreen Sadik reports on the aftermath of a very public shooting in the divided city of al-Khalil. 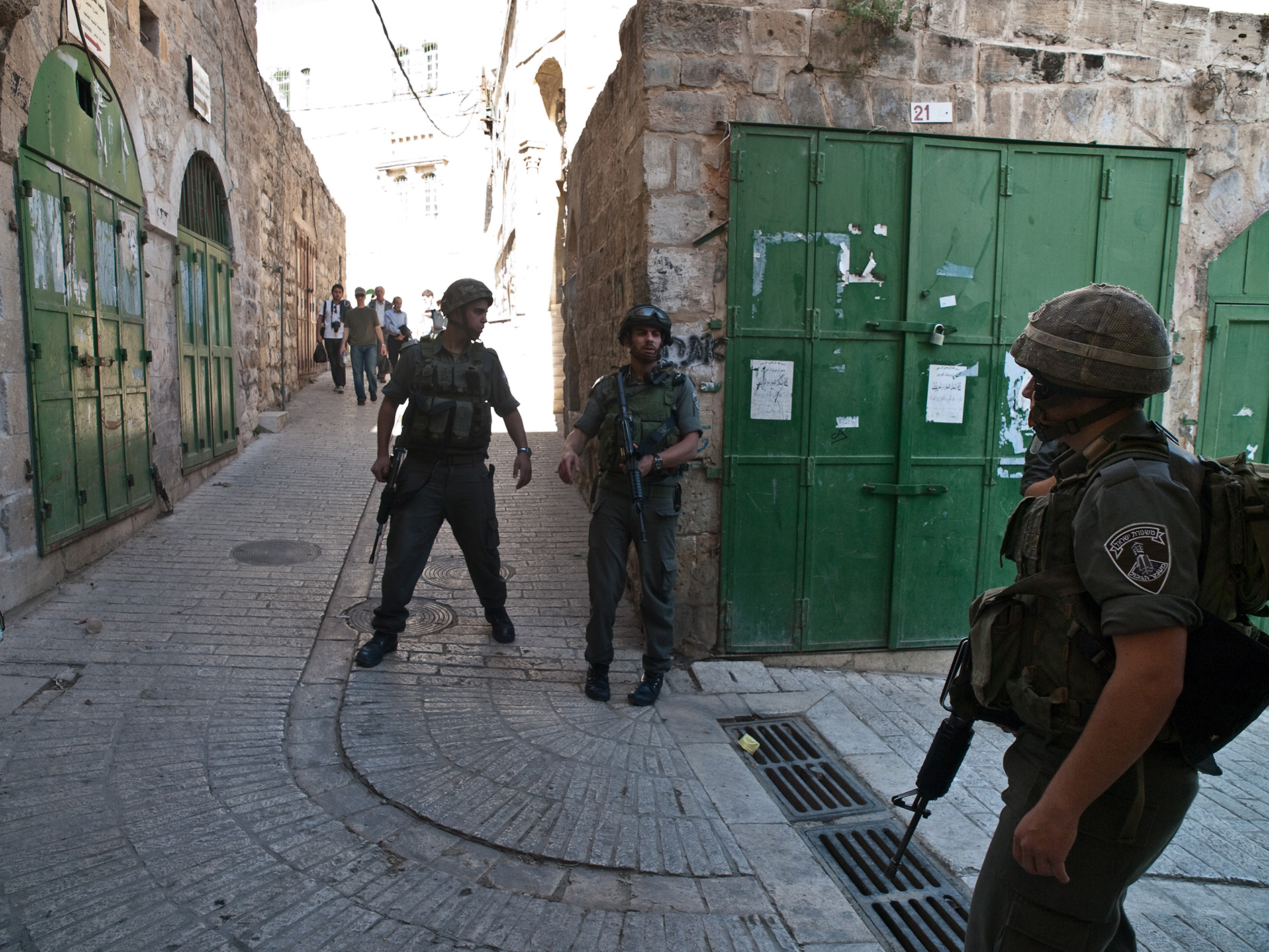 And al-Fattah al-Sharif and Ramzi al-Qasrawi, both 21-year-old Palestinian residents of al-Khalil (Hebron), were killed on 24 March 2016 after stabbing and wounding an Israeli soldier. The circumstances surrounding the death of al-Sharif, in particular, have caused an uproar in Israel, Palestine and the international community. What made it different from other killings is that for the first time, the incident was caught on tape.

Al-Qasrawi died on the spot. Al-Sharif, however, was wounded and fell to the ground. He lay motionless, still alive but ignored by Israeli medics who were treating the wounded soldier.

Imad Abu Shamsiyah, a cobbler by trade and a volunteer photographer for the Israeli human rights organization B’Tselem, heard the shots. Arriving at the scene, he saw the two Palestinians on the ground. Al-Sharif was lying on his side; Abu Shamsiyah saw a soldier push him over onto his back with his foot.

When the soldiers saw him filming, Abu Shamsiyah went to his neighbour’s house, and it was from the roof that he was able to film the damning evidence of a murder.

The film shows the soldier, with arm and shoulder wounds, being put in the ambulance. It shows a scene of relative calm until a soldier cocks his gun, takes a step towards al-Sharif, and shoots him the head. And it shows a lack of shock, surprise or condemnation among the soldiers as the shots rang out.

According to the United Nations Office for the Co-ordination of Humanitarian Affairs (OCHA), ‘Since 1 October 2015, a total of 136 Palestinian suspected perpetrators, including 32 children, were killed by Israeli forces on the spot in their response to attacks and alleged attacks against Israelis in the occupied Palestinian territory and Israel.’ So far in 2016, there have been 52 Palestinian and 4 Israeli fatalities. In al-Khalil, since 1 October 2015, 61 Palestinians have been killed by Israeli soldiers.

‘The shooting of a wounded and incapacitated person, even if they have been involved in an attack, has absolutely no justification and must be prosecuted as a potential war crime’

Al-Khalil, the largest Palestinian city, has been divided into two sections – H1, which is under Palestinian control; and H2, which is under Israeli military control. Within the borders of the city are Jewish-only settlements. As a result, as a means of protecting the 850 Jewish settlers, there are checkpoints within the city.

The incident involving al-Sharif took place near a military checkpoint in the Tel Rumedia neighbourhood.

The soldier, who has not been named, claimed that he was acting in self-defence; afraid that, although al-Sharif was motionless, he might try to detonate a bomb.

The video, however, shows soldiers walking near al-Sharif as he lay on the ground, indicating that he did not pose a threat. The voices of soldiers saying, ‘this dog is still alive’, and ‘this terrorist deserves to die’ are heard in the background.

Issa Amro, director of the al-Khalil based Youth Against Settlements group told Al-Jazeera, ‘This is the first time we’ve had such a clear video of a Palestinian being executed. This monstrous picture shows how brutal the occupation is.’

An autopsy in Tel Aviv of al-Sharif’s body confirmed that he was still alive right before being shot in the head. Rayan al-Ali, a Palestinian doctor who was present during the autopsy, said: ‘The results of the autopsy were expected. What the whole world saw on the video that documented the shooting was more than enough, but the autopsy results assured it.’

The Israeli military court stated that the video evidence is inconclusive, and the charges of murder have been lessened to manslaughter.

Hundreds of Israelis gathered outside the military courthouse to protest against the arrest of the soldier. According to Buzzilla, a company which specializes in analysing social networks, in a period of just a few days, over 80 per cent of Israelis stood behind the soldier. Petitions and Facebook pages were opened in support of him.

The international community views the killing of al-Sharif differently, and expressed concern that this might not be an isolated incident of a ‘shoot to kill’ policy against suspected Palestinian attackers.

B’Tselem stated: ‘The law on this matter is also clear: shooting to kill is permissible only in cases that a person poses mortal danger to others. However, in at least some of the cases, firing at the assailants did not cease even after they no longer posed any danger. Some were injured and lying motionless on the ground when they were shot dead. In other cases, the very use of live gunfire seems excessive. Soldiers, police and armed civilians are equated to “judge, jury and executioner”.’

‘The shooting of a wounded and incapacitated person, even if they have been involved in an attack, has absolutely no justification and must be prosecuted as a potential war crime,’ said Philip Luther, the Director of the Middle East and North Africa Programme at Amnesty International. ‘While it is encouraging that the soldier in the video has reportedly been suspended and placed under investigation, previous Israeli investigations have failed to hold members of the Israeli forces accountable even when there has been clear evidence of criminal wrongdoing.’

The research of Israeli human rights organization Yesh Din confirms this. Approximately 94 per cent of criminal investigations against Israeli Defense Forces (IDF) soldiers committing acts of violence against Palestinians are closed without indictment, and soldiers who are convicted of a crime receive very light sentences.

The aftermath has not been pleasant. While the nameless soldier received a light sentence, Abu Shamsiyah’s house has been firebombed, and he and his family have received death sentences. International volunteers have offered him protection.