A record number of participants claimed their right to freedom of movement at this year’s marathon. Giedre Steikunaite reports. 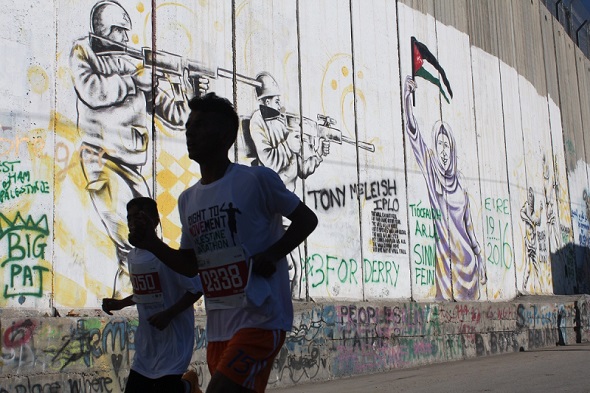 Running past Israel's Apartheid Wall, which separates Bethlehem from Jerusalem and people from their lands.
Photo © Giedre Steikunaite

Bethlehem’s central Manger Square, on regular days a parking lot, dressed up in sports gear on Friday 1 April. Days of rain, harsh winds and temperatures dropping down to single digits that had preceded the weekend were replaced by warm sunshine, as if by special order for the 4,371 registered participants from 64 countries that were to run the 4th Palestine Marathon – or half marathon, or 10k (see, Agenda NI 491).

It had all the elements of a typical marathon: city roads closed to traffic (and certain drivers expressing their unhappiness), photographers on road sides and in the way, field medics on alert; and, later, medals and selfies at the finish line. Bananas, dates, sliced oranges and plastic cups/bottles of water for the runners were also present on the side of the road, as was cheering and clapping and sore feet (yet no serious injuries, according to the ambulance teams). A typical marathon, only here one runs past a several-metre high concrete wall, two refugee camps, military checkpoints and colonized lands.

Since there is no 42.195-kilometre distance in Palestine uninterrupted by Israeli structures of control, the 290 people who signed up for the full marathon had to cover the same loop twice. A pleasant scenery no doubt, but political nevertheless. According to George Zeidan, the Marathon’s co-founder, it borders on black humour: ‘Midway through the race you come to the finish line and you see people running the half-marathon hugging their loved ones… Someone is proud of their wife, someone is proud of their kid, and you think “Shit, I have to do this again.”’ 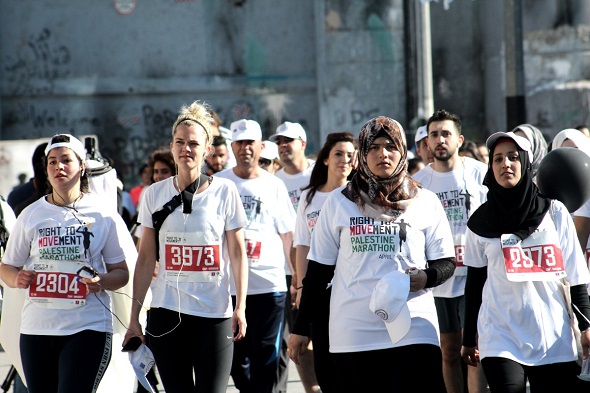 Almost half of the participants were women, a huge achievement given the prevailing social norms that view women running in the streets with patriarchal suspicion.
Photo © Giedre Steikunaite

That is, of course, part of the whole point. The Palestine Marathon is about challenging the Israeli system that restricts the natives’ freedom of movement. It is enshrined in Article 13 of the Universal Declaration of Human Rights, but that matters little when an armed soldier blocks your way. There is the right but not always the option, as the organizers put it. ‘It’s the exact presentation of Palestinian life within one race,’ Zeidan says.

The Palestine Marathon started in 2013 with 687 runners and grew to 4,371 this year. Almost half of the participants are women (45.7%), up from 39% last year. The organizers’ objective for the next two years is 5,000 participants with the same or higher female participation, and running groups all over Palestine. These are an integral part of the larger vision of Right to Movement, a global community of runners, the Marathon’s twin initiative. ‘We run for those and with those who are deprived of that right,’ they say and invite people in their place of residency anywhere in the world to start their own Right to Movement community. ‘It costs nothing except for me to go there, practise, and encourage others to come – and that is making the real difference,’ Zeidan says. In other words, to physically claim what is yours.

This year, in line with the Marathon’s message, Israel denied travel permits to more than 100 runners from Gaza, including last year’s champion and Olympian Nader al-Masri. The distance between Gaza and Bethlehem is not even 100 kilometres, easily covered by car in less than an hour. Similarly, Jerusalem is only 8.57 kilometres away from the Marathon start/finish line in central Bethlehem, yet many participants – spare the internationals – have never been there, thanks to the Israeli-controlled entry for Palestinians.

Back in Bethlehem, Mervin Steenkamp from South Africa finished the full marathon first, at 2:35:26. For several hours afterwards, people stationed at the last 100 metres before the finish line – a hill leading to Manger Square and the Church of Nativity – encouraged each runner with a ‘Yalla, yalla!’ [Arabic for ‘Go!’]. As in, Run, Palestine, run. 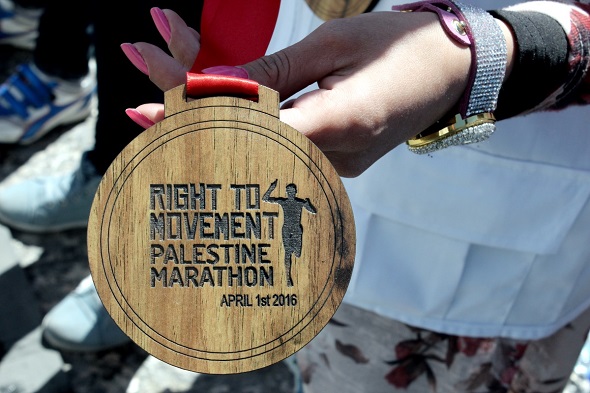 Medals for all participants are made from olive wood. The olive tree in Palestine symbolizes the people's resilience and strong relation to the land.
Photo © Giedre Steikunaite