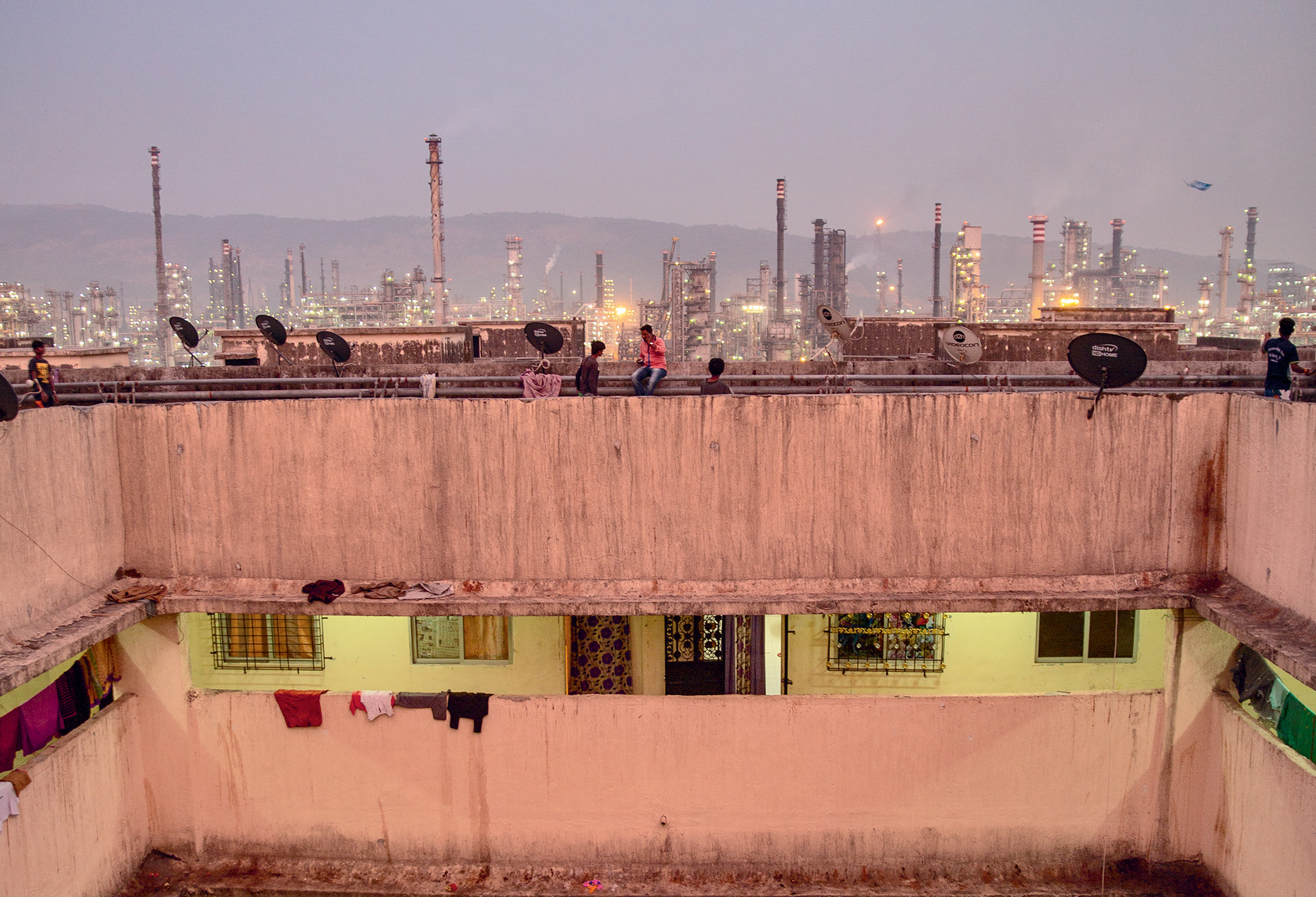 Room with a view: Residents of Mahul’s resettlement colony are forced to live in a polluted industrial area.
Photo: Ishan Tankha

They don’t show it to you in Bollywood movies, the haze. Yet there it is, sure as rent, draped over Mumbai’s skyscrapers.

They don’t tell you about the smell either, but every Mumbaikar knows it in their bones. Raw sewage, Bombay duck (a pungent species of lizardfish) drying in the heat, exhaust from traffic jams in which the average resident spends 11 days of every year, landfill refuse, hazardous chemicals, coriander in the open-air markets... It’s an olfactory overload that could knock a tourist out cold, but sometimes comes back to me in dreams in which I’m on the last local train home, my cheek pressed to the iron window grilles, navigating the city purely by scent.

In 2018, Mumbai was ranked the fourth most polluted megacity in the world by the World Health Organization. But like every other city in India that’s not Delhi, Mumbai’s pollution crisis gets a fraction of the attention, despite being the media and financial capital of India.

It’s as if each megapolis is assigned a part: Delhi chokes, Mumbai drowns, Chennai bakes. With urban centres bursting at their seams, Indian cities are in the process of adding 400 million inhabitants by 2050. Green spaces are dwindling under a constant onslaught of construction and roads are clogged with ever-increasing numbers of vehicles.

Until last year, India’s richest municipality had only two continuous, real-time, air-quality monitors for 20.4 million people. Since June 2019, eight more have gone online with their public data. What these additional monitors hope to track remains hazy. Experts say that they are located in green, leafy neighbourhoods, and not in densely populated ones, giving a false picture of the air breathed by the city’s poorest residents. However, there is now also a growing tide of resistance championing the city’s right to breathe. 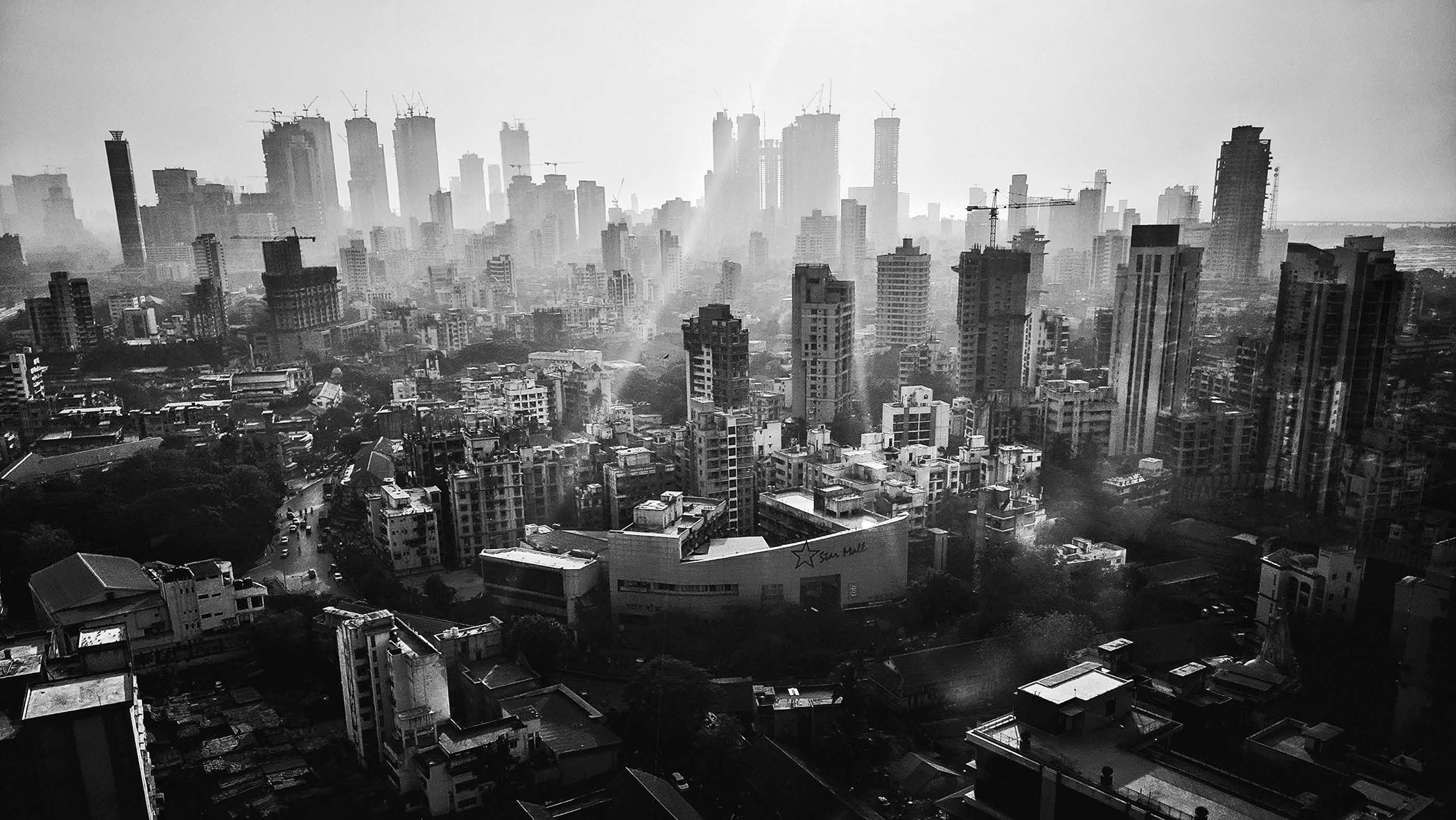 Mumbai is one of the most polluted megacities in the world.
Photo: Nitin Mendekar/Unsplash

Many of Mumbai’s residents have tales of dispossession and dislocation to tell. Among them the people who lived in the eastern heart of the city, on either side of the ancient pipeline bringing water from Tansa Lake, almost 100 kilometres away, to Colaba, the city’s southernmost and richest borough, home to the financial district.

To the city’s courts, corporators and councillors, these marginalized people are squatters and encroachers who posed a threat to Mumbai’s water security and had to be relocated without their consent to the city’s industrial armpit – a heavily polluted suburb called Mahul. Over the years, the number of people pushed to Mahul’s toxic perimeter has reached 60,000.

‘Choti si basti thi, apne sapnon ka mahal (It was a tiny settlement, it was our palace of dreams),’ said 40-year-old Anita Dhole as she watched the last of her colony by the pipeline being razed by a bulldozer two years after the people first started to be relocated. After one year of living in an apartment in Mahul she left to join at least 100 people in an open-air protest camp that had assembled on the footpath on the other side of the road. Flex banners with multiple court orders printed on them swayed in the humid air. A chalkboard signalled that this was the 39th day of the protest. Who would want to subject themselves to this?

‘If we go, we’ll go to a new house,’ said Anita, who is part of Mumbai’s Ghar Bachao Ghar Banao Andolan (Save Homes Make Homes movement), which is fighting mass evictions and trying to stop the poorest residents being pushed further to the edge of the city. ‘Here on the footpath we have clean air, clean water. What do we have there (in Mahul)? They just dumped people there.’

She passed around a thermos of strong tea, before grabbing the microphone and everyone’s attention. ‘Chief Minister, wake up to your conscience,’ she roared, her gold nose pin glinting in the afternoon sun. ‘Wake up, wake up,’ echo 60 women who, like her, have been accused of being threats to the water pipeline. Right here on the street, they lift their saris to show me the dark rashes, boils and blisters that cover their knees and backs, a consequence of the polluted environment in Mahul.

Mahul residents have painstakingly documented over 200 deaths since they were evicted – from cancer, asthma and tuberculosis – while the government counts the number of deaths from the toxic environment as only 88. It’s not like the state didn’t know: a 2013 survey by a government hospital found that over 67 per cent of people who lived in the neighbourhood complained of breathlessness. ‘Hitler sent people to the gas chamber in Germany, that is what the government is doing with the poor in Mahul,’ said Anita.

There is nationwide neglect of the problem. On 6 December 2019, India’s environment minister Prakash Javadekar told parliament that there was no link between air pollution and shorter life spans, in spite of medical journal The Lancet and the WHO projecting deaths attributable to air pollution in India to exceed a million per year. He needn’t have bothered. In recent years, regulations have been increasingly diluted to allow heavily polluting industry to expand without consulting affected people. Eighteen per cent of these industries are yet to set up continuous air-monitoring systems as required by law.

Three mineral and power-producing states that supply cities like Mumbai have only one air-quality monitor publicly reporting data between them. Critically polluted districts, such as where British metal majors Vedanta have its smelting operations, have no public monitoring of their pollution data. It would appear that indigenous communities who live there have different thresholds for their lungs than city residents. None of these industrial towns or zones fall within India’s much-touted National Clean Air Action Plan, which is heavily Delhi-centric. 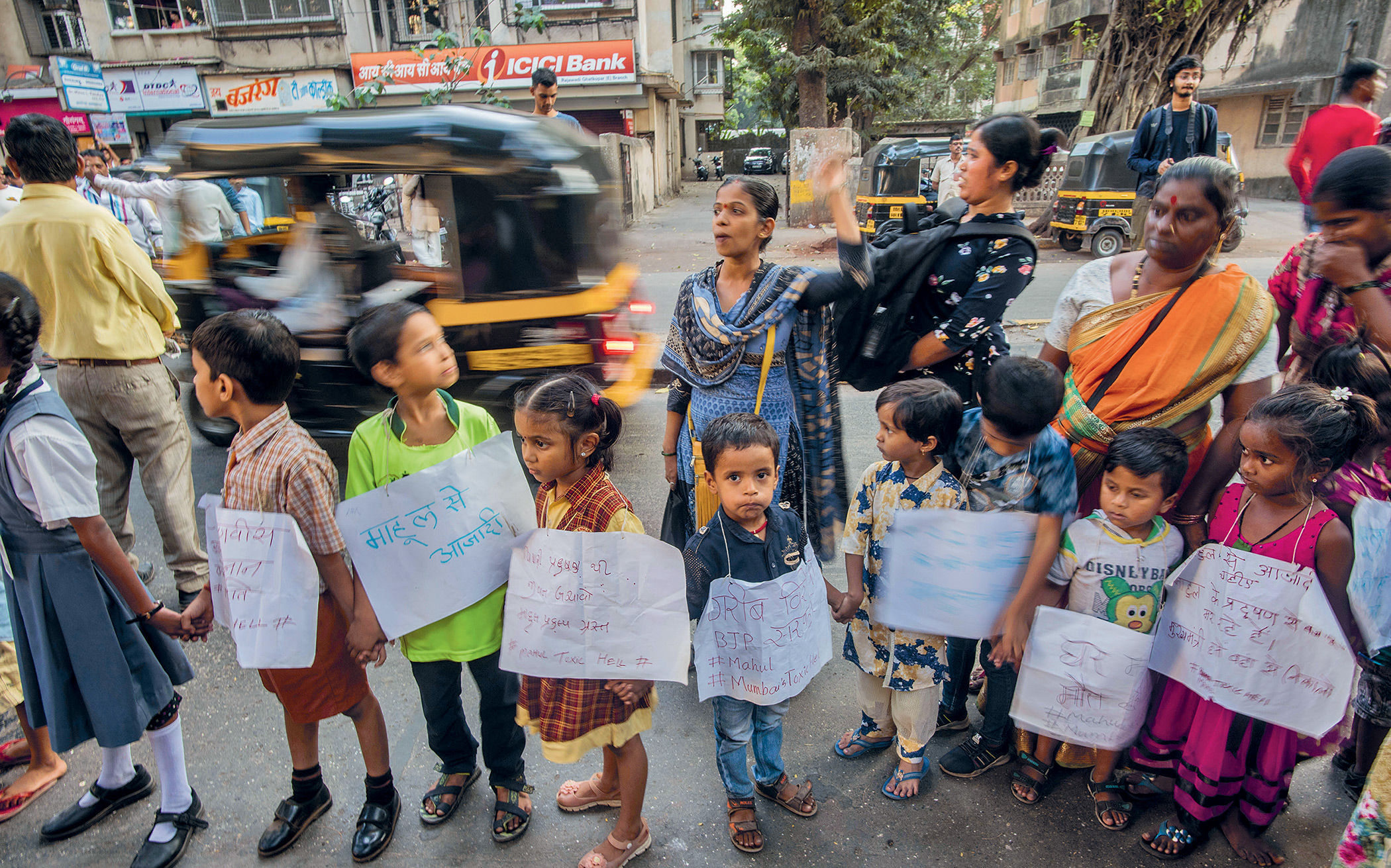 Children join with residents of Mahul to form a human chain as part of an International Human Rights Day protest against the government.
Photo: Pratik Chorge/Hindustan Times via Getty Images

Tankers emblazoned with the words ‘highly flammable’ rumble along the one road leading to the Mahul housing projects, throwing up dust and diesel. Teenagers kitted out in all white, seemingly oblivious to what they’re breathing, practise their run-ups at a cricket academy, surrounded by three oil refineries and a slew of 15 chemical factories.

Matter-of-fact Mumbaikars might argue that the housing on offer in Mahul is not very different from any other provided for the economically marginalized. Block after block of concrete brutalism, packed so tight that sunlight is at a premium.

Tube lights blaze even at noon in the balconies and stairwells that connect eight floors of each block. It’s only when you get right to the top that you see sunlight, and a view of spire after spire of chemical and fertilizer factory chimneys on the horizon turning the air viscous. Young men fly kites on the roof, an unceasing fireball blazing from a petroleum refinery in the backdrop.

‘We were welcomed with fire,’ said Anita. ‘The first day we moved to Mahul, the electricity meter cabin was leaking water and short circuiting. Our building caught fire on the sixth floor.’

Before the elevators were installed, she would climb all eight floors with her limp as she mobilized the campaign to get people out of here. Mahesh Limbachia had to carry his father down four flights of stairs to get him to medical treatment. ‘We were opposed to this from day one,’ said Mahesh. For three months after Mahesh and his family were evicted, they lived at the same protest site as Anita. ‘Then the rains came, kids’ schools started, people’s trust broke in the movement.’

When Mahesh was refused subsidized medication for his father because they had no permanent address as evictees, something snapped. He became Anita’s biggest ally and found an audience with families who were taking loans to pay medical bills, as they had lost their jobs working as domestic helpers in their former neighbourhood.

‘When we started, people used to call us crazy when we went door to door. “Join us or, one by one, we will all be joined in mourning,” I’d tell them.’ Anita points to the massive oil refinery spewing emissions: ‘If there’s a blast here, poora khel khatam (it’s game over)’.

On 8 August 2018, there was a blast in Bharat Petroleum’s refinery that reportedly took place only 18 metres away from some of the buildings, sending glass and soot flying. While at least 43 people were reported injured, the young men on the roof said they saw dead bodies at the factory site.

The blast, and the protests afterwards, shook both people and the media into paying attention to what was going on in Mahul. The campaign managed to rack up several wins, thanks to community legal petitions and persistence. ‘The courts take out time for industrialists’ lawyers; they don’t have time for us,’ said Anita.

The authorities were forced to monitor air quality. What they found was alarming: volatile organic compounds in concentrations beyond all safe limits. Anita and her neighbours were breathing 32 and 7 times the acceptable levels of benzopyrene and nickel, respectively.

To the ire of Mumbaikers rich and poor, the same state government, led by Narendra Modi’s Bharatiya Janata Party, hacked away over 2,000 trees under cover of darkness in the city’s prime Aarey forest in its northern suburbs. Corporate consultants began to join indigenous elders in protest marches and climate strikes, morning joggers stood watch over trees and organized media tours.

The people of Mumbai are resilient but they have had enough. With projections indicating that many parts of the city will go under water by 2030 due to climate-induced sealevel rise, environmental concerns are boiling over. So much so that it is starting to show in their political priorities. The newly elected Shiv Sena state government, a rightwing party that is now in opposition to Modi, has made rehabilitating the people of Mahul a priority and has said that no more forest would fall in Aarey. It has committed to getting a much wider network of pollution monitors online, even if the central government allocation does not allow for it.

Challenges remain in the city-state’s governance structure. Environmental norms are framed by the centre and budgets granted by it. Decentralized environmental governance, of the kind that the international C40 cities’ coalitions have in mind, is hard because city-level governments have little of the decision-making power required.

But if there’s one thing that’s certain: whether it’s the half-million-strong marches against anti-minority laws or the popular climate strikes, the city’s spirit will not be broken, come hellish air or high water. Not without a fight.

Aruna Chandrasekhar is an independent journalist from India who writes about the environment, justice, energy, rights and climate and is currently based at the Environmental Change Institute in Oxford. Her work has appeared in The Guardian, The New York Times and Scroll.in. She tweets @aruna_sekhar

Stop Press: As we went to print, news arrived that the municipal authorities were considering the creation of a Covid-19 quarantine centre at Mahul. Residents said they would oppose it.

‘I don’t want to live like this’
The hidden polluters