Rich Wilson and Claire Mellier explain how citizens’ assemblies have the potential to restart the beating heart of democracy. 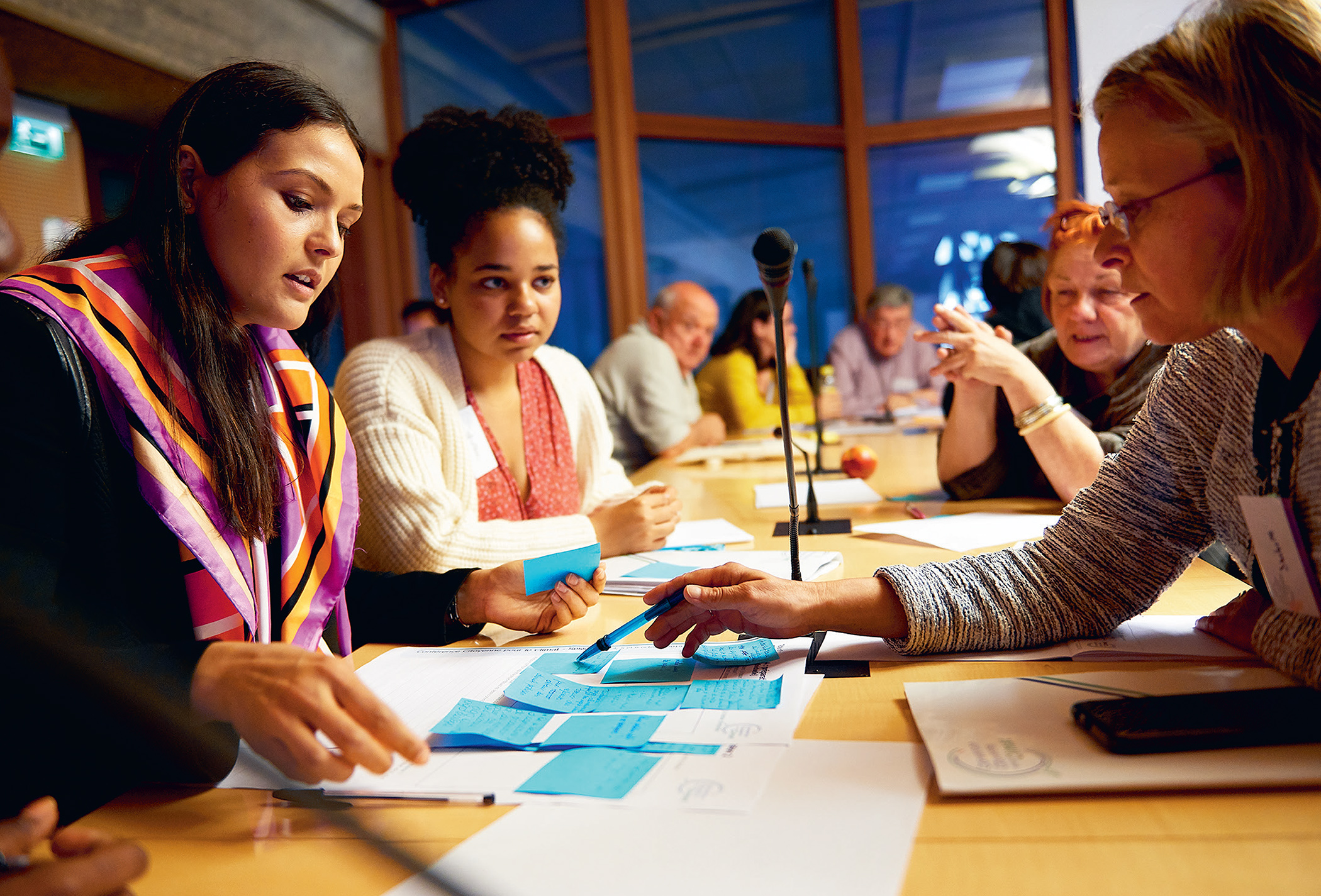 ‘In this time of crisis, we face two particularly important choices. The first is between totalitarian surveillance and citizen empowerment. The second is between nationalist isolation and global solidarity,’ wrote Yuval Noah Harari as the first wave of Covid-19 lockdowns struck.1

We’re guessing Yuval wasn’t thinking about citizens’ assemblies as he wrote that, but we believe these often under-the-radar democratic innovations provide a practical way for us to choose ‘citizen empowerment’ and ‘solidarity’. Here’s how.

In case you’ve not come across citizens’ assemblies, they are gatherings of people (usually 100-150), selected to be a true snapshot of the place in question (say, a country or city) based on demographic criteria such as gender, age, income and education level.2

The citizens are selected by lot, as you would for jury service; and great efforts are made to ensure anyone can participate, such as paying for attendance, providing childcare and improving accessibility for people with disabilities. They usually meet over a number of weekends to discuss a controversial issue of public importance and come up with a set of recommendations for the way forward.

What’s remarkable about citizens’ assemblies is they tend to generate policies far more ambitious than those politicians come up with alone. For instance, the 2020 French climate assembly voted to make ‘ecocide’ crime a law, ban the rent of energy-inefficient housing and ensure all buildings meet strict new environmental standards.3 People also tend to trust citizens’ assemblies much more than they do politicians to act in the public interest.4

Consequently, forms of deliberative democracy like this are becoming increasingly popular to address critical but contentious issues such as waste management in Brazil, constitutional reform in Mongolia, environmental disasters management in Uganda and, famously, abortion in Ireland.5,6,7,8,9

Citizens’ assemblies also provide an antidote to social-media propagated polarization and fake news, generating deep respect and solidarity between citizens with opposing views.10 Louise Caldwell, a participant of Ireland’s Citizens’ Assembly on abortion, relates: ‘I felt empowered and informed – it gave me the language and skills to have difficult discussions. In a room of 100 people, only a handful ever tried to create division or build walls among us. I think most people want to find things to agree on and to discover common ground – through this we can always learn new ways to go forward.’11

The problem is too few people experience these benefits and politicians often ignore the recommendations.

That is changing. The current wave of climate assemblies taking place across the world in places such as the UK, France, Scotland, Denmark and the US are capturing public imagination like never before.

Seventy per cent of French people knew about the Citizen Convention for Climate (CCC) and of those, 62 per cent supported the vast majority of its recommendations.12 This not only generated a powerful mandate for change but sent a shock wave across the whole French political system. President Emmanuel Macron is backpedalling on his promise to put forward the citizens’ recommendations ‘without filter’ to parliament, referendum or executive order. Nearly 500,000 citizens have signed an e-petition demanding that he keep to his word, but some politicians agree with Macron’s hesitancy. We should not be surprised; this would have been the first time a nationally elected leader had delegated so much power to a citizens’ assembly.

We should also not be too disappointed; this is precisely the kind of important, knotty, meaningful public debate that needs to happen in every country about the future of democracy.

It’s going to be messy, renegotiating democracy always is, but that’s a good thing; it’s authoritarianism that represents simplicity and order

The struggle is to expand democracy beyond simply electing politicians to include policy development and implementation as well. It’s going to be messy – renegotiating democracy always is – but that’s a good thing; it’s authoritarianism that represents simplicity and order.

Some have drawn parallels between today’s climate activists and the Suffragettes, due to their use of civil disobedience and the prominence of women campaigners. Fewer have noticed that the climate campaign is morphing into a full-blown democratic movement.

Extinction Rebellion – which has citizens’ assemblies as one of its key demands – is one example. Co-founder Gail Bradbrook said: ‘Extinction Rebellion is beyond a climate campaign; it’s fundamentally a campaign for a functioning democracy because the climate and ecological emergency is a product of our broken democracy.’

Citizens’ assemblies are not a miracle cure, but when done right they can jolt the political system back to life, unblocking and expanding the arteries of political power, getting more of us focused on healing the patient and providing a real experience of other ways of doing democracy. 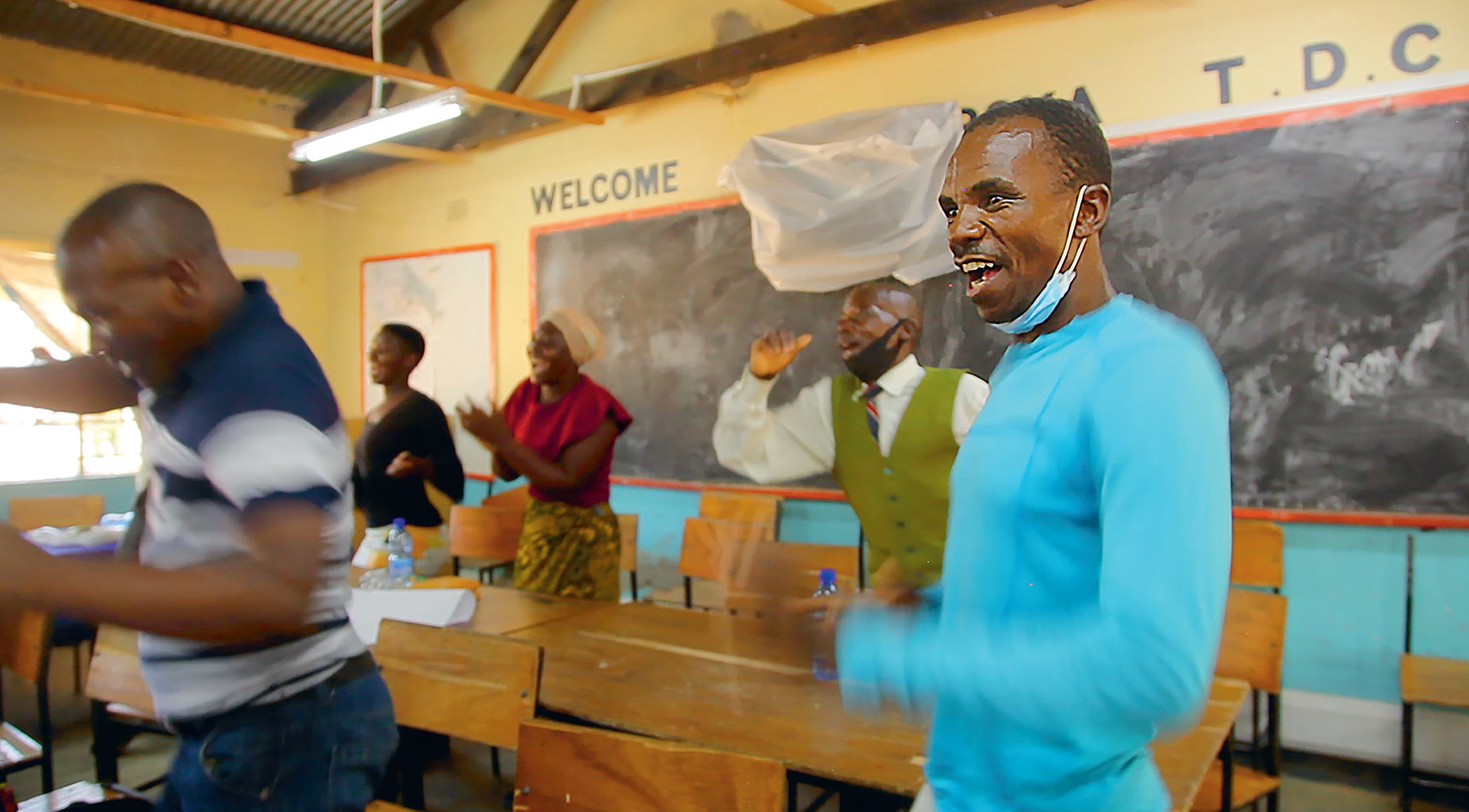 So how can citizens’ assemblies help restart the beating heart of democracy?

First, they need to shift from being low-profile, small events to cultivating mass public debates, explicitly designed to generate mutual understanding between people who disagree. The more people feel part of an assembly, the more solidarity is generated, the harder it is for politicians to ignore them and the more powerful the shock they deliver to the wider political system – as we are seeing in France.

Another way is by encouraging many more people to participate directly in the assembly through events online or in person. These events could be in communities, businesses and schools, anywhere people want to run one.

Local events are a key part of the Global Citizens’ Assembly project.13 Launched in December 2020, this assembly is planned to take place ahead of November’s UN Climate Talks in Glasgow. The heart of the assembly will be a group of people who represent the world’s population as accurately as possible. This means that 60 per cent of participants will come from Asia and 17 per cent from Africa, half will be women, and 70 per cent will be those who earn $10 a day or less.

As organizers our aim is to bring the benefits of citizens’ assemblies to millions of people across the world. It will be the first that anyone on Earth can join, by running or attending a local event. There will be an accompanying wave of cultural activities, ranging from Senegalese rappers to British rock stars, to encourage as many people as possible to participate. The other key challenge faced by citizens’ assemblies is ensuring their recommendations are not ignored. One way is to get guarantees that proposals will go to a referendum, as happened with the assemblies on same-sex marriage and abortion in Ireland. Another is for politicians to commit, in a legally binding form, in advance, to implement citizens’ recommendations, as happened with assemblies on flood defences in Gdańsk, Poland.

If there’s one thing we’ve learnt from 2020 it’s that all our actions matter. We may not want to see autocratic responses to either coronavirus or the climate emergency, but the dark arts of authoritarianism are ready to be deployed should enough people start to believe they are necessary.

Which is one of the reasons why our governance structures need redesigning, to acknowledge and harness the role we all have to play, moving from a top-down, parent-to-child relationship to a more equal adult-to-adult one.

John Stewart Mill argued back in 1859 that the primary purpose of any system of government is to keep citizens safe. It’s clear that democracy today is simply not doing that job.

That’s why we need a new settlement for politicians to share power with citizens on key issues where the former are struggling to keep us safe and where citizens have an active role in any solution.

But until then, there are other things we can do to increase the chances of recommendations being implemented. We can encourage people to campaign on behalf of the recommendations they believe in and we can make sure citizens’ assemblies are presented, by media and government, as important legitimate political chambers in their own right.

That will involve letting go of our pre-conceptions of what democracy looks like and being ready to experiment with what works to solve the big crises we face today – like climate, coronavirus and jobs – while staying focused on what delivers freedom, empowerment and solidarity for more and more people.

This is what we are trying to do with the Global Citizens’ Assembly. We don’t have all the answers; it’s simply our best guess at how to give many more people a voice at the most important UN Climate Conference so far. Our hope is that it becomes a permanent piece of infrastructure that can be continuously improved upon, eventually becoming an integral part of the annual cycle of global events, giving ever more citizens ever more power.

Participant Sumana Nandi from India explains: ‘Usually citizens’ assemblies are initiated by governments or parliaments in a very top-down way, but we, along with many other citizens from across the world, were invited to be part of the design of the Global Citizens’ Assembly right from start. The Global Citizens’ Assembly is the first time someone like me will know they will be heard at a UN climate conference.’

We don’t yet have that new settlement whereby citizens and politicians share power on key issues, so we don’t know what impact Sumana’s voice will have. That’s not surprising as we’ve never before had a way to invite everyone on the planet into the heart of global decision-making and reset the relationship between people and politicians.

By the end of this year, hopefully, that will have changed when for the first time we hear the voice of humanity – and shock waves pass through our global governance systems that might just bring them back to life.

Rich Wilson is a democracy renewal specialist and adviser who has led hundreds of deliberative democracy processes. Claire Mellier is a climate researcher and facilitator who was part of the Climate Assembly UK facilitation team.

How we are gulled
Action & info