Inder Malhotra, writing from Bombay, profiles R.K.Laxman, brilliant cartoonist of the "Times of India", whose insights into India's development struggle are looked forward to by millions every day. The central character of Laxman's cartoons is "The Common Man­the symbol of the average long-suffering Indian who tries to dismiss with a laugh the pom­posity of politicians, the petty tyrannies of bureaucrats, and life's multiplying misfortunes". 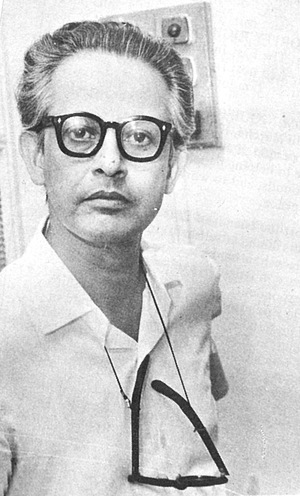 At 48, R.K. Laxman is the finest and foremost political cartoonist in India, perhaps in the world. It is difficult to think of any living cartoonist elsewhere whose work equals his either in the power and maturity of its drawing or in its subtle but stinging humour.

To several millions of his readers, who see his scintillating work in The Times of India, an English daily published from Bombay, Delhi and Ahmedabad, and the allied group of publications, he has already become something of a legend.

Laxman's rise to supremacy in his craft has been swift but by no means easy. In the first place he never had any formal training in the art of drawing. He taught himself drawing and cartooning by the simple device of sketching furiously since as long as he can remember.

Laxman failed in his school leaving examination because he had been busy sketching at the market place while he ought to have been studying hard. As he now recalls, he was "fascinated by the noise and colour of the markets. The milling crowds; the vegetables stacked in neat rows; the customers leaning on their bicycles; and women haggling over the price of brinjals." He drew them all.

By this time, he had started making some money from local newspapers and journals which occasionally published his sketches and drawings. He was also illustrating short stories written by an older brother but more often than not "both the stories and sketches came back with rejection slips." 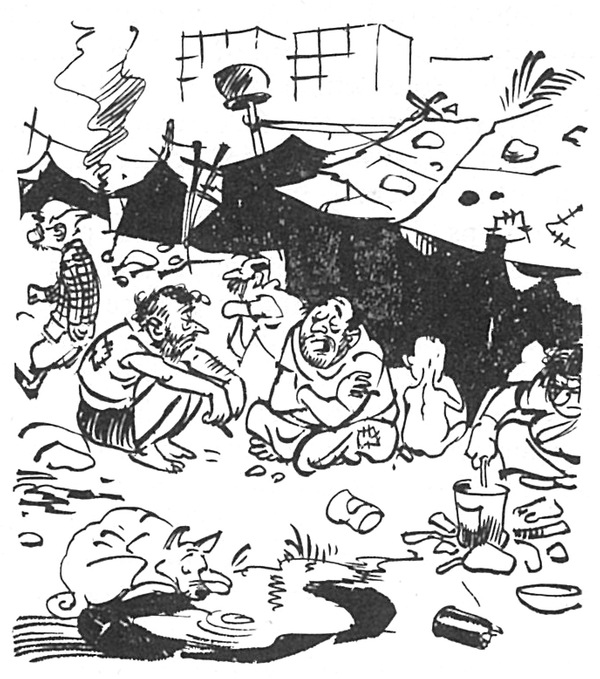 What gives you the impression that we are not? Of course we are an advanced nation - we will soon have TV, satellite ground station, space rocket, nuclear explosion..!

In 1946 Laxman took his degree in Politics, Economics and Philosophy, and made a beeline for Delhi to look for a job as a political cartoonist. He had good reason to go to Delhi rather than to Calcutta or Bombay, the other two centres of newspaper publication. The then doyen of Indian political cartoonists, Shankar, had just walked out on New Delhi's "Hindustan Times", and Laxman shrewdly suspected that it might agree to employing a second cartoonist, in addition to the more experienced Ahmed, whom it had already taken on.

Laxman's guess was correct but his hopes were belied. After he had submitted sample cartoons for a fortnight, Ahmed gave him some elder-brotherly advice: "You're still too young and raw to work in the capital. Find an opening in a provincial paper, work there for some years and only then come back to Delhi."

Laxman's experience with another editor was even more shattering. When he was ushered into the room, the great man was feeling sleepy after a long and presumably convivial lunch. He dismissed Laxman with the terse advice that journalism was a mug's game. "You should find something worthwhile to do."

At this critical juncture Laxman's genius was all but lost to the soulless Indian bureaucracy. But luckily the situation was saved by the bad manners of a petty bureaucrat.

In its last days, the British Raj had launched a campaign to root out malaria. The Health Department needed an artist to draw posters against the menace of mosquitoes. Laxman applied in person with a couple of posters he had drawn almost instantly. They were very good. But the official to whom he reported did not look at them. He was talking on the telephone about a party he had attended the previous evening. Laxman left in sheer disgust.

Bombay was supposed to be only a brief halt on the dejected journey back home. But it is there that Laxman has lived ever since. 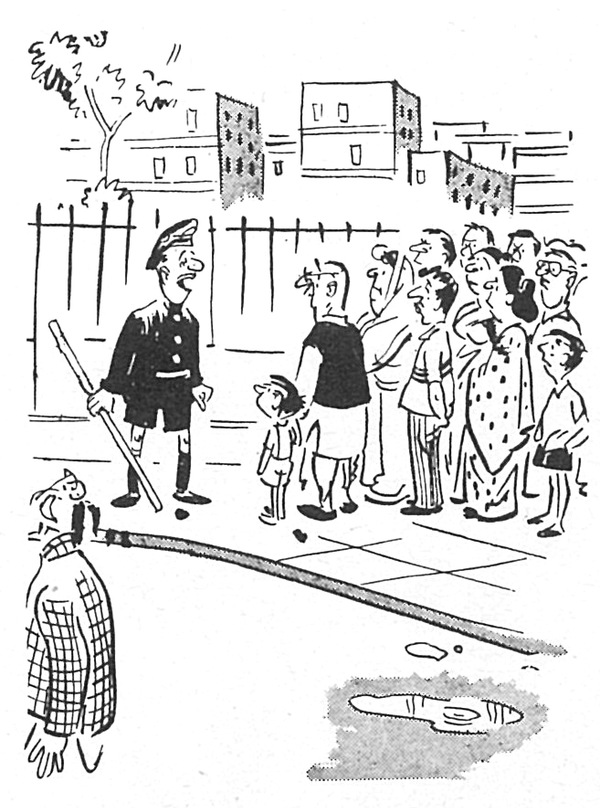 Oh, it's your family! Sorry to have stopped you, Sir. I thought you were leading an unlawful procession!

It was Bombay's "Free Press Journal" which first gave Laxman an opportunity to display his brilliance as a political cartoonist. But ironically his association with it was short-lived. Of course, he was enjoying his work - and the fame that it brought him. But he could not stomach the proprietor's sudden directive to lay off criticism of the Communist Party.

Only after he had come out on the crowded pavement, having handed in his resignation, did he realise that lie had nowhere to go and nothing to do.

"As usual," he recalls, "the local bus service was on strike. So as a gesture of defiance I hired a victoria (hackney cab) and told the driver to take me to The Times of India."

At The Times of India he got a job at once but not as a cartoonist. Indeed, the paper, then under British management, considered political cartoons as something pernicious. Laxman was asked therefore to join another 30 artists whose job it was to illustrate advertisements, posters and short stories. 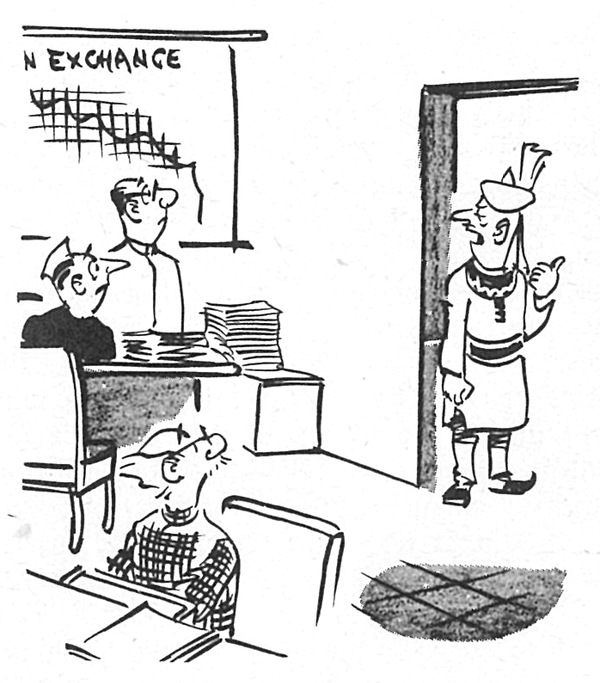 It's only some foreign aid mission members, sir. I told them we wanted to be self-reliant and didn't want to depend on any country and sent them away!

But Laxman insisted on drawing political cartoons, after finishing his allotted work, for personal edification and for eliciting the private opinion of the Editor, Ivor S. Jehu. These were so good, indeed so irresistible, that Jehu broke a 100-year tradition to start publishing Laxman's cartoons.

These were immediately and widely hailed as the best cartoons to appear in India. Laxman's fame grew fast, and he has never looked back since.

Laxman's power as a cartoonist and popularity with his readers took a big leap when, 12 years ago, he created his inimitable character: the common man. This balding, bespectacled, and somewhat bewildered little man in a check coat and dhoti never says a word. But to millions he has become a symbol of the long suffering average Indian who tries to dismiss with a laugh the pomposity of the politicians in power, the petty tyrannies of bureaucrats and life's many ironies and multiplying misfortunes.

Laxman thinks that if he can make his readers laugh he has done his job. "Laughter," he says, "is the only antidote to harsh realities, a protective device bestowed on man by nature, and it is my function to stimulate this protective instinct." 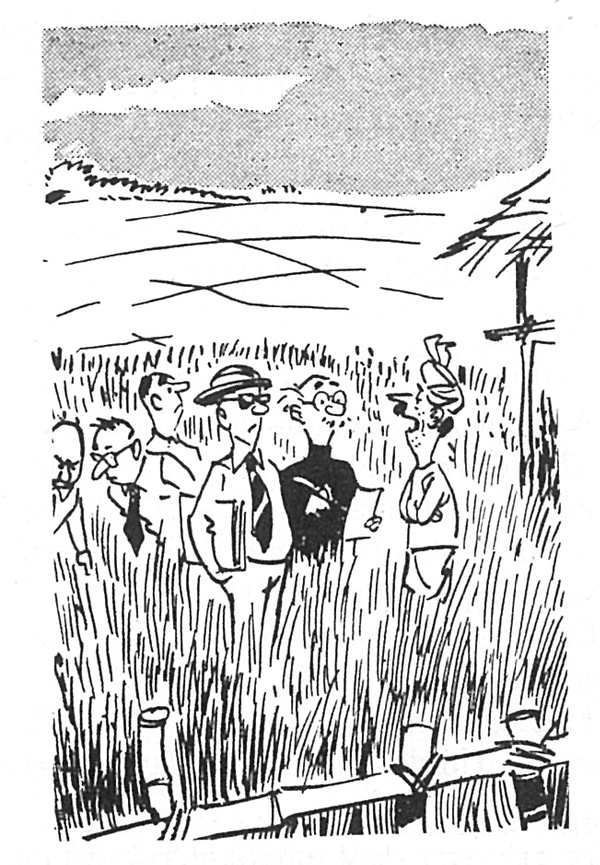 No, sir, it isn't the Japanese or Chinese or Russian method of cultivation - I tried just plain cultivation and it worked!

The world of Laxman's creation is wide and versatile. No subject is too remote or esoteric for him. The agony of Vietnam is grist to his mill as much as the potholes in Bombay's roads. But he firmly believes that "a leaky tap in the bathroom or the price of tomatoes matters more to the people than an avalanche of rhetoric at the U.N. or a shortfall in foreign exchange reserves."

But Laxman is not only prolific; he is also a perfectionist. He never begins to put down on paper any idea unless he has first worked it fully in his head. He never hands in a cartoon, caricature and drawing until he is satisfied with its superlative quality. And yet in 26 years he has never missed what he calls the "Damocles's sword of deadline".

Another reason why he is able to maintain the very high quality is his firm refusal to take his excellence for granted. 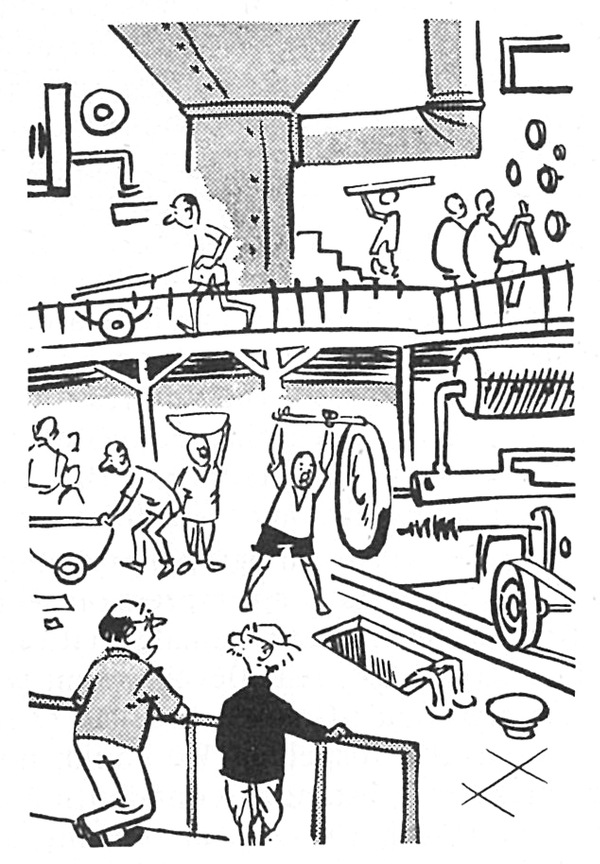 Actually this factory produces nothing. It is just a device to employ labour.

More than the power of his drawing, more than even the freshness of his ideas, what distinguishes Laxman from his peers and makes him unique is his capacity to be biting without even a trace of cruelty or bitterness. He is gentle even to monsters. He never dips his brush in venom or vitriol. Black ink is enough for him. "A healthy irreverence for everybody and everything but malice towards nobody and nothing" is his motto.

This not only makes his work most enjoyable but often enables him to get away with things others might be afraid of saying. Only the other day, for instance, Laxman drew a full-page caricature of Indira Gandhi, highlighting her imperious, Empress-like characteristics. D.F. Karaka, editor of Bombay's ".Current", wrote:

"This cartoon 40 would have sent me to jail / for a three year term if I had drawn it; would give me six months' detention in jail if I were to reproduce it, and would give me at least a month if I were to praise it as the Cartoon of the Year. But it is."

No wonder some of Laxman's most ardent admirers are the targets of his barbs. They pay good money to buy the originals of his cartoons. Mrs. Gandhi's Government itself has honoured Laxman with the award of Padma Bhushan.

Even so, there are occasions when powerful people have taken offence at his inoffensive but hard-hitting cartoons. Even Jawaharlal Nehru once got so enraged that he publicly rebuked him for being frivolous about so serious a subject as five-year plans. 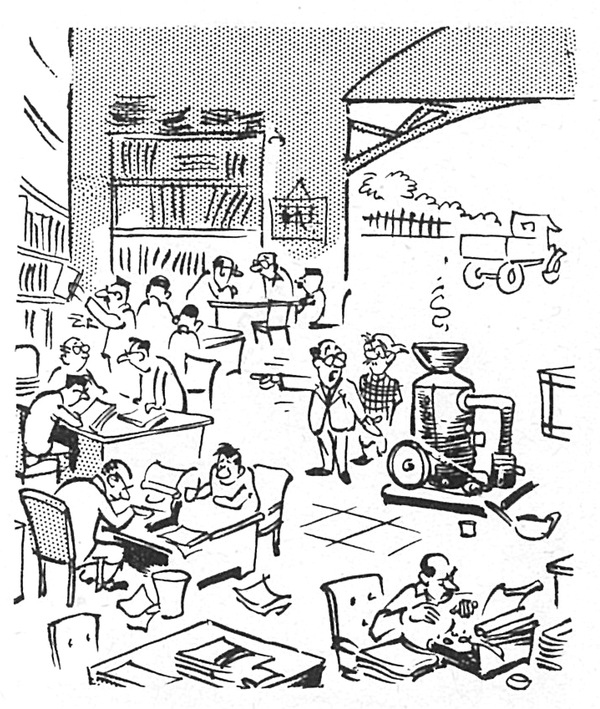 List of items in triplicate, copies of estimate of year's requirements, applications for licenses for imports of materials etc, etc, are all produced there - and this, by the way, is our factory!

This incident did not, however, diminish Nehru's high esteem for Laxman. Meeting the cartoonist once, the Prime Minister asked him why he insisted on drawing him without his Gandhi cap. (Nehru, rather vain about his looks, wore it to hide his baldness).

"Because," Laxman replied, "the cap hides your essential characteristics."

This seems to be a point of great importance to Laxman. According to him, any sketching which does not bring about the essential characteristics of a subject is not worth doing. And to his keen eye many human faces appear to have much in common with animals and even inanimate objects. As a child he got into trouble by sketching a family elder as a goat with a pair of spectacles.

Official condemnation leaves Laxman cold, just as boundless appreciation and lionising by his readers has not turned his head although he is human enough to like being liked. 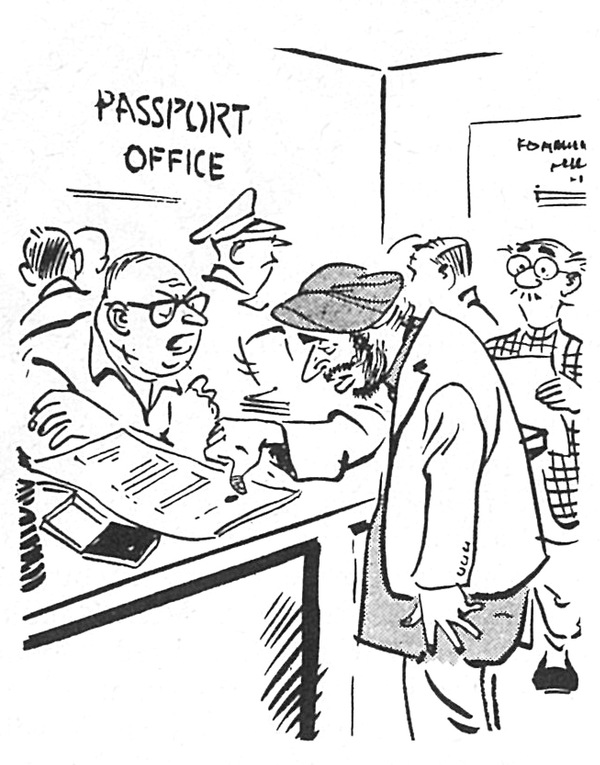 Thanks for signing the papers! You are proceeding to the U.K. to pursue higher studies, did you say?

Sometimes his admirers express their love for Laxman in a manner little short of bizarre. One man wanted him to design his wife's tomb. Another offered him generous remuneration to sketch his Guru meditating in the hills. A lowly railway clerk used to send him a small gift of money every month as a token of respect. The money orders stopped after Laxman made the "mistake" of sending the poor man copies of the four volumes of his selected cartoons that have appeared so far.

To have to choose about 150 cartoons for each publication out of thousands baffles and often annoys Laxman. But the publishers deserve the public's thanks for being persistent.

Has his constant preoccupation with poking fun at the politicians, officials, officious bosses, bragging neighbours, nagging wives and all the rest made Laxman a cynic? By no means. 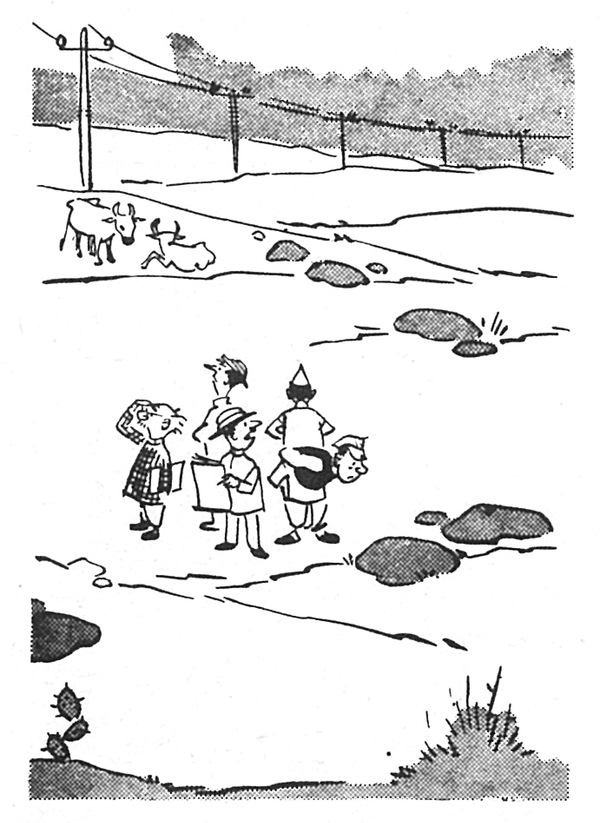 It must be somewhere here! According to our calculations the factory should go into production tomorrow!

Often he has a nightmare that his worst fears have come true, that reality has caught up with his caricatures, and there is nothing more therefore that he can draw.

"But," as he says with his infectious smile, "pessimism, too, has its uses. When things turn out to be not as bad as I had feared, I am very pleased. And if some day my fears are borne out by facts, I will not be taken by surprise."