The Arab Spring bloggers come together (minus the Palestinians)

Ilaria Vecchi reports from the 3rd Arab Bloggers Meeting in Tunisia, where solidarity is key despite the Palestinians being refused entry visas. 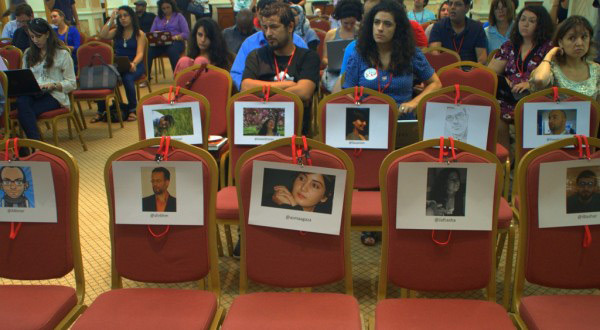 Photo by Ibtihel Zaatouri under a CC Licence

Last time I visited Tunis, it was 1992, Ben Ali was in power, and Monastir was still a small airport. The Internet was just taking off and to buy a ticket to travel to Tunisia you still needed a travel agency. Of that period, I also remember something which surprised me: the reluctance of my mother's friends to talk about politics. Around my home dining table this subject was the main course, it was like bread. In Tunisia, however, people shifted to different arguments. Twenty years - and a revolution - later the situation is completely different.

I sit in the auditorium of the Cité des Sciences in Tunis, where the opening of the 3rd Arab Bloggers Meeting is held. I look around me, excited about what I will be part of for the following three days. Bloggers and internet-savvy activists are taking a workshop on internet security and privacy. These were the people who helped trigger the political revolutions we witnessed this year through their online and offline activism. An important role has been played by Naawat (The Core) a Tunisian bloggers platform, which, together with Global Voices and the Heinrich Boll Foundation, organized this public gathering in a country where just a year ago it would have been impossible.

The atmosphere is one of a family reunion: friendly and open, but with a hint of curiosity about everyone's experiences and contributions to the cyber-world of information. The participants - most of them coming from Northern Africa and the Middle East - have spent years blogging, tweeting or messaging on Facebook about the political and social situation in their own countries.

Many of these guys witnessed first-hand the brutalities and censorship of their governments. The outcome of everyone's experience is reflected in the strong feeling of solidarity permeating the event. This solidarity was evident in the protest by the organizers against the decision by the Tunisian Minister of Interior to deny any Palestinian bloggers entry visas for the event. The first two rows of chairs in the auditorium were virtually empty. In place of our Palestinian colleagues were their photographs or portraits with their twitter names written in bold. They also wrote a press release to gain attention from the mainstream media.

And they were not going to let the Tunisian governments’ actions prevent the Palestinians from giving their presentation. What better way, especially for cyber geeks, to resolve problems and make participation possible if not through a Skype conference? And so the Palestinian contribution was delivered.

The debates included how best to engage and empower people to become active participants in the continuing steps of the Arab Spring, especially during the recent Tunisian elections. How best to shape Tunisia’s constitution is a massive concern for the country in these early stages.

Leaving this three-day meeting I felt hopeful, as this has been an important springboard for bloggers and activists who wanted to meet each other. There were no definitive answers or strategies on how to address internet activism for fostering new democracies but I do not think that was the goal. The point was to further discussions and suggestions on how to keep debates on activism and political engagement alive and rich: something that was most definitely achieved here.