It’s time for John Jordan and Isa Fremeaux to turn their dream into reality.

The land is ours! On the last day of January we cut a cake baked in the shape of the plot, drank bubbly and poured the leftovers on the plum tree we had (illegally) planted last summer as a ritual of hope. In December, the missing landowner finally answered his phone; we met, got him to reduce his price and a month later became the collective owners. Now the real work starts. 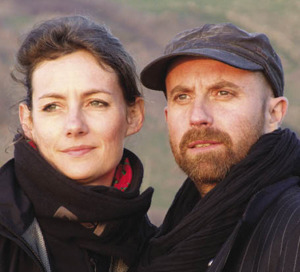 We want to apply the ecological design system of permaculture to our community. Permaculture takes natural ecosystems as models for human habitat. Described as ‘the art of creating beneficial relationships’, it can be applied to everything from the design of a farm to a festival, from running a co-op to planning a political campaign. Natural ecosystems, such as a forest, are energy efficient, resilient, waste free, productive and bursting with diversity. Permaculture suggests that a truly sustainable culture can be created if we understand nature’s principles and mimic them in the way we live our lives.

Key to this is seeing the world as a whole entwined system. In our case, this involves knowing the land intimately: the way the weather and water move over it, listing the species present, scrutinizing our human needs and desires, surveying everything. Basically it’s a question of listening. It’s tempting immediately to start imagining ‘oh, we want a pond there, an orchard here’. Contemporary culture encourages action over contemplation. But in permaculture the emphasis is on protracted observation: some projects spend a year observing before starting their design.

To work with nature and not against it, we need to understand its interconnected patterns, which are best explored with maps. Our next utopian step is months of mapping. Oscar Wilde wrote: ‘A map of the world that does not include Utopia is not worth even glancing at.’ Perhaps if he had been a permaculturist he would have said, ‘Utopians don’t glance at the map of the world, they embed themselves into it’, to which French philosopher Foucault might have added ‘but a tiny patch of land... is also the world’.