The Boy Bands Have Won

A yowl of fury against the Pop Idol-type mediocrity that seems so often to fuel cultural commerce these days. 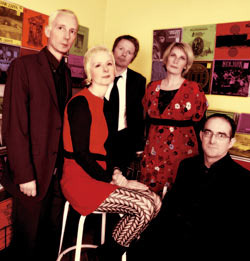 Actually, the title to The Boy Bands Have Won is at least 100 words longer than what fits on the cover of Chumbawumba’s latest album, but let’s just say that it is a yowl of fury against the Pop Idol-type mediocrity that seems so often to fuel cultural commerce these days. The Chumbas, self-proclaimed Dickensian cultural pickpockets, are one of Britain’s original agitprop bands, but unlike harder edged fellow travellers such as Crass, there’s nothing really scary about this Leeds collective. In fact the Chumbas reveal themselves here as purveyors of modern folk songs finely wrought in a traditional mould.

Chumbawumba have assembled a decent guest list for The Boy Bands (the Oyster Band and Jim Boyes and Robb Johnson included), but in essence, it’s a slimmed-down acoustic line-up that’s presented here. The readiness to confront wrongs in all forms remains the same – it’s just updated. So there’s a sardonic ballad for the MySpace generation (‘Add Me’), one about Margaret Thatcher (‘Bury Me Deep’) and another about Gary Tyler, an innocent man on death row in Louisiana for 30 years and still counting. Musically, this is pleasurable, proficient stuff – punchy and catchy with winsome vocals from Lou Watts and, on ‘RIP RP’, a hymnal farewell to the tyrannies of received pronunciation. Also recommended is the band’s well-organized website, filled with lyrics and videos – including the irrepressible ‘Homophobia’ from the early 1990s. I’d defy anyone to resist the pleasures of those all-singing, all-dancing nuns.

Three and Out
My Grandmother – A memoir
Back