Colossus in the sun

Egypt’s rising food prices have hit the headlines. Maria Golia steps back and looks at how the process of provision itself is undergoing headlong change. 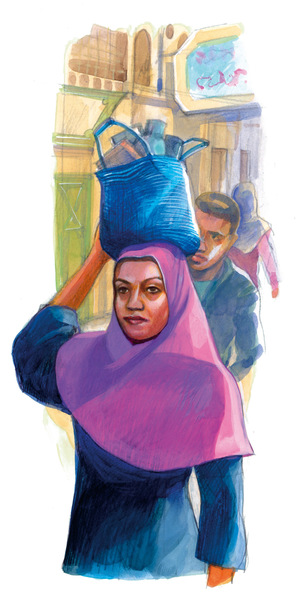 I recently had an appointment in a place called New Maadi, south of Cairo, more an extension of the city than a town or suburb. I hadn’t been down the road that leads there in a while. It passes through the City of the Dead, Cairo’s millennial cemetery which actually has a burgeoning living population, a shanty town amidst the tombs. But aside from the informal housing that has sprouted everywhere, the capital’s perimeters are expanding at a speed that defies belief. New Maadi barely existed 10 years ago, nor did the tight rows of highrise apartment buildings standing shoulder to shoulder against the desert that uninterruptedly lined the road.

Arriving at my destination, I had more cause for astonishment. There, at a knot in several under-construction highways, was a massive supermarket, one of a well-known international chain. While I’d heard that this franchise had come to town, I was unprepared for its sheer size. Since the person I was meeting lived just behind it, I figured going through would be easier than going around, so I stepped inside the cavernous air-conditioned space, which was nearly empty at around noon. It was in a shopping mall carrying local and international brand-name stores, in addition to the mega-supermarket, where an endless row of cashiers quietly awaited customers. It struck me they were better equipped to handle crowds here than at Cairo’s International Airport.

I made my way through and left by an emergency exit, only to find myself in a loading dock, abuzz with the arrival of refrigerated trucks. Crossing it, I located my destination, climbed the stairs and rang the bell, but no-one was at home. I went back down, sat in the doorway, and watched the comings and goings of food, reflecting on how the process of provision had vastly altered in what seemed a very short time.

Shopping in Cairo has always been an adventure, since it ordinarily involves dozens of direct human contacts, and mostly takes place in the street. Sidewalk fruit, vegetable and bread vendors each have separate establishments, sometimes no more than a few crates turned upside down on the ground that serve as tables to present their goods. Although they provide a valuable service, the police plague these food sellers, raiding them and issuing fines, leaving them no choice but to go underground. With policemen hovering nearby, lettuce and loaves of bread change hands in alleys or behind cars like contraband.

Aside from the neighbourhood vendors, each city block has several grocers, their shelves stocked with identical items. There is no pretence of competition; prices are fairly uniform and supplying basic staples is the primary aim. Most grocers and food sellers extend free credit to their customers, who pay periodically as they can. Many food items are packaged or sliced by hand, providing a personal touch and sometimes fingerprints. This familiarity is to be expected in a city where dozens of passers-by share the same clay jugs of drinking water, set on sidewalk racks by shop owners who wet them throughout the day to keep them cool.

It was approaching one o’clock, the sun was fierce, and my appointment still hadn’t arrived. I was about to leave, when a woman in traditional dress walked by, trailing several children. On her head she carried not the usual basket or box, but a plastic bag from the supermarket, bulging with sundries. There was no attempt to pile the things in the bag carefully. It was just filled and popped atop her head where it obediently rested as if under some kind of spell.

In the cab driving home, I lost count of the buildings running into the distance, shimmering mirage-like in the heat. Along the road I saw a few seedling trees and palms struggling to establish roots. Even if they survived, it would be a long while before anyone would enjoy their shade.

I remembered when I first came to Cairo. It was back in the pre-Tetrapak days, when milk sellers went from building to building, their aluminium canisters slung over the sides of a donkey or bicycle. They mounted any number of stairs to deliver milk to those of us, mostly women, who awaited them with empty pots. From the door you went straight to the stove to boil the milk, until the cream rose to the top and you figured all the bacteria were gone. It came from water buffalo and it tasted like grass.

Maria Golia also writes for The Middle East, reviews for the Times Literary Supplement and is the author of the non-fiction Cairo, City of Sand (Reaktion Books, 2004).

Standing up to the State
Elie Wiesel (born 1928)
Back