Praise, blame and all points in between? Your feedback published in the April 2015 magazine. 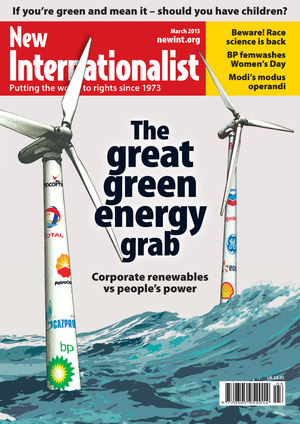 Thank you for the March edition (NI 480) – we have to exploit Green Energy and do it in an equitable manner.

Of particular interest to me was the article by Hamza Hamouchene on Desertec. Recently, I supervised a project regarding this topic for a remote area of Libya and this shows how difficult the technology of Desertec really is! The vast amounts of solar energy must be stored and hydrogen gas was the chosen route. However, water, from which the hydrogen is derived, is an extremely precious commodity in the desert regions of North Africa so for any solar installation this will be a continuing problem to surmount.

The work was carried out over a period which included Qadafi’s downfall and a degree of optimism pervaded the country. How sad that chaos is now reigning. As scientists/engineers, we can use reason with difficult technological projects but factoring in unstable politics is not amenable to rational thought. Desertec will unfortunately remain a dream rather than a reality in many parts of the Arab World.

Juan Carlos Chirgwin (Letters, NI 480) has some valid grievances about state terrorism but ruins his argument by outrageously blaming Charlie Hebdo for ‘permitting’ Western state violence by baiting Islamic fundamentalists.
The massacre of the journal­ists is entirely the responsibility of the perpetrators and not of those who exercise the universal right of free speech.
Free speech means nothing if it cannot be used for causing offence.

Those who express themselves only with words and pictures cannot be blamed for ‘baiting’ their killers. That sounds worryingly like blaming women for baiting rapists by their choice of clothes.

Juan Carlos Chirgwin seems to be blaming the victims for exercising their right to free speech and so provoking their attackers and then causing a state clampdown on free speech. I urge people to irreverence in the face of authority, however offensive. This is a key way of holding authority to account and making sure those in power do not rely on excessive deference to get away with their self-serving practices. 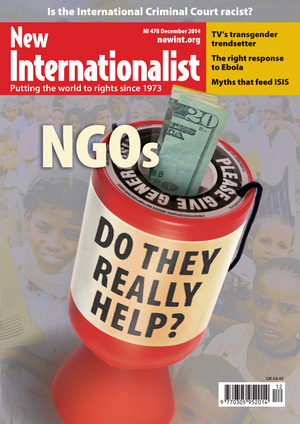 I have been a subscriber for over 30 years. My main reason has been the magazine’s bias towards the Majority World in which I have lived all my adult life. It was therefore a disappointment to read NI 479. Your figures show that 79 per cent of Africans and 68 per cent of Asians have no internet coverage. In my own home country of Malawi the figure is 86 per cent.

Despite this lack of cover for billions of people, your editorial states that ‘it has never been easier to engage and interact’ – it is not clear how this applies to all those without access to the internet or to rural dwellers like myself who have access but normally need 15 minutes to download one megabyte. Your Big Story leader claims ‘We have the library of Alexandria at our fingertips’ and that ‘we have never been connected as we are today’. This ‘we’ certainly does not refer to the Majority World.

Internet access is linked to the availability of dependable electricity and there are now some 3.2 billion people who have no such access. That figure is set to grow over the next decade as the rate of population growth exceeds the development of new generating capacity, particularly in Africa.

Having dedicated an issue to the challenges facing the wealthier section of our human family, might we have some attention paid to the communication needs of those who have no access to the internet and are unlikely to do so for many years to come?

Seeing through the void

At last – someone saying something sensible about ‘radicalization’ (Essay, NI 478)! It is for this blend of intelligence and insight that I subscribe to NI.

People are radicalized when their most deeply held values are trampled on by others. We appear to be genetically programmed to want ‘fairness’ – children everywhere are quick to spot, and complain about, unfairness. Young people everywhere also want the world in which they are going to live their lives to be fair. Why should they not? They are going to spend their next 50, 60, 70, 80 years in it.

Now nearly 65, I find that I am radicalized by the egregiously and increasingly shameless greedy and dishonest behaviour I have witnessed in our society’s ‘leaders’ (politicians, bankers, FTSE company directors, MDs of large public institutions) over the last few decades. Perhaps our ‘leaders’ fear less the ‘radicalized’ youth than the fact that the ‘radicalized’ youth has seen through them and the ‘void at the core’ of what they offer.

While there are people determined to follow the guidance of a moral compass, there is some hope. The really dangerous people are those who think the moral compass is followed only by fools.

I agree the ICC is not racist (Argument, NI 478), but I will not be happy until Bush and Blair are taken to The Hague for war crimes, based on the misery and dislocations caused by their wishing to steal Iraq’s oil.

I have recently subscribed to your magazine, having for the last two years wondered why my local barman is such a measured font of knowledge and oracle for all things humanitarian throughout the world, be it favela, slum, shebeen, neighbourhood bar, speakeasy. Keep up the good work, loving your informed news in the Emerald Isle.

Ending corporate rule
When a sanctuary is a prison
Back