Praise, blame and all points in between? Your feedback published in the June 2015 magazine. 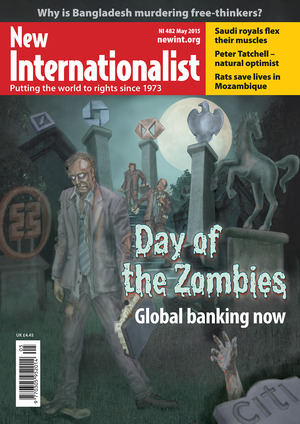 The issue on global banking (NI 482) was informative, but it was unfortunate that David Ransom’s article repeated the myth that banks can create credit and print money. This cannot possibly be true: if it were the case, banks would never go bust or need any kind of government bail-out.

Perhaps the shorthand ‘print’ accounts for some of the difficulty.

The money we’re talking about is not literally ‘printed’ but electronic credit created by private banks in huge multiples of their capital, over and above what they hold on deposit. While they can and do lend to each other, they cannot lend to themselves.

Insofar as the process is regulated, governments are indeed implicated. In effect, bailouts – and quantitative easing – replace the money created and lost by the banks, primarily to forestall a ‘run’ by depositors, leaving the creation of credit in private hands. Hence the meagre attempts thus far to increase the ‘capital ratio’ of private banks and thereby reduce the risk of public bailouts in future. The banks resist this because it reduces their potential profitability, which relates to the size of their capital.

Your Agenda article on the Leviathan Gas field (NI 482) and the opposition to its development was interesting. I understand bank funding is a problem as well. More concerning is the opposition by Israel and in time the US Republicans to the proposed agreement with Iran over the nuclear power/weapons issue. One cannot help but think that behind a lot of the opposition to the nuclear power issue with Iran are vested commercial interests. Iran sits on huge reserves of both oil and gas and, with low prices on the world market presently, additional supply at this time certainly would not assist the Leviathan development.

I’m saddened to see that even those commenting critically on the race science article (NI 480, Letters NI 482) still seem to treat IQ as a given. Some of us engaged in educational research were pointing out in the 1970s the objections to this concept. Firstly, coincidence is no proof of causation – just because an IQ result correlates highly with a given social or ethnic status doesn’t mean that a high or low result is the result of that status. There could be a myriad of other explanations. Secondly, and equally fundamentally: IQ test results are a circular process. What IQ tests test is the ability do well at IQ tests. They tell us nothing whatever about ‘intelligence’, however defined. ‘IQ’ is another of those classic myths.

Jason Louv’s excellent article (‘Towards an understanding of the psychopathology of patient Monsanto’, NI 481) is introduced with the words: ‘It is said that if a modern, successful corporation were a type of person, it would be a psychopath.’ Has a bit of a biblical ring. But credit where credit’s due: that modified meme (modern and successful are not criteria) was originated by law professor and author Joel Bakan in his book The Corporation: The Pathological Pursuit of Profit and Power and popularized in the feature documentary and three-part TV series The Corporation which Bakan wrote, and I co-directed with Jennifer Abbott in 2003. The film was – and still is – Canada’s all-time, top-grossing feature documentary.

Re: ‘The People vs Monsanto’ (NI 481). These farmers and the common person fighting Monsanto’s ignorance and fear campaign need our ongoing support. They are the frontline heroes. Any billionaires out there willing to help?

Like most people, I am disgusted by the violence perpetrated against the offices and employees of Charlie Hebdo... but I am not entirely surprised. Indeed, why in the present world climate, should anyone be surprised? It is not enough to hide behind the cries of democracy and freedom of speech – which many of us enjoy but not everyone, contrary to the claim made by Brian Quinn in his letter (NI 481) – as these are concepts that are alien to some people and cultures. I am most certainly not an apologist for any terrorist or group seeking to justify violence.

Quinn is also wrong to claim that ‘Free speech means nothing if it cannot be used for causing offence’ as is Mark Holton in his letter (NI 481) when he blandly encourages people to be irreverent, ‘…however offensive’. Since when have people been justified in ridiculing, insulting and attacking someone else’s beliefs and value systems and thinking that they can do this with impunity? What right do people have to do this? At what point does satire become hate-speech? Surely it is this belligerent approach to other people’s values, this total disregard for other people’s feelings that can push some extreme people ‘over the edge’?

With democracy and democratic free speech comes responsibility, and some people are of the view that this includes not placing people in harm’s way. We cannot hide behind the claim that it is simply satire and if you do not share in the humour, you are somehow devoid of jocularity as well as being intellectually lacking; the concept of irony is not understood in many cultures. If indeed this is so, then we all share some responsibility towards internationalism, democracy and diplomacy, including journalists and editorial teams. If we believe that we can say and do whatever we wish because we ‘believe in democracy’ then this smacks of Western hegemony of a kind that has led us into Iraq twice in recent history, and produced a level of political and cultural global discord that makes all our lives much less safe.

Something to Marvel at

While re-reading NI 480, I noted the passing reference that Elon Musk was the ‘inspiration for Tony Stark in the Iron Man films’. As a long-time Marvel comic tragic I should point out that the Iron Man/Tony Stark character appeared in 1963, almost 10 years before Elon Musk was born.

Arguably, Tony Stark may in fact have been the inspiration for ‘playboy millionaire’ Elon Musk.

Re: ‘Race science rears its ugly head’ (NI 480). As globalization snowballs into the future, it amazes me that this is still even a thing. To associate diseases to genetic mutation can help us to better help our fellow man. However, to extrapolate this to something so intangible as intelligence, especially based on socially biased testing as IQ, is disturbing. To add insult to injury the academic community is simply looking the other way, ignoring inherent flaws in such inflammatory research. How long will this junk science last?

A sharp kick in the ballots
Letter from Bangui: The school of hard knocks
Back