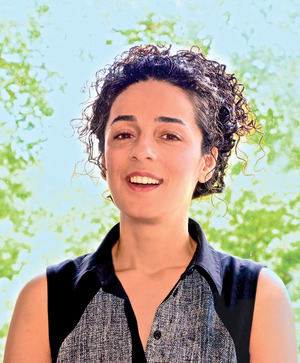 It has taken just one year for the Facebook-fuelled ‘My Stealthy Freedom’ campaign, spearheaded by exiled Iranian journalist Masih Alinejad, to attract nearly a million likes and the international recognition of a human rights award from the Geneva Summit for Human Rights and Democracy.

Aimed at reversing the compulsory hijab law in Iran which forces women to wear headscarves, it began with the simple act of Alinejad posting on her Facebook page a bare-headed picture of herself in the streets of London, with the comment: ‘Every time I run and feel the wind in my hair it reminds me of the time when my hair was a hostage in the hands of the Iranian government.’

The response was massive: an outpouring from women in Iran lamenting the freedom Alinejad now enjoyed. So she posted another picture of herself, this time inside Iran without a headscarf, and has since been ‘bombarded’ with pictures and videos from Iranian women following suit.

So far, the women have not faced any serious repercussions. The government has attacked Alinejad on state TV – saying that she was raped because she wasn’t wearing a headscarf, that she is not a good person, she’s anti-revolutionary, she is supported by Western governments – and attempted sabotage by hacking Facebook accounts to post fake pro-hijab photos and comments. But they have not been able to arrest her and halt the campaign.

As Iranian gender equality activist Soudeh Rad commented: ‘[this] brave act, generated from the grassroots, is the persistence of people to gather around one specific demand.’

In fact, the momentum continues to build, as women are now sharing in more detail how the compulsory hijab affects their daily lives.

Last year, 3.6 million women were warned in the streets about their hair and clothing by the morality police. One woman recounts how her daughter jumped into the road when she had to let go of her hand to fix her headscarf in the wind; another explains her dilemma at having to remove her clothes and headscarf when faced with jumping into a river to save her daughter.

Alinejad can relate to these stories. Coming from a religious and traditional rural family, she was forced to wear the veil at all times from childhood. In fact, she is the first woman in several generations of her family to expose her hair in public.

‘My relationship with the veil was complicated; it became a part of my identity, and it was not that easy to take off. I had to fight with everybody [and] I was worried about people’s judgement. I didn’t want to break my mother’s heart. The hijab can be a sign of honour in the family.’

The internalized shame remained with her even after she left Iran. Alinejad recalls the first time she appeared on television (on US federal government broadcaster Voice of America) without her hair covered, in 2011. ‘I’ll never forget that day. When I left the studio, I called my brother. He said, “you have been living so long for the good name of your family but how about yourself?” Yes, I got a lot of complaints from my mother, but that was when I started to be myself on TV.’

Iranian women have been living with the compulsory hijab for more than 30 years, so why the rebellion now?

In a country where all media is state-owned, Alinejad believes that ‘through social media you cannot hide the other face of Iran. [It is] giving a platform to people who have never had a serious debate about their rights.’ This includes those women who choose to wear a hijab but disagree with its compulsory nature, due to the tensions it causes in society. And those men who feel insulted by the state’s claims that their lack of self-control means women must cover up.

After an appeal to men also to don the headscarf as a sign of solidarity with women, many have responded with pictures, widening the pressure base. ‘If more and more men join us, the government cannot keep us silent,’ says Alinejad.

Having broken her own silence with her novel Taje-e-Khar (Crown of Thorns) in which she writes about her private life, her long-term goal is now ‘to bring all secrets into the media… empowering [Iranian] women to talk about everything they shouldn’t talk about – their body, their identity, themselves. When any individual woman has got the power to talk about herself, then no-one can hide her, no-one can oppress her or force her to be someone else.’

Visit My Stealthy Freedom at Facebook.com/StealthyFreedom.

Lucinda Homa Gray is an Anglo-Iranian journalist from London living in Seattle. You can find links to her articles at lucindahgray.com.

The delicious taste of irony
And Finally... Susana Baca