Praise, blame and all points in between? Your feedback published in the September 2015 magazine. 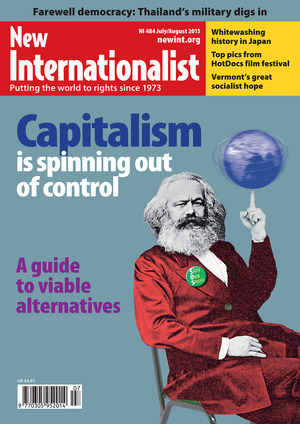 What’s in a name

There is indeed an alternative to capitalism (NI 484).

This would involve extending the idea of the commons and making the resources of the planet the common property of all the people. Organizing production to satisfy people’s needs. A true world community without classes or rulers or government. No prices, no wages, but free access to goods and services. A framework within which environmental issues and ideas of ‘degrowth’ can be decided on democratically.

It doesn’t matter whether this is called Socialism or Communism (or even Anarchism). But it’s the only practical alternative to keeping wages and profits, which would mean keeping capitalism.

The Left seems to be succumbing to the myth that all humanity’s ills originate in capitalism. Rid ourselves of this troublesome system and an equitable and sustainable world awaits. Simplistic solutions are always seductive, and capitalism makes an excellent scapegoat, but even though getting rid of it may be a good thing, the root problem isn’t capitalism. It’s people.

People want stuff. They want a nice car and nice clothes. They want a computer, a TV and an iPhone. They want tropical foods and tropical vacations. And they want capitalism because no economic system has ever surpassed it at providing the wealth necessary to buy lots of stuff, or produced so much stuff with such relentless efficiency.

The great challenges facing humanity can be met and overcome without trashing capitalism. Consider what Western society has accomplished in the last 250 years. We have ended slavery, enfranchised whole populations, emancipated women, and established universal education and medical care. Each of these is a magnificent achievement in itself, rarely if ever achieved in all previous history, and all were achieved compatibly with capitalism.

If all these things could be achieved alongside capitalism, so can the problems we face today. This will involve convincing a critical mass of citizens of the seriousness of the problems, as well as weaning them off consumerism – the opiate of the people. That might be the greatest challenge of all.

Congratulations on NI 484. The only surprising omission was that there was no mention of population in the crisis that we face. Most of the assumptions that the global economy is based on can be traced to the Enlightenment, the most crucial of these being that nature is infinite and need not be included in price calculations. For a global population of around 500 million, this was a workable solution to a difficult problem. Any resource availability calculation would maybe have suggested it was 500 years before things ran out – not a pressing problem. With a population of 7 billion that very same resource would last just over 35 years. The cohort that must solve this issue is roaming the planet now and the one that is in power must recognize that time is fast running out. While ‘What should we stand for?’ provided some excellent principles, the fundamental problem is quite simple: we need to reinvent the economy to reward activities that nourish the future rather than those that destroy it.

I was surprised at your silence on the fundamentalisms of the third Abrahamic faith (NI 483). I am not sure why you decided not to cover this aspect. Similarly for Buddhism. The disproportionate coverage of Islam raises questions. Kindly display a sense of balance.

Congratulations to Robert Parenteau on his exposure of the fundamentalist nature of neoliberal economics (NI 483). The lack of recognition that this is a belief system means the debate has been closed down. Standing as Green Party candidate at the General Election, we panel members on the local BBC Question Time were asked by the political commentator: ‘Do we have a moral responsibility to balance the books?’ I responded that I had not considered bookkeeping to be a moral issue apart from the obvious prohibition against dishonesty. I pointed out that homelessness and hundreds of thousands of people relying on food banks in the sixth-richest country in the world seemed far more immoral and worthy of consideration.

We need to change the neoliberal narrative, not join it. Telling stories like Parenteau does is far better than accepting the language of the dominant economic belief system. Church leaders have started to tell the story from a different viewpoint. Now we need politicians who are willing to do so.

It is simplistic and unhelpful to associate fundamentalism so closely with religion, as was done in NI 483. We all have beliefs and values that affect our decisions and behaviour, and it is foolish to think that only religiously inspired values can be damaging.

If fundamentalism means believing that society as a whole should be forced to live according to your values, and vilifying those who disagree with you, then some atheists, feminists, greenies and political supporters would be classified as fundamentalist. This kind of ‘fundamentalism’ is, I believe, unhelpful – whatever the cause being advanced.

The world needs people who are passionately committed to what they believe and who are prepared to make sacrifices in order to put those beliefs into practice and defend them. Open-mindedness and tolerance are not incompatible with passionately holding on to distinct values and beliefs. It is not the strength of opinion that makes one a fundamentalist, but an unwillingness to treat with respect those with whom one disagrees. Unfortunately, that characteristic can be found even among those who are vehemently secularist.

Re Agenda article ‘Cementing Gaza’s suffering’ (NI 483): brilliant; however, it piqued me that Operation Protective Edge was referred to as a ‘51-day war’.

Unfortunately 72 Israelis lost their lives but this must be contrasted with 2,220 Palestinians who died, according to the UN, the majority of whom were civilians.

If a child slaps me and I then run that child over with my car I can hardly say I had been in a ‘fight’. Likewise Operation Protective Edge was not a ‘war’.

In defence of anger
Letter from Bangui: Breaking down
Back