‘I love you, and you love 20 million people’

Yara Badr, Darwish’s wife, says she always knew she’d have to share him with the rest of Syria. 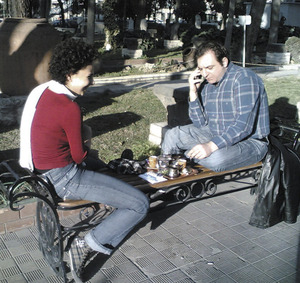 Yara and Mazen in Damascus, in happier times.

I sometimes think I know Mazen Darwish better as a rebel, as a dissident, and as an influential figure in Syrian society than I do as a husband, since the Syrian authorities did not give us the chance to spend more than five months together under the same roof. We were married on 16 September 2011, six months after the start of the Syrian revolution, and arrested in Damascus on 16 February 2012. I was released after three months. Mazen remains in prison to this day.

It was a risk he knew he was taking when, in 2004, he returned to Syria from France, where he had been living in exile for a number of years. My first fight with Mazen was about the West and Syria. I was speaking about the differences in lifestyle between Syria and Europe, but Mazen raised his voice and said: ‘You don’t know what it’s like to live as a second-class citizen.’ In truth, I did not even know the meaning of the word ‘citizenship’. Mazen knew. That is why he gave up all that France has to offer and, of his own free will, came home to fight for citizenship in his own country.

The first issue he took on was freedom of expression. Instead of speaking truth to power, Syria’s media did nothing but dictate the lessons of the regime to the people. In response, Mazen founded the Syrian Center for Media and Freedom of Expression (SCMFE), publishing journalism that challenged the lies churned out by the Syrian state.

He was not alone in these activities. The human rights lawyer Razan Zaitounah (missing since February 2014 when she was abducted by an armed group), Kurdish activist Mashaal Tammo (assassinated by the regime in the early days of the uprising in 2011), political activist Yahya Shurbaji and the writer Hussein Isso (both arrested in September 2011, whereabouts unknown)… there are too many brave Syrian activists and dissidents to name here. The centre’s lawyer, Khalil Ma’touk, remains in detention. But even in this company, Mazen stood out for the clarity with which he criticized aspects of Syrian society that many of us simply took for granted.

In the period between 2004 and 2010, Mazen’s articles offered an analysis of Syria that diverged sharply from the line peddled by the ruling élite. His analysis was revolutionary in that it challenged the state’s monopoly over knowledge. This was a regime that used its ownership of the media to control information, to limit culture, and to instill patterns of thought in the Syrian people. Mazen broke that monopoly. He took ownership of information and made it available. He wrote about human rights in the Arab world, about state control of the internet, about the link between democracy and free expression. He even told young people about scholarship opportunities.

Mazen smiled sadly, and in a voice so quiet I could barely hear it, said: ‘In freedom, you are more beautiful’

Mazen’s work was revolutionary in a deep way. He directed his criticisms not against particular individuals who happened to hold power, but against the structures and mechanisms of power itself. By exposing the state’s attempt to control knowledge, and by supplying an alternative way of seeing reality, Mazen helped break Syria’s cycle of despair.

Syrian society had been sunk in this cycle for decades. The security state, developing since the 1960s, was the only institution that thrived under the Assad regime. Through its uneducated and unenlightened members, it monitored everything: thought, publications and education – even conversations among members of the public. This constant surveillance was justified by the ‘emergency laws’, in place since 1963.

Mazen refused to allow the security state to crush our civic, intellectual and cultural life. He tried to promote the idea of Syria as a country, distinct from the regime, and to encourage a genuine sense of citizenship. That’s why he was arrested, and that’s why the Syrian authorities, despite all the international resolutions that have been adopted, refuse to release him.

This is the Mazen I know: an oval face and a shy smile, and the quiet self-assurance of a man who has chosen to fight for a more beautiful homeland. For Mazen, it was a homeland that included everybody. I remember how he would celebrate Nowruz, the Kurdish New Year, with Kurdish Syrians in the north of the country, even at a time when the regime was cracking down on these festivities. I remember, too, how much Mazen loved Damascus, how he had memorized every detail of the city as if each were a corner of his own house.

I always knew I’d have to share Mazen with the rest of Syria. Even on our wedding day he showed up late because he had become involved in a protest in one of the Damascus suburbs. I used to say to him ‘I love you, and you love 20 million people.’

He never doubted the Syrians. In 2009, at our first dinner alone together, I was complaining about the people who were frightened even to talk to us, knowing that I came from a dissident family and that Mazen was constantly being followed. But Mazen saw that the Syrians had had enough. ‘Those people,’ he said, ‘are going to make a revolution.’

Most vivid of all is the memory of a morning in the spring of 2010. It was a sunny day, beautiful as a dream, and we were laughing. I don’t know what we were talking about, but I, half-joking and with all the arrogance of young lovers, asked Mazen: ‘What is more beautiful, me or freedom?’

Mazen smiled sadly, and in a voice so quiet I could barely hear it, said: ‘In freedom, you are more beautiful.’ The sadness and conviction in his voice was enough to awaken all my fears. I respected him for his honesty and integrity. And I realized that we would walk together on this path to the end, wherever it may lead us.