Praise, blame and all points in between? Your feedback published in the October 2015 magazine. 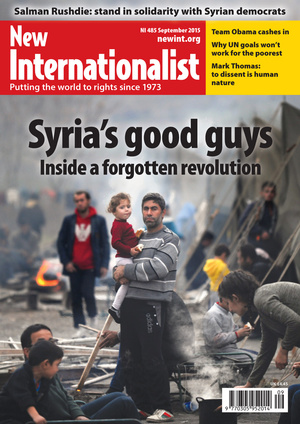 Congratulations on your September 2015 issue (NI 485). Instead of your usual cacophony of ultra-leftist rhetoric, you reported brilliantly on Syria, the MDGs, the ‘new economy’ and Team Obama. The report on Syria should be awarded a prize and be read by all world leaders.

The human and material cost of the horrific conflict in Syria has been enormous. Since 2011, it is estimated that over 200,000 people have been killed. The UN figure is higher, at over 220,000. Of these, more than 63,000 were civilians, including at least 10,515 children. The remainder have been fighters of the regime and various factions.

Despite this harrowing death toll and the huge exodus of refugees, the world has largely ignored this brutal war and remained silent, refusing to take any meaningful actions to help end the massacres, the immense devastation and the appalling suffering of the people.

I find it heart-wrenchingly sad and beyond belief that after so many atrocities of the recent past, such as the Armenian genocide and the massive slaughter of Greeks and Assyrians by Ottoman Turkey, the large-scale mass murders by Nazi Germany and Japan in World War Two, later massacres in Cambodia, Palestine, Rwanda, Argentina, Bosnia and elsewhere, and with the international community stating it would never allow such crimes against humanity to happen again, the world has done nothing to end this terrible carnage.

How much longer will the UN, the Arab League and the rest of the international community stand by and do nothing while this vicious war continues unabated? This blatant inaction is immoral and inexcusable. As much pressure as possible needs to be exerted on the world community to act and compel all parties involved to bring about a break in the fighting and create the conditions for a just resolution to the conflict that brings genuine peace, security and freedom to the people of Syria. 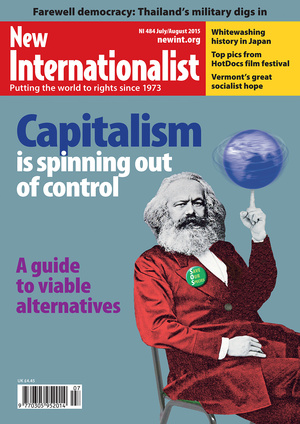 There are many inherent flaws in capitalism (NI 484) and it has long been recognized that there needs to be societal ‘adjustments’ to ‘pure capital­ism’ via the people’s representatives, the government.

The neoliberal agenda seeks to strip those adjustments by false claims about the extent of harms done by any limitations on unfettered capitalism. The results are unambiguous and the world is in big trouble as a result. However, the debate may need to focus on the lack of regulating mechanisms rather than ‘capitalism’ per se.

Alternative systems appear to demand a common motivation and level of consensus among citizens that is unrealistic. The messy free-for-all environment of a market-based capitalism has many flaws. It would appear that re-establishing mechanisms in the political realm to mitigate and counter those flaws is our best alternative. The triumphalism of the neoliberal agenda must be undone or the damage and losses will prove catastrophic.

‘Pathways and possibilities’ (NI 484) quotes the number of jobs in co-operatives in Italy. This reality is not always bright and may be many-sided and shadowy.

In the recent Mafia Capitale case, co-operatives, controlled by supporters of former extreme rightwing organizations, were found to have supplied services to Rome city council (waste disposal and assistance to immigrants), overpricing their services thanks to a corruption and bribery network involving public officers.

Judicial inquiries following the death of an agricultural worker in southern Italy found out that some agricultural co-operatives are fake enterprises hiring underpaid illegal immigrant workers.

There have been cases of co-operatives suspected of being fake enterprises set up for mafia money laundering.

In many co-operatives, wages are as poor and working conditions are as hard and jobs as uncertain as in any private enterprise aiming at owners’ profit. Their workers are often employed on a yearly basis and dismissed at year’s end with no certainty of being taken on again.

Undoubtedly, there are also co-operatives that may be considered as alternatives to private businesses only aiming at profit. Like the ones belonging to the Libera association that confiscated farm lands from mafia bosses and whose members are constantly under threat from mafia clans.

Excellent edition on capitalism (NI 484). May I add one fundamental perspective on growth?

Growth may be an ideological precept. But underlying it is a real economic imperative that must (and can) be addressed.
Briefly:

1 Most of the world’s money is no longer created by governments, who spent it productively into the economy, no strings attached. Almost all of the money we now use is created by private banks.

2 The banks rent it to us – to individuals, to corporations, to governments. They create the money, they lend it to us, but – and it is a big ‘but’ – they do not create the interest.

3 So where does the rent money – interest – come from? It has to come from the creation of new wealth – mining the earth, clearing new foodlands, constructing new buildings. To pay the rent on our money system, we must have growth. That is the ineluctable growth imperative.

So it is not mere ideology; it is a real monetary system, created by human beings under capitalism. Can NI take a look at alternatives to the world’s debt-based money supply? A non-interest-bearing money supply is an underlying requirement of any alternative to capitalism.

The content of NI 484, the main theme of which was out-of-control capitalism and its viable alternatives, made for some fascinating reading. For, sandwiched between moving accounts of what the world is really like today, there were a number of up-beat articles on how it could be.

But, I was left wondering, when will the former begin to metamorphose fully into the latter? To which the answer must be: once a more complete worldview saying that ‘We Are All One’ starts entering ‘The Collective Consciousness’!

For, surely, without this change of consciousness, there can be no fundamental change of circumstance on this planet.

Re: Country Profile on Panama (NI 484) and John Kerry’s calling it a ‘narco-kleptocracy’. Is this the same John Kerry of the Forbes family that was involved in the importation and sales of opium to China in the 1800s along with many other notable US families such as that of Franklin Delano Roosevelt?

Down with love
Letter from Bangui: Sisters of Joy
Back