Despite the recent boom, the country is still one of glaring inequalities, writes Louisa Reynolds. 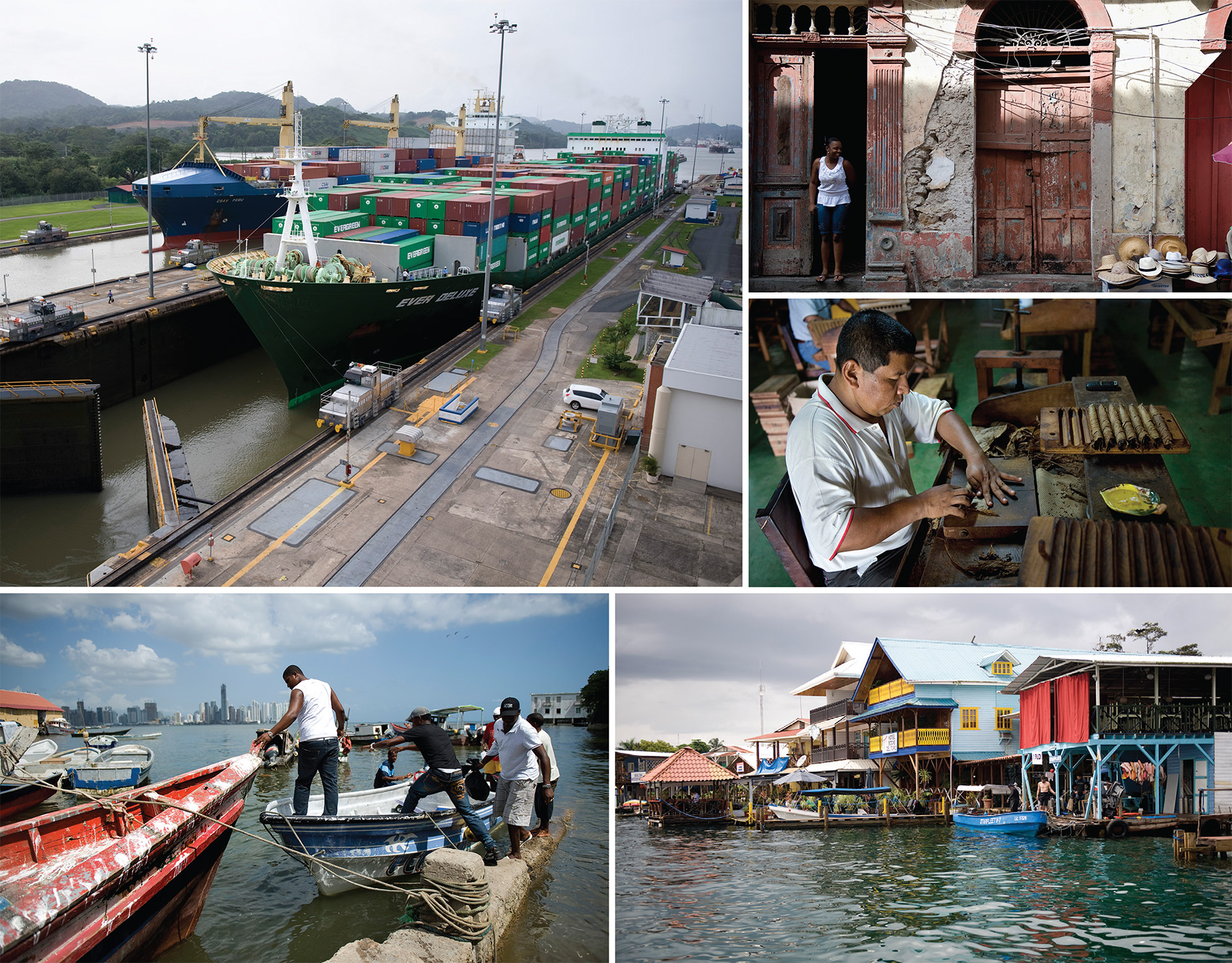 Clockwise from top left: A container ship navigates Miraflores Lock, the first of three locks on the Panama Canal. A woman looks out from a doorway in Panama City’s old quarter, Casco Viejo. A worker at the Cigarros Joyas de Panama factory in La Pintada rolls a cigar. Wooden houses along the seashore of the island of Bocas del Toro. Fishers board their boats in Panama City’s harbour; the city skyline is visible in the background.
Photos by Stefan Boness / Panos.

In 2014, conservative entrepreneur Juan Carlos Varela came to power promising to clean up Panamanian politics after his predecessor, super­market tycoon Ricardo Martinelli, was accused of awarding overpriced multimillion-dollar contracts during his period in office.

The rampant corruption is a stark reminder that Panama has a long way to go before it can shake off its banana-republic past. However, the country has remained politically stable following the turmoil of the 1980s and 1990s and, as Panama commemorated the 25th anniversary of the US invasion at the end of 2014, it was clear a lot had changed since then-senator John Kerry described it as a ‘narco-kleptocracy’.

Former dictator Manuel Noriega is languishing in prison and since the US handed the Canal back to the Panamanian authorities in 1999, the $2.5 billion a year that it rakes in has turned Panama into the fastest-growing economy in Latin America.

An ambitious expansion project due to be completed in 2016 will mean the Canal can accommodate large vessels. The aim is to double revenues over the next 10 years, consolidating Panama’s status as ‘the gateway for Latin America’.

Prosperity has also derived from the country’s reputation as a tax haven. Stringent bank-secrecy laws have wooed thousands of foreign corporations – and drug money – turning Panama into a tropical Switzerland.

Throw in a massive real-estate boom and the country’s economy is growing at an annual rate of nine per cent. With the tallest skyscraper in Latin America – a 70-storey Trump hotel and tower – lavish malls, US fast-food chains and Central America’s first subway under construction, Panama City could be Miami’s twin.

Not all Panamanians, however, have benefited from the boom. In contrast to the flashiness of the capital, the country’s second largest city – Colón, on the Caribbean coast – is a stark reminder that 40 per cent of Panamanians live in poverty. 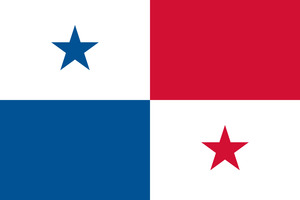 Sewage runs through the alleyways – the stench rendered more pungent by the intense tropical heat – and dilapidated colonial buildings await demolition like prisoners on death row. Although, on the whole, Panama is relatively safe compared to murder hotspots like Honduras and Guatemala, crime is rife in this languishing port city.

Unlike Panama City, Colón is pre­dominantly black and many residents believe that racial discrimination is largely to blame for the city’s stagnation.

Most tourists, however, are rarely confronted with the squalor and despair of Colón as their cruise ships dock in the city’s dazzling terminal and they get ready for a shopping spree in the Western Hemisphere’s largest duty-free trade zone.

Large-scale infrastructure projects such as the $225-million Barro Blanco hydroelectric plant have also come at a heavy social cost. Currently 95-per-cent complete, Barro Blanco has been the source of a bitter feud between Genisa, the contractor for the dam, and the Ngäbe Buglé indigenous group, which is strongly opposed to the project on environmental grounds.

Indigenous communities fear the dam will flood their autonomous territory or comarca, endangering the livelihoods of some 5,000 farmers who rely on the Tabasará River for potable water, agriculture and fishing.

A week of violent clashes between protesters and the police in February 2012 left two demonstrators dead and a deep sense of mistrust between the government and indigenous communities. With more than 80.5 per cent of indigenous Panamanians living below the poverty line, indigenous people are the most excluded segment of the population.

Panama may no longer be a ‘narco-kleptocracy’ but it remains a country of glaring inequalities that if not addressed could burst the bubble of the country’s boom in years to come. 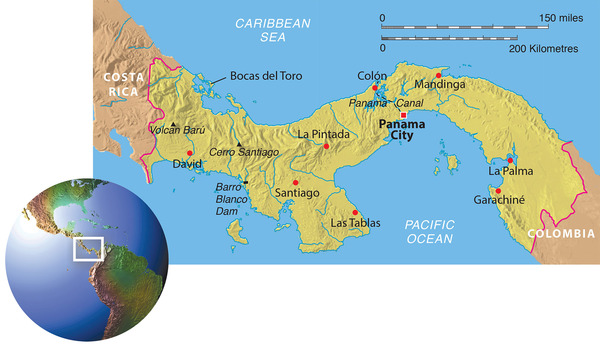 Leader
Juan Carlos Varela.
Economy
GNI per capita $10,700 (Costa Rica $9,550, United States $53,670).
Monetary
The balboa is tied to the US dollar, which is also legal tender in Panama.
Main Exports
Gold, bananas, shrimp, sugar, iron and steel waste, pineapples, watermelon.
People
3.9 million. Annual growth rate 1.35%. People per square kilometre: 52.
Health
Infant mortality 15 deaths per 1,000 live births (Costa Rica 8, US 6). Lifetime risk of maternal death 1 in 450 (US 1 in 1,800). HIV prevalence rate 0.7%.
Environment
Panama loses more than 1% of its primary forest cover every year as a result of road construction, logging, industrial goldmining and clearing for agriculture and pastureland. Deforestation threatens one of the country’s main sources of income, as the tropical forest of the Canal watershed ensures the flow of two billion gallons of water per day necessary to operate the Canal’s locks.
Religion
Catholic 72%, Protestant 19%, other religions 5%, no belief 4%. The constitution and other laws protect religious freedom. There are no reports of discrimination based on religious affiliation.
Language
Spanish is the official language. A minority of Panamanians speak indigenous languages such as Buglere, Embera and Ngabere, as well as other languages such as Japanese, Hebrew, Arabic, Eastern Yiddish and Korean.
Hdi
0.765 (Costa Rica 0.773, US 0.914).

Income Distribution
Despite the Canal income, glaring inequalities persist and almost 40% of the population lives in poverty.
1996
Life Expectancy
78 years, up from 75 in 2000. The murder rate has dropped by 19% over the past five years and is well below murder hotspots in the region such as Honduras and Guatemala.
1996
Position Of Women
Although Panama has had a female president and a number of women have held top posts in government and education, domestic violence remains a serious problem and conviction rates are low.
1996
Literacy
94%. Enrolments in the upper levels of schooling have increased strikingly since the 1960s.
1996
Freedom
Indigenous leaders opposed to hydroelectric projects suffer harassment and intimidation, and several protesters have been murdered. The government has attempted to silence criticism of public officials. Prison conditions remain harsh and in some cases life-threatening.
1996
Sexual Minorities
Homosexuality has been legal since 2008 but there is no recognition for same-sex couples and no laws protecting gay people from discrimination.
Politics
After only a year in power, President Varela has been embroiled in a series of high-profile nepotism and corruption scandals. For many Panamanians, this has proved that the new government has failed to bring about a significant improvement in transparency and accountability. Although democratic institutions have improved significantly since 1998, corruption remains a major problem. An independent judiciary is still lacking.