Women on the frontlines of climate change at COP21 and beyond

Women are rising up across the globe to say, ‘we are not just victims, we are the solution!’, writes Osprey Orielle Lake.

This week thousands of people are gathering in Paris for the United Nations climate conference, where world governments will work to finalize an international agreement with critical implications for what we, as a species, will experience living on this planet in the years to come. For the health of the earth and all generations, present and future, it is paramount that we seize this moment and recognize that there will be no effective action on climate change until women’s struggles, solutions and leadership are at the forefront.

Women comprise a disturbing 80% of global climate refugees displaced since 2010 as a direct result of climate change. When rivers dry up, when toxic material spills from pipelines – women are impacted with disproportionate severity. In part, this is because women’s bodies are more susceptible to the dangerous effects of contamination. However, the bottom line is that women are more harshly impacted by climate change because they continue to face repressive social norms and limits on their rights, decreasing their mobility, voice and ability to respond to climate disaster. 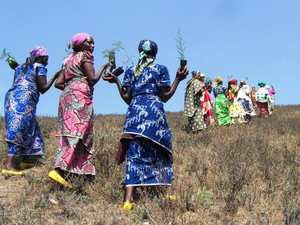 In so called ‘developing’ nations, climate pressures intensify burdens on millions of women who hold primary responsibility for providing food, water, medicine, and energy for their families. Adverse climate impacts are greatest for the many Indigenous women and women in the Global South who maintain a direct reliance on Nature and primary resources for their physical survival, as well as for their social and spiritual grounding. Tragically, in some frontline communities, sexual violence connected to extractive industries is heaped on top of other devastating climate impacts.

Climate change impacts the poor first and worst, and women make up the vast majority of those living on less than a dollar a day, itself a symptom of the obstruction of women’s rights. There are clear systemic links between the climate crisis, our economic model and the ongoing exploitation and disempowerment of women.

For long-term climate solutions, global peace and societal transformation, it is thus vital that we challenge old paradigms of patriarchy, imperialism and capitalism – all based in great part on power over and violence against women and the planet.

Despite the immense challenges faced, women are rising up across the globe to say, ‘we are not just victims, we are the solution!’ – and they are absolutely right. From the Amazon Rainforest to the islands of the Pacific, women are on the frontlines of struggles for the health of their communities and the Earth.

Critically, women are reminding us that we cannot take meaningful steps to address climate change using the same top-down, profit-driven frameworks that got us into this crisis. In their daily work both inside and outside of the home, women are modeling small-scale, decentralized solutions that are so vital to our collective survival.

Women are central to launching renewable energy projects, restoring destroyed lands, organizing community forums, revitalizing local economies and working to re-write our cultural narratives. They are seizing their role as primary providers of water, medicine and food, and using their skills and passion to defend these vital gifts.

In North America, women decide 80% of all purchases, giving them unique leverage to push for local economies, renewable energy and decreased consumption. At the international policy level, research involving 130 nations demonstrates that countries with a higher number of female parliamentary representatives are more likely to ratify environmental treaties.

In light of recent attacks in Paris and Beirut and other cities, connections between war, peace, women and climate also bear mentioning. Many modern conflicts have resource extraction at their root and some, like the crisis in Syria, can be linked in part to escalating climate pressures. Involving women in peace building has been found to increase the probability that violence will end by 24%. More than ever and in so many manifestations, we need women at the forefront.

Armed simultaneously with immense climate vulnerability and indispensable leadership, it is clear why women’s voices must come to the center of climate decision-making and action.

The degree to which a gendered perspective will be recognized by governments during upcoming Paris climate talks remains to be seen, however what is certain is that a diverse, bold coalition will be advocating ceaselessly to demonstrate the critical solutions that global women are bringing to the table.

Through events, assemblies, advocacy and peaceful demonstrations, women will work to raise up their voices to the forefront of policymaking, while also recognizing that we cannot argue or buy our way out of the climate crisis. Nature is not waiting for politicians to negotiate – nor is the people’s movement for climate justice.

We stand in a revolutionary and evolutionary moment. With women’s equal leadership and attention to issues of justice, we may still have time to create the world we envision.

The Women’s Earth and Climate Action Network, International (WECAN) will be advocating for climate policies founded on gender equality, human rights, Indigenous Rights and Rights of Nature in Paris. The comprehensive Women’s Climate Action Agenda and details about WECAN events during COP21 are available at: wecaninternational.org

Osprey Orielle Lake is the Co-Founder and Executive Director of the Women’s Earth and Climate Action Network (WECAN) International, and Co-Chair of International Advocacy for the Global Alliance for the Rights of Nature. She is the author of the award winning book “Uprisings for the Earth: Reconnecting Culture with Nature.” Follow on twitter @WECAN_INTL