Global South struggles against climate change need to be placed at the heart of our campaigns, writes Samir Dathi. 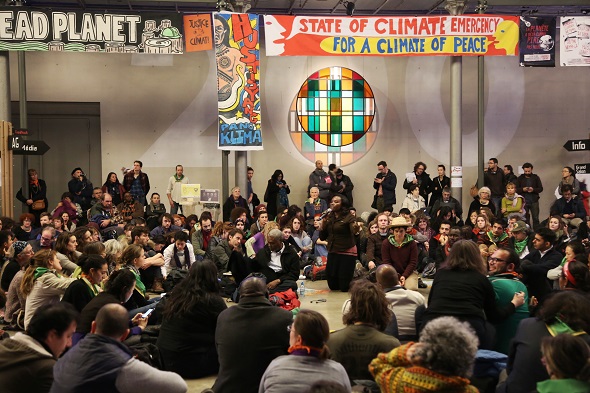 A discussion and debate on food security at la Zac. A woman from a coastal community in Kenya speaks during the assembly.
Photo: © Kristian Buus

Climate change is the atmospheric expression of class war. As capital colonizes the earth, extracting fossil fuels and destroying ecosystems in its search for profit, the first to fight and the first to die are always the poorest nations and most oppressed people of the earth. It’s not surprising then that people of colour are hit hardest. If we want to win, their struggles must be at the heart of our campaigns.

The climate movement in developed countries has come a long way in understanding this in recent years, not least since the Copenhagen sell out highlighted the necessity of system change. Many major organizations (Friends of the Earth being a notable example) do valuable work supporting frontline activists from the South: the battleground called ‘Blockadia’.

Sadly, certain sections of the climate movement still don’t get it. This was brought into sharp relief when organizers of the 29 November climate march in London shamefully reneged on a previous agreement that the Global South bloc, Wretched of the Earth, lead the procession.

This is not only a moral wrong – it's bad strategy: Global South and indigenous resistance by frontline communities has blazed a trail for climate justice. What follows touches on just a few examples, to serve as a timely reminder of the intersectionality of our fight.

In the 1950s, transnational companies, most notably Shell, began extracting oil in Ogoniland in the Niger Delta, causing untold damage to the locals and their environment. This sparked an uprising under the banner of the Movement for the Survival of the Ogoni People. Ken Saro-Wiwo, poet turned activist, was a leading figure for this movement. His courage gave thousands of his comrades the will to fight. At the height of the movement, a 400,000 strong protest terrified Shell and the Nigerian government, which responded by burning villages and massacring Ogoni, displacing at least 80,000.

Saro-Wiwo was eventually hanged in 1995 by the Nigerian state, with the encouragement of Shell, on trumped up charges. This year is the 20th anniversary of his death. But he did live to see the Ogoni drive Shell out from their homeland. And although oil pollution continues to devastate local communities, there has been no drilling in Ogoniland for 20 years. Meanwhile, human rights advocates have brought a series of successful and landmark lawsuits against Shell for its atrocities. A case brought by four Nigerian farmers and Friends of the Earth Netherlands and Nigeria is ongoing.

The Ogoni’s struggle inspired the climate justice movement around the world and, perhaps more than any other, given indigenous and Global South peoples far and wide the audacity to resist.

The liberal media is presently lavishing praise on Obama for denying the Keystone XL Pipeline, which was set to carry the world’s dirtiest energy, bitumen, from Alberta to Illinois. It would have meant game over for the climate.

But the native and frontline activists who fought the proposal every step of the way are the real heroes. First Nations’ homeland would have been bulldozed and polluted by the project. For example, the planned pipeline would have trampled Rosebud Sioux tribal land. As the tribe’s president Cyril Scott put it: ‘Authorizing Keystone XL is an act of war against our people.’

One of the leading native groups involved in the resistance was Idle No More, a movement founded and led by women in 2012 to oppose legislation from Stephen Harper’s right wing government, which threatened indigenous rights. The group is described as ‘the largest and most sustained affirmation of aboriginal determination and culture in Canadian history.’ In helping to take down this flagship project, Idle No More’s victory reverberated across the world; and the teach-ins, roadblocks, flash mobs and mass marches they organised inspired a wave of solidarity protests outside Canada.

And it’s not just the First Nations of Canada who are leading the fight for climate justice. In a host of countries across the Americas, natives are fighting on the frontline to defend their homelands and indigenous rights against mining, water privatisation, fossil fuel extraction and deforestation.

Take Neuquén in Argentina, a province fabulously rich with shale oil. It is also the home of Mapuche people. In 2013, the oil giant Chevron signed an agreement with state owned YPF to begin resource extraction there. Unsurprisingly, the Mapuche weren’t consulted. Past extraction activities in the area had already caused major ecological damage and poisoned dozens of people.

The Mapuche people have since launched a courageous campaign of resistance. In August 2014, police attacked a Mapuche mobilisation against the project, firing tear gas and rubber bullets into the crowd. But state repression only strengthened the movement and shortly after, 10,00 were marching in protest.

In the face of immense public pressure, 50 municipalities have passed fracking bans creating a power struggle between local and national government officials. Most of these municipalities are situated near the massive Guarani Aquifer, which supplies water to Argentina, Brazil, Uruguay and Paraguay. Fracking would likely pollute this important source of water. The Mapuche’s struggle continues to gather momentum and growing support from international solidarity actions.

Across the Subcontinent, the reckless expansion of coal plants and coal mines are dispossessing communities, destroying the forests, and ruining the lives of those left in their wake. But it hasn’t been plain sailing for the industrialists.

One remarkable example of popular resistance is the case of the Sompeta plant in Andhra Pradesh. In 2008, The Nagarjuna Construction Company was allotted a tract of wetland to set up a plant. These wetlands were the livelihood of the local community, particularly fisherman and farmers. Locals founded the Paryavaran Parirakshana Sangham to resist the project, staging a wave of spectacular hunger strikes and protests. Things came to a head in July 2010 when 5,000 police cracked down on a 3,000 strong demo, murdering three villagers and injuring over 100. Public opinion turned rapidly against the corporation, and the state suspended the project.

Protests continued until October 2015, when the right-wing BJP government finally conceded to the people’s demands and assured only eco-friendly projects take place in the area. The land grab was defeated.

We know that the Syrian conflict is complex: triggered by Assad’s brutal crackdown of a revolutionary movement in 2011, and further fuelled by warring imperialisms and religious extremists. However, we are less familiar with another driver of the conflict: climate change.

The years that preceded the 2011 uprising were marked by an unprecedented drought that contributed to the cauldron of dissent. Even Prince Charles and John Kerry have highlighted climate change’s role in Syria (although they both obviously omit to mention the role of Western imperialism). This is why some scientists describe this as a ‘climate war’.

Many are also unfamiliar that in the midst of the carnage, revolution is taking place in the Kurdish region in the north, Rojava. Anti-capitalists, organized within the PYD/YPG, have been fighting to establish a radically democratic society. They have been simultaneously defending their revolution from reactionary forces, not least ISIS and Turkish imperialism.

The Rojava movement has been inspired by the anarchist Murray Bookchin’s, social ecology, a set of ideas which hold that humankind’s destruction of nature stems from the domination of human by human under capitalism, and that the only way to resolve this ecological crisis is to break down all hierarchies such as class, gender, race, and establish an egalitarian society based on mutual aid, caring and communitarian values.

The Rojava revolution is in its early stages and it has its challenges, but it arguably represents the most promising anti-systemic struggle in the world today. It is also a shining example of how our fight for climate justice is inseparable from our fight against all forms of oppression.

Sámi grassroots fight for indigenous rights in Paris
At COP21, the people and future generations will be failed once again
Back