At COP21, the people and future generations will be failed once again

The Paris Agreement shows how powerful nations have imposed their will at the climate negotiations, writes Clemente Bautista. 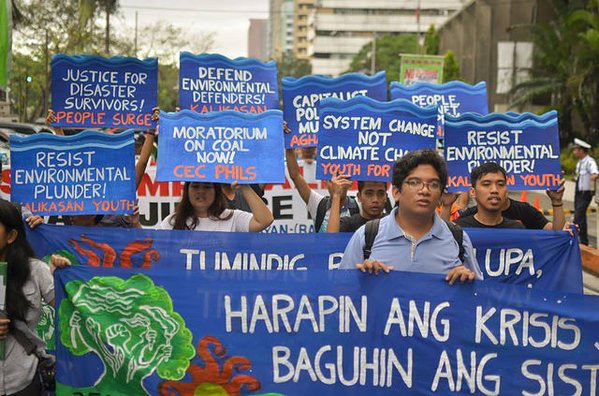 Filipino climate and environmental activists helped mobilize thousands during the global people’s climate march during the weekend before the opening of COP21.
Photo by Loi Manalansan/Kalikasan

As many people anticipated, the United Nations Framework Convention on Climate Change’s 21st Conference of the Parties (COP21) – deemed the last chance for an urgent agreement to address climate change – is at the brink of failing the people and future generations once again. Instead of providing solutions, COP21 has negotiated a future that is still on path to heating earth from 3 to 7 degrees Celsius (°C) within this century.

Top polluters led by the United States, European Union, Japan, Russia and China dominated the climate negotiations. They have successfully imposed their will to all the 190 members of COP21.

Emissions is business as usual

In 2015, the earth has already heated up to 1°C above pre-Industrial Revolution era levels. In order to meet the 1.5°C target to avert a catastrophic, runaway climate shift, the scientific consensus states that we should maintain a 350 parts per million (ppm) greenhouse gas concentration in our atmosphere. On November 2015, we are already at a very alarming 400.16 ppm.

COP21 has essentially doomed that 1.5°C target, as negotiators failed to ensure binding, obligatory, quantifying, and drastic greenhouse gas (GHG) emissions cuts from the top polluter countries and corporations, such as the industries of fossil fuel and mineral extraction, power generation, transportation, and agri-industrial plantations.

While the agreement encourages the development of alternative and clean energy and other technologies for climate mitigation and adaptation, industrialized countries continue to dictate its governing framework and regulations. Technology transfer to poor and developing countries is still contingent on the prerogative and conditions of the advanced capitalist countries.

Expect the rampant promotion of ‘clean coal’, nuclear power, mega dam, and carbon capture and storage technologies as part of the climate mitigation efforts. These ‘repackaged’ dirty and destructive technologies are part and parcel of the corporate greenwash that allows for a ‘more business than usual’ approach.

Climate change’s enormous elephant in the room, the global Military Industrial Complex (MIC), is next to the power industry in its GHG emissions. The $1.75-trillion MIC is not included in the sectors that must urgently comply for carbon cuts, and is in fact not mentioned at all throughout the draft agreement.

Most COP21 negotiators and campaigners have failed to see the inextricable links between the fossil-fuels industry and the MIC. Fossil fuel firms, petro-oil companies and military industrial corporations have common areas of interest and clear financial stakes in fossil fuel-rich regions of the world like Middle East Asia and Africa.

The biggest state military spenders like US, China, Russia, and the European Union are ecstatic. US and European wars of aggression and military interventionism in Iraq, Afghanistan, Libya, and Syria operate in the guise of the war on terrorism, but is actually a war to grab fossil fuels and other natural resources, as well as trade routes in the conflict regions.

The injustice of INDCs adopted

What the climate agreement contains as commitments is the merely voluntary Intended Nationally Determined Contributions (INDC) of the COP parties. The INDC is premised on different conditions made by the committing countries.

Even if all the countries implemented their INDC commitments, it falls far short of the needed GHG emissions to keep global temperature below 2°C, and will allow for GHG concentrations to continue to rise up to 2030 and most likely beyond.

The Paris agreement has failed to uphold the principle of common but differentiated responsibilities and respective capabilities (CBDR-RC), the landmark principle of justice enshrined in the previous climate protocols. Polluter countries sought to kill CBDR-RC to avoid their responsibilities to take a bigger slice of the emissions cuts, and to unconditionally provide climate reparations for the adaptation of vulnerable countries like the Philippines.

Coinciding with the rejection of the CBDR-RC is the reduction of the principle of human rights, especially the indigenous people’s right to self-determination, to tokenistic mentions in the agreement draft. Agriculture, the foundation of various vulnerable countries’ economies across the world, and the climate-impacted countries’ demand for mechanisms on damage and loss, suffer the same fate.

No recognition was made for the Rights of Nature, a legal concept already adopted in the constitutions of Bolivia and Ecuador recognizing the inalienable rights of ecosystems to exist and flourish. The Rights of Nature give people the authority to petition on behalf of ecosystems, and require governments to remedy violations of these rights.

Despite international figures such as Bolivian president Evo Morales and Pope Francis speaking out against the global economic, social, political, and cultural systems that have perpetuated the climate crisis, COP21 wilfully ignores the systemic roots of the climate crisis in global capitalism. The globalization policies of trade liberalization, privatization, and deregulation have impoverished billions of people, and have aggravated climate pollution and disruption.

Indeed, there is no real debate between the industrialized nations (classified as Annex 1 in the climate talks) and the so-called emerging economies. This is global capitalism at work – ‘CO2lonialism’ to some, imperialism to many – nothing but the competition among corporate interests in these various nations feeding their fossil addiction, playing out in the global theatre of COP21. The poor and dispossessed suffer in the process.

COP21 negotiators are looking at the Paris agreement with rose-stained glasses. The truth is that we have is a negotiated failure that has ignored sound science and justice.

But in spite of the bleak scenario imposed by big capitalist countries and their corporate polluters, there are various nations, frontline communities, and people’s movements are resisting imperialist plunder and ‘CO2lonialism’ to keep humanity and the entire planet safe. Costa Rica has legislated a moratorium on fossil fuel exploration and mineral extraction in their country. The island nation of Kiribati has proposed a global moratorium on coal. The Ogoni people of Nigeria have successfully kept oil companies out of their lands for years.

In our country the Philippines, indigenous people, peasants, and environmental groups have successfully stopped large-scale mining projects. Local government units have issued local laws to stop the entry of mining corporations. Maoist guerrillas and indigenous groups that have declared pangayaw (tribal war) against development projects and their military and private troops are preventing the entry and expansion of mining corporations, agricultural plantations, and commercial logging operations.

The whole range of people’s struggles all contribute to keeping the remaining fossil fuels under the ground, protecting our forest from deforestation, and preventing the pollution of our rivers and seas. There is a growing call for these peoples and nations with initiatives to uphold climate justice be recognized as Annex 0 – exemplary countries and communities leading the struggle for a climate-safe future.

The Annex 0 initiative demonstrates what the people can do to protect Mother Earth from destruction, plunder, and climate disruption, if they will unite and collectively take action against imperialist plunder and corporate greed. Now that COP21 is all but dead, we must urgently break away from the failures that it seeks to impose on the world. Another world is possible.

The first to fight, the first to die
COP21: The Good, the Bad & the Ugly